As the coronavirus cases continue to rise in America, the US government has advised people to work from home. But working from home is not a privilege everyone has.

Only one in four US workers have a job that allows them to work from home according to the American Time Use Survey from the Bureau of Labor Statistics. The survey, which was last conducted in 2017-18 asked workers aged 15 and over whether they were able to work from home and just 28% said yes.

Of course, Covid-19 is likely to change these numbers, as many employers are forced to rethink their business practices completely. However, the survey still gives an insight into who in the US has greater employment flexibility in these difficult times. 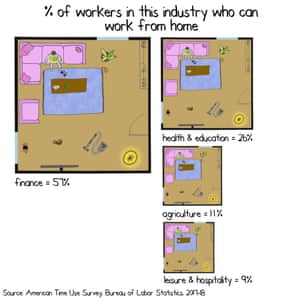 After finance, those working in professional and business services were most likely to say they could work from home (53%) followed by information (also 53%). The industries where workers found it most difficult to work from home were leisure and hospitality (just 9% of whom were able to work from home), as well as agriculture, forestry, fishing and hunting (11%).