The controversial campaigner has announced that he is fleeing the UK. He was also jailed for two months in 2019. Here's more about him. 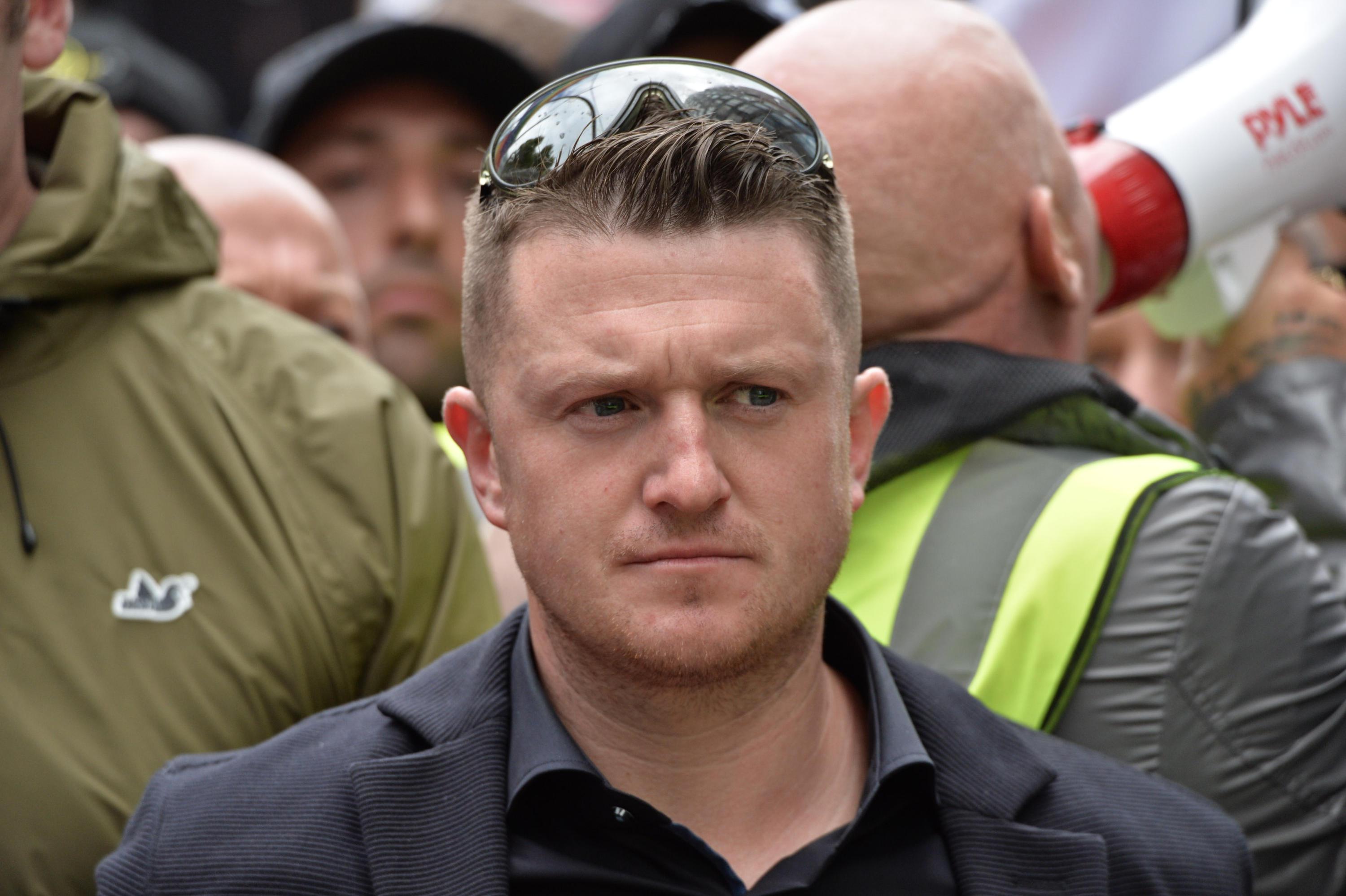 Who is Tommy Robinson?

Tommy Robinson, whose real name is Stephen Yaxley-Lennon, 36, is a right-wing political activist from Luton, Bedfordshire.

His mother was an Irish immigrant who worked as a baker while his adoptive father worked at a local Vauxhall car plant.

He told the Telegraph in 2013: "Everyone in Luton is the son of immigrants. Whether it be Irish, West Indian, Ghanaian, everyone I know.”

Despite performing well academically at school, Robinson repeatedly found himself in trouble as a teenager, citing fights with "Muslim gangs" as one of the reasons for his "problems" as a youth.

He is best known as the former leader of the English Defence League (EDL), a far-right street protest movement.

The group – which the former British National Party (BNP) member co-founded in 2009 – are opposed to the spread of “militant Islam”.

He also has a criminal record with convictions for a number of offences, including football-related violence, trying to travel on false documents and a protest against Fifa’s decision to stop the England football team wearing poppies on their shirts.

He was recently charged with assault after an altercation in March 2020 at Center Parcs at the pool in Woburn Forest where he "smacked" another holidaymaker in front of families. 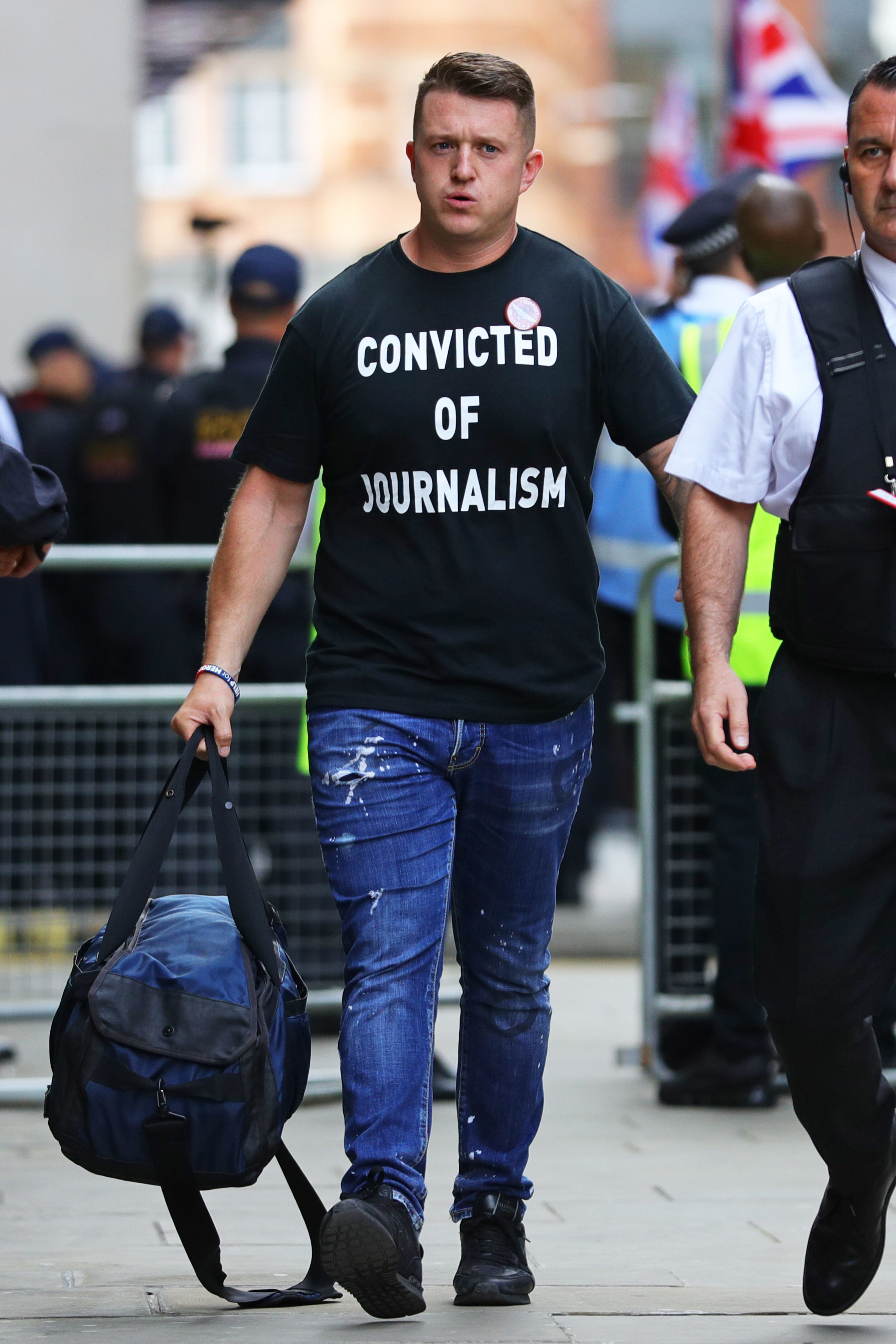 On January 17, 2019, Robinson announced his YouTube account adverts have been suspended in a bid to stop the far-right activist generating cash.

And then his Facebook and Instagram profiles were removed because he posted "in ways that violate our policies around organised hate".

He has been to prison on multiple occasions including in 2014 for mortgage fraud.

Robinson was jailed on July 11, 2019, for nine months over contempt of court for live-streaming a video outside a child grooming trial.

After studying aircraft engineering for five years, Robinson lost his job at Luton Airport in 2003 after punching an off-duty police officer during a drunken row.

He claims that stricter security measures following the September 11 terrorist attacks in 2001, meant he has been blacklisted from working at airports.

Robinson was captured on film repeatedly punching a man in the head at Royal Ascot.

The activist was banned from Twitter on March 28, 2018, for breaching the social media platform's "hateful conduct" policy. 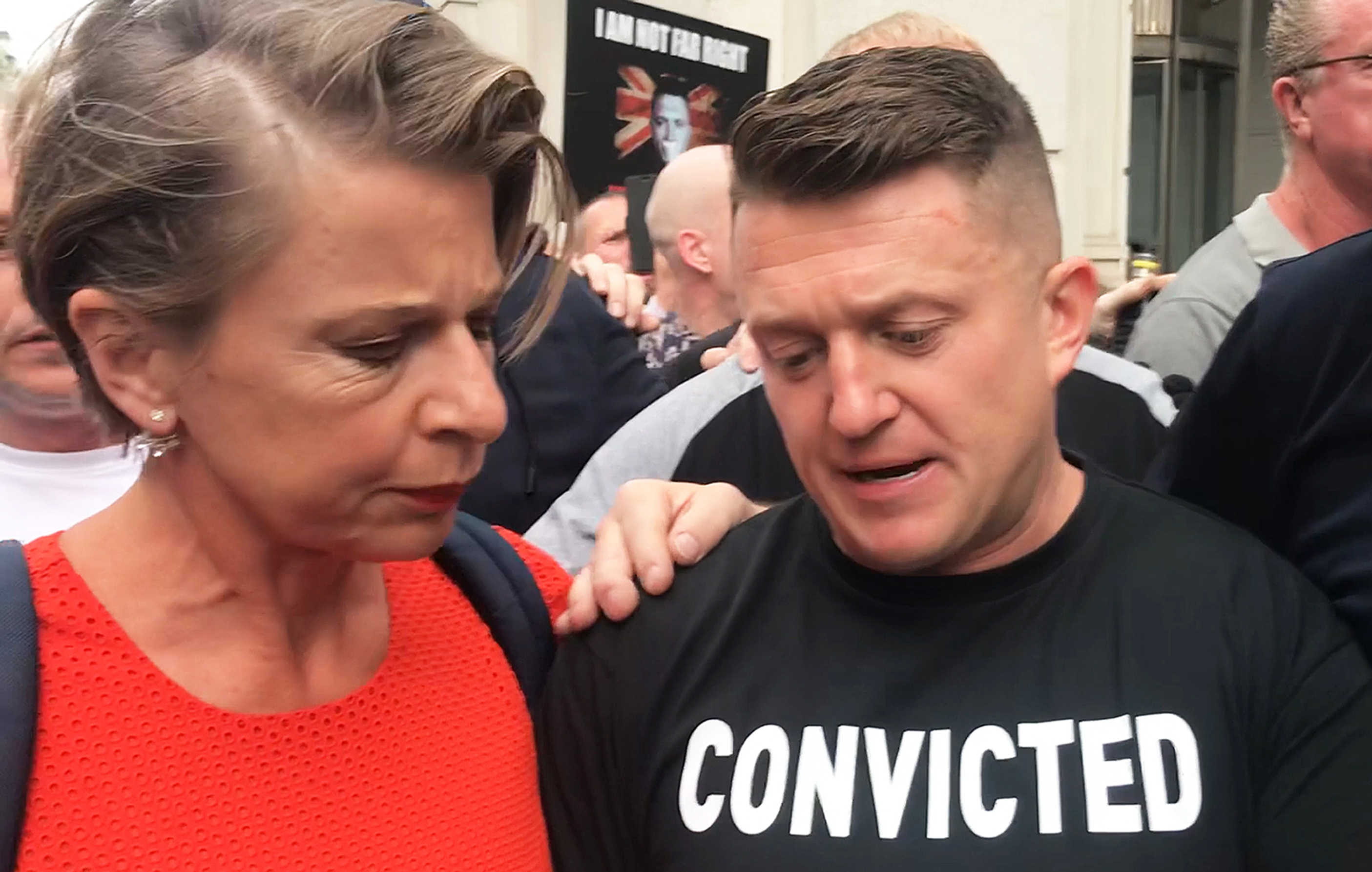 The video appears to show two groups arguing, with 37-year-old Robinson walking towards the fan and punching him outside the Estádio D Afonso Henriques.

Robinson then appears to tell the England fan "you'll get knocked out again bruv".

The far right figure, who was wearing a camouflage jacket at the time, shrugged off criticism as one man could be heard telling him "there's no need for that, is there?"

A supporter could be heard yelling "go on Tommy lad".

At the time of the attack, it did not appear that the fan was in Robinson's face.

Instead, the divisive figure can be seen walking up to him and unleashing the sudden strike to the fan's face.

He is married with three children.

Why did he move to 'Spain'?

Robinson is believed to have driven and moved to Spain, based on his reference to a recently imposed 14-day quarantine.

Speaking in a clip, he said: "I had an incident quite a few weeks ago. An arson.

"I was targeted against my wife's property and at that point we left the country straight away.

"I'm looking at relocating my family and that’s pretty hard to do. Especially with Covid.

"Obviously my wife has had enough, someone has given us somewhere to stay."

The right wing activist said he has even sorted new schools for his daughters, adding: "I'm still in the process of finding a permanent relocation for them.

He will not return to the UK for a planned demonstration this weekend in order to be with his family.

He explained: "I was due to be flying back for the demonstration, but now with this 14-day quarantine, I probably won't get back out and my kids are out here."

Mr Robinson, who expressed his support for right-wing hooligans who went to London to defend monuments last month, said the attack happened after the protests.

Speaking of the 'arson' he said: "It was after all the BLM stuff. I think I know who it was."

The video update from Mr Robinson has been shared online thousands of times.

It comes after the right wing activist was banned from Twitter and Facebook last year for violating their community standards.

The details of his alleged arson attack have not yet been verified.

What's his real name and why did he change it?

Robinson's real name is Stephen Christopher Yaxley-Lennon, but he has been known to use several aliases, including Andrew McMaster and Paul Harris.

He claims he started using multiple identities during his time with the EDL for protection after threats of violence against him.

He headed the group from 2009 until October 8, 2013 when he was persuaded to leave the organisation after speaking with anti-extremist think tank Quilliam.

Robinson later went on to claim he was paid £2,000 per month for Quilliam to take credit for his leaving the EDL.

In 2015, he was also involved with the founding of the UK branch of German anti-Islam pressure group Pegida.

But he stepped down from his role with this organisation as well, saying he wanted it to be more “middle-class” than the EDL.

He now works as a journalist for Canadian right-wing news organisation The Rebel Media and owns a sunbed shop in his home town of Luton. 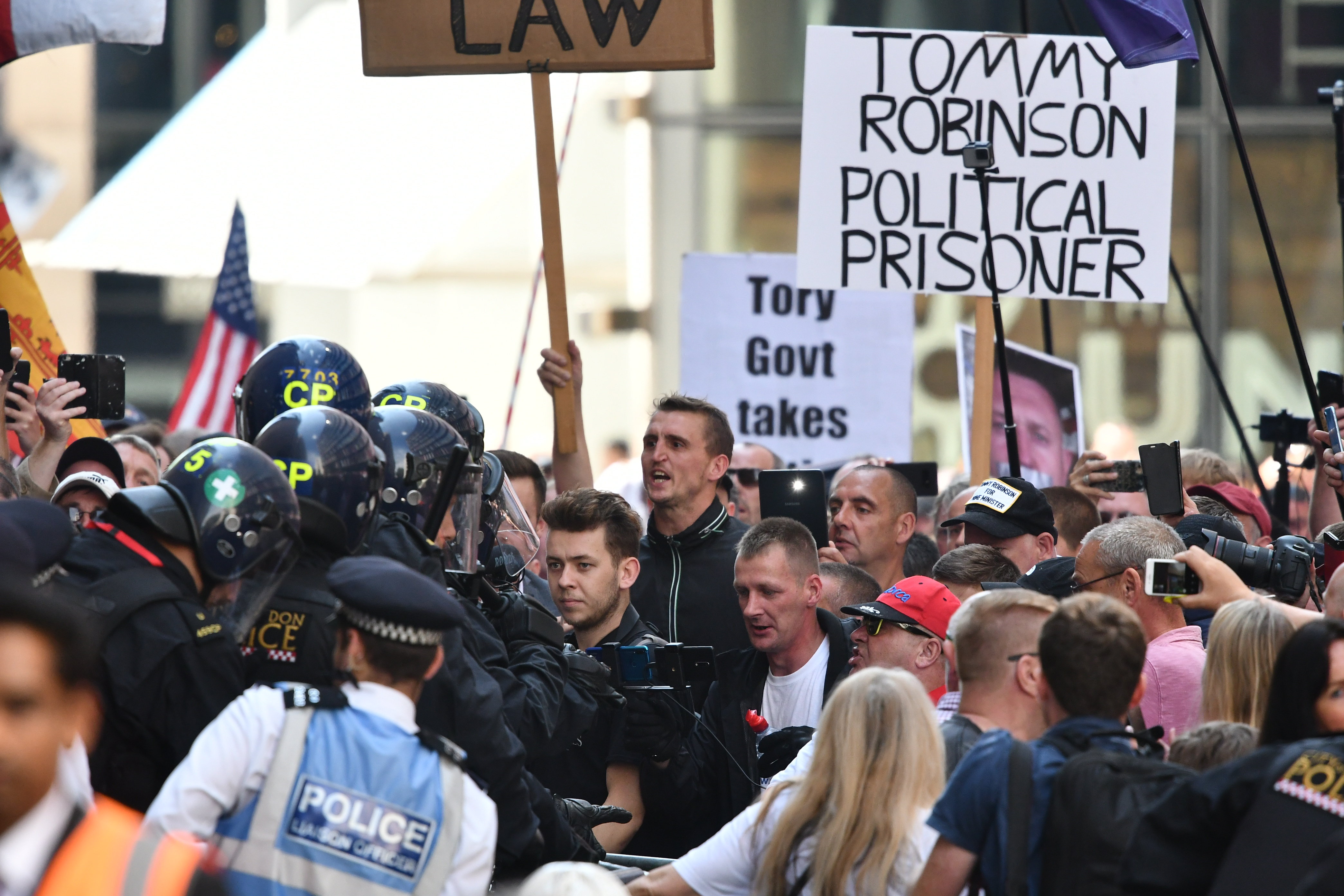 Robinson was jailed for nine months on July 11, 2019 after being found guilty of contempt for live-streaming a video outside a child grooming trial.

He was found to have "encouraged mob rule" when he breached a reporting restriction over the case.

Robinson's sentence will see him serve about two and a half months in prison on time served as he will be released on licence after ten weeks.

Robinson had previously claimed in court he would be killed in revenge attacks if he was put behind bars.

Katie Hopkins was among those to support Robinson, pictured hugging him before he walked inside.

It comes after Robinson's supporters faced off with cops when he was found guilty of committing contempt of court.

The two-day hearing at the Old Bailey found the 36-year-old jeopardised the grooming trial by live-streaming men accused of the sexual exploitation of young girls on Facebook, in breach of a reporting ban, outside Leeds Crown Court in May 2018.

Robinson branded himself a "ginger cowardly convert" as he was freed from prison today after just two months.

Robinson was caged for nine months – reduced to 19 weeks- in July for contempt of court after live-streaming defendants outside a sex-grooming trial.

And he immediately began ranting about his sentence when he was released  – claiming it was an "embarrassment against the government".

But he joked about his new look and said the "first stop" for him was the hairdresser, adding: "I know – have fun with your memes!"

Robinson – real name Stephen Yaxley-Lennon – spent 66 days inside Category A prison Belmarsh, which has been home to Britain's most grisly inmates including Soham killer Ian Huntley.

What's his connection to Ukip?

Robinson was appointed as an adviser to Ukip on the issue of grooming gangs in November 2018 despite having been a founder member of the EDL.

Ukippers who want him to become a member have pushed a vote on his membership of the party back until after the UK leaves the EU.

The party's leader at the time Gerard Batten said he was "looking forward to working with him" and he has "great knowledge" in the area.

Ex-Ukip leader Nigel Farage said Mr Batten had a "fascination" with Robinson and Islam and he was "appalled" he would be advising the party, saying he's dragged it too much to the right.

The Brexit-backer said he'd be writing to the NEC to urge a vote of no confidence in him and shuck him out as leader as he was dragging the party "in a shameful direction".

He told Radio 4's Today programme: "It goes against everything I did as leader… [having Tommy Robinson in the Brexit debate] will damage the Leave cause in this country.

Batten stepped down as leader after the European elections.