Even war has rules. But the International Criminal Court’s chief prosecutor is already in Ukraine gathering evidence for a war crimes case against Putin and his troops.

Even war has rules. Within two days of Russia invading Ukraine, the International Criminal Court was already investigating reports of war crimes there, including the bombing of schools and hospitals.

US President Joe Biden has called Russian President Vladimir Putin a war criminal. UK Prime Minister Boris Johnson and Australia’s foreign minister Marise Payne say Putin must be held to account for war crimes against Ukrainian civilians. Russia has been accused of using weapons banned in other countries such as cluster bombs, and there are fears the invaders may yet resort to chemical weapons or increase attacks on nuclear plants, as they step up bombardment of cities in the face of fierce Ukrainian resistance.

So what might a war crimes prosecution involve – and could Putin find himself on trial at The Hague? 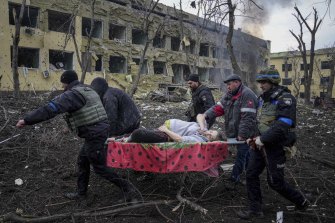 The pregnant woman captured in this photo taken after Mariupol’s maternity hospital was shelled died with her baby.Credit:AP

What are war crimes?

Soldiers and nations at war operate under the Geneva conventions, a code first established in 1864 and extended since the world wars, as well as other international treaties. The laws of war are not designed to end it, explains UWA Law School’s Dr Melanie O’Brien, but to protect those not taking part in the fighting such as civilians, doctors, wounded troops or prisoners of war.

“People will kill other people during conflict,” she said. “What’s not allowed is murder.” It is illegal to deliberately blow up a hospital, for example, use civilians as shields or kill someone who is “hors de combat” (out of combat).

“The target must be a military objective,” O’Brien says.

“It’s quite striking how rampantly Russia is violating” the treaties they are party to, she notes. As well as bombing schools and hospitals and kidnapping mayors, Russia has attacked high-risk nuclear power plants. It has used indiscriminate weapons on cities –“dumb bombs” without precision targeting and cluster bombs that contain many munitions. It’s as if Russia “has a checklist,” O’Brien says, “and they’re going through, ticking off the laws of war and violating them”.

The ICC was set up 20 years ago in The Hague with the authority to prosecute war crimes, genocide, and wider crimes against humanity (such as the murder, torture or rape of civilians). Its chief prosecutor, Karim Khan, is now in Ukraine gathering evidence and told CNN that “the law is clear on this, it is a crime to intentionally target civilians [and] civilian objects”. But he added that the burden of proof remains high – beyond reasonable doubt – and the process is yet to play out. 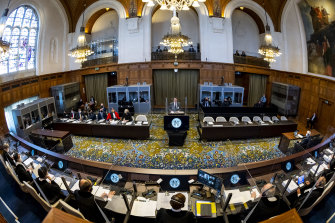 Thirty-nine states have referred the invasion of Ukraine to the International Criminal Court, pictured here at a public hearing on March 7, which has already opened an investigation.Credit:Getty Images Europe

Deliberately targeting civilians is different to killing them in the “fog of war”, in the confusion of battle, when a civilian reaching for their mobile phone could be mistakenly thought to be drawing a gun. In Ukraine, Khan said the court would also consider “whether civilian objects [were] being used to launch attacks that made them legitimate targets. But even then, it’s no license to use cluster bombs or use disproportionate attacks in concentrated civilian areas.”

International law expert at the ANU Professor Donald Rothwell notes that most war crimes are prosecuted after the fact. A live investigation, such as Khan is now conducting on the ground, is more difficult. “The court will have to proceed with caution”, Rothwell says. “Civilians, for example, cannot be combatants [until] they pick up a rifle and start fighting, then they may lose their immunity.” But the court could potentially intervene in war crimes as they are unfolding. “Say if a Russian military commander falls into the hands of the Ukrainians, and they pass them onto the ICC”, Rothwell says. Still, what difference successful prosecutions would make on the war’s progress is unclear.

Who can be prosecuted?

Anyone can be held accountable – from the lowest footsoldier to the country’s leader. The ICC tends to focus on leaders and commanders because resources are limited, O’Brien says. In the case of war crimes allegedly committed by Australian soldiers in Afghanistan, decisions under the spotlight relate to individual soldiers, says Rothwell. But in Ukraine, the focus is likely to be on Russian generals and Vladimir Putin.

It can be hard to prove direct responsibility higher up the chain of command, but leaders have been convicted before, including Liberia’s Charles Taylor for sponsoring atrocities in neighbouring Sierra Leone. Former Yugoslav leader Slobodan Milosevic was also put on trial by a UN tribunal but died before a verdict. (His Bosnian Serb ally Radovan Karadzic and the Bosnian Serb military leader, Ratko Mladic, are both serving life sentences.)

Will Putin ever be tried for war crimes?

If the court finds sufficient evidence to try Russia’s President, it could issue an arrest warrant. The court has no police powers and countries who do not recognise it such as China, Russia and the US would have no obligation to hand over Putin. The court does not try people in absentia except in exceptional circumstances, says Rothwell. “But it’s a long game. If there’s a change of regime in Russia, if Putin is forced out or steps down, who knows what pressure a new leader may come under to hand him over.”

O’Brien says international examples suggest that 69-year-old Putin’s position may not be so secure. Former Sudan president Omar al-Bashir was accused of war crimes, crimes against humanity and genocide by the ICC in 2008 but remained in power until 2019, when a coup brought him down. After being jailed for corruption in Sudan, he is expected to be handed over to the ICC for trial.

What about a crime of aggression?

Meanwhile, a growing chorus of experts, led by former UK prime minister Gordon Brown, are calling for a separate tribunal, modelled on the Nuremberg trials, to go after Putin for the crime of aggression – invading a sovereign nation – which the ICC cannot prosecute without special leave from the UN Security Council (where Russia holds veto power). It would take enormous political will to launch such a tribunal, Rothwell says. “But if the US put diplomatic support behind this, it could build momentum.”

On the ground in Ukraine for the ICC, meanwhile, Khan is hopeful that international justice will prevail. “We’ve seen time and time again, from Nuremberg onwards, the truth will out, and that gives me confidence,” he said.

“This is an opportunity to mobilise the law and send the law into battle, to protect and to deter, and to insist on accountability. Because if we don’t do this, we’re going to keep on having the sweet nothing’s of never again, of wringing our hands. And knowing what is coming tomorrow because we saw it yesterday.”