As the owner of a small family-run hotel in Kuta as well, he also knows just how much the Indonesian island needs Australians right now. 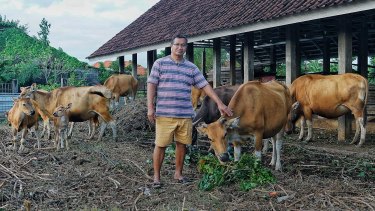 Made Purba Wilantara tends to his cows in Kuta.Credit:Amilia Rosa

“I am fully aware of the Australian fear as it involves a huge loss for their livestock industry,” he said. “But Bali is only starting to breathe again. We are slowly recovering [from COVID-19] so we really can’t afford it if they ban flights from Indonesia.

“We need Australian tourists more than ever.”

The Australian government has resisted calls to shut the border with Indonesia to prevent the spread of the dreaded virus. Instead, it announced on Friday it would further enhance biosecurity measures at its own end.

However, as Indonesia struggles to get a handle on its first foot and mouth outbreak in more than three decades, there remains great concern about it spreading into Australia from Bali in particular.

Only a tiny percentage of Indonesia’s 411,435 recorded foot and mouth cases have been in Bali, according to government data. Officially, there have been only 526 infections on the island, all in cows, with 204 remaining active this week, mainly in the northern Buleleng regency, a three-hour drive from Denpasar.

However, the neighbouring provinces – East Java and West Nusa Tenggara, which include tourist favourites Lombok and the Gili Islands – have been inundated with foot and mouth, as has much of the archipelago.

And as Australians have returned to the Indonesian getaway in increasing numbers – there were 128,421 arrivals from Australia to Denpasar in June alone – the worry is that a tourist could inadvertently take the disease home on their shoes or other items such as animal products, dealing a potential $80 billion blow to the economy.

In Bali, as with the rest of Indonesia, authorities are aiming to stem the tide with a vaccination rollout rather than the mass culling that the United Kingdom undertook in 2001, where 6.5 million cows, sheep and pigs were slaughtered to combat a devastating outbreak there. 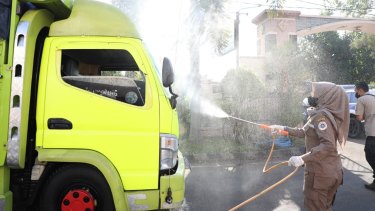 A livestock truck being sprayed with disinfectant at Lembar port, West Lombok, in the province directly east of Bali.

The provincial government reacted to the detection of foot and mouth on the island on July 1 by closing animal markets temporarily and restricting the transportation of cattle and other livestock between local government regencies. No animals or products susceptible to the disease from other provinces were being allowed into Bali either because of its status as this year’s G20 host, according to Professor Wiku Adisasmito, the spokesman for Indonesia’s newly formed foot and mouth taskforce.

But amid a shortage of vaccines – and personnel to administer them to Indonesia’s 18 million cattle and other livestock –Australia’s northern neighbour faces a momentous challenge in getting the disease under control.

“The Indonesian and Bali government understand the need to revive tourism. They will do their best to try to tackle the outbreak but it won’t be easy,” said Wilantara, the hobby farmer and hotel owner in Kuta, whose 10 cattle were vaccinated soon after news broke that the virus had made it to Bali.

“In the culture here, how people in rural Bali keep cows next to their homes, it would be impossible to disinfect or keep their [farming] gear separate from their daily activities. It is simply not practical. 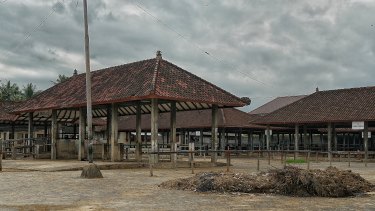 Beringkit livestock market, the largest in Bali, has been closed during the foot and mouth outbreak.Credit:Amilia Rosa

The bid to eradicate the disease in Bali has also been complicated by issues over the compensation being offered to farmers for slaughtering infected animals.

Indonesia is undertaking “conditional slaughtering” rather than the UK approach because, like most developing countries, it is not in a position to compensate owners for their herds being wiped out. It means that infected animals are destroyed if there are only a few with foot and mouth in a particular location while others receive medication. As of Friday, 4649 have been put down across the country.

Indonesia announced that farmers would be paid 10 million rupiah ($962) for each head of cattle slaughtered, but in Bali, farmers have reportedly held off having animals killed until they are sure they will get the money. 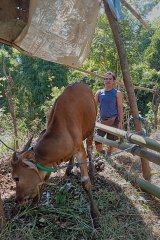 Northern Bali farmer Kadek Ardika with the infected cow he is trying to have slaughtered.

In Gerokgak, in northern Bali, livestock owner Kadek Ardika believed his 10 cattle were the first in his area to become infected, he suspected, from a young cow he bought from Celukan Bawang, where the main port in northern Bali is located.

“All 10 got sick and they have all recovered but one of them,” he said. “It’s about eight months old now and its neck is not healing, it’s crooked. It was scheduled to be slaughtered today but when the men came they said it was too young and refused to do it.

“It’s alive, it’s eating and drinking, but I am still trying to get it slaughtered, that way I can get some compensation for it. I heard the compensation may be paid in October. I’m not sure if it’s true or not, but they said we will get it this year.”

In the same village, I Putu Wibawa operates a farming group with 20 members. They sold most of the few dozen cattle they owned to buyers in Jakarta in late June when Bali was still free of foot and mouth. 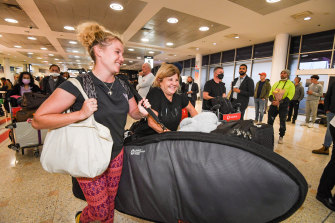 Passengers arriving from Denpasar, in Bali on Thursday. Australia is worried a major outbreak of foot and mouth disease in Indonesia could spread here.Credit:Peter Rae

The group’s remaining two cows are healthy but “with no help from the government”, he said.

“We bought the medicine [to treat foot and mouth] ourselves. We disinfected our cows with our own money,” he said. “They knew there was an outbreak, they could have anticipated it and helped us with vaccines, medicine and disinfectants. If my cows were sick I would just take them to the slaughterhouse myself and try my luck there.”

As farmers seek financial relief, butchers in northern Bali were called in for a meeting with government representatives at a slaughterhouse this week and told to negotiate with cattle owners on prices for the meat from sick animals.

Meat from cattle with foot and mouth —which is safe for humans to eat – is still permitted to be sold and processed on the island as long as it is cooked at a temperature of at least 70 degrees. The head, feet, internal organs and skin are not to be sold and must be buried or boiled for at least 30 minutes, according to a local government directive. Containers carrying the meat must also be soaked in detergent, bleach or vinegar.

“The highest price is 8 million rupiah but it is up to us to negotiate the prices according to the cow’s condition and size,” said Haji Amir Mahfud, a butcher from Buleleng who was at the meeting.

There is at least one theory as to how foot and mouth made its way into Indonesia.

Local news outlet Kompas reported last week that the illegal purchase of 14 goats from Thailand by a trader in Wonosobo, Central Java, in February was believed to be the source of the virus’ re-entry. The goats were transferred by boats from Thailand, where foot and mouth is endemic, to the Indonesian province of Aceh and onto Sumatra and Java, according to the report.

That has not been confirmed by the government of President Joko Widodo, whose Agriculture Ministry has said it is still investigating the origin of the outbreak. 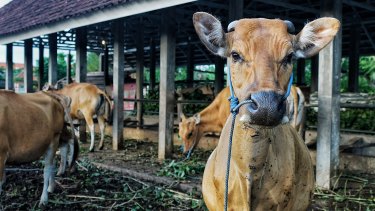 For now, it has its hands very full trying to stamp it out.

Now the chief of the foot and mouth response team, he met with Agriculture Minister Murray Watt in Jakarta last week and has assured Australia “it should not be worried because Indonesia is seriously handling the disease”.

He told The Sydney Morning Herald and The Age Indonesia hoped to reduce infections significantly over the next six months and had introduced biosecurity rules including the spraying of carpet at the entrances of airports with disinfectant and of vehicles travelling in and out of farms.

At Denpasar’s Ngurah Rai Airport, however, there has been no change to protocols, according to general manager Hendy Heryudhitiawan.

“Until now, we have not or have not received additional protocol requests for preventing the spread of FMD,” he said.

Professor Peter Windsor, an expert in foot and mouth control at the University of Sydney who worked closely with the Philippines on its fight against the disease, is just back from Java and says a lack of public awareness in Indonesia is concerning.

“There are more posters about foot and mouth disease arriving in Sydney, at the airport, than there are in all of Indonesia at the moment,” he said.

He believes the scale of the problem in Indonesia is immense, and it could go on for years.

“Resources at the ground level are inadequate because they aren’t used to dealing with the level of biosecurity that’s required to stop the disease spreading,” he said.

“From what I’ve gathered from talking to many people, they’re overwhelmed. They’re not on top of it. They’re actually a long way from it.”

– with Mike Foley and Karuni Rompies

Cut through the noise of federal politics with news, views and expert analysis from Jacqueline Maley. Subscribers can sign up to our weekly Inside Politics newsletter here.