A war between Sydney society darlings and former besties Ellie Aitken and Hollie Nasser has turned nuclear amid a dramatic boil over on social media and into a real-life confrontation.

Sydney’s investment community and eastern suburbs social set has been rocked by revelations that Aitken’s husband of 19 years, Charlie Aitken, had left her and for her lookalike ex-bestie Nasser.

And just when we thought things couldn’t get messier, things did. 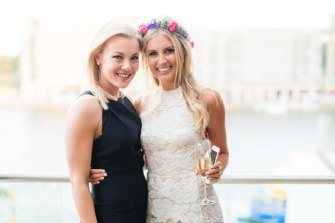 The fireworks then spilled into a spectacular confrontation outside Aitken’s North Bondi home.

A neighbour told CBD Nasser and her new beau – Ellie’s previously longstanding husband Charlie – arrived at the home on Sunday morning where a heated conversation broke out between Ellie and Hollie over the fence. Charlie then went inside and was spotted exiting clutching a number of business shirts.

An hour earlier, Ellie, who co-founded Aitken Investment Management with Charlie about a decade ago, hit Instagram to share a screenshot of a heated text conversation.

“Stop lying and bullying me @hollie.nasser. Enough,” Aitken wrote underneath the explosive exchange which kicked off with a message from Hollie accusing her former friend of “playing the victim”.

“Ellie there’s no point in us talking any more … I can’t believe … you are out there playing the victim and saying I ruined your perfect marriage,” Hollie wrote to Aitken.

“Charlie was not at my house last night and I’ve got mum staying here. I’ve had photographers here since Friday and still here now surrounding my house … [Charlie] dropped me outside my house on Friday and that’s it, I know he’s staying at [a serviced apartment].”

In response, Aitken told Nasser to stop “trying to deflect” and insisted she knew her husband had been at Nasser’s home.

“Darling I was watching him there with the white plantation shutters behind which we photographed on FaceTime and he told me was there having pizza,” Aitken said. “And no I didn’t have a two-year affair, don’t try to deflect.”

Before all this, the Aitkens and Hollie and wealthy investor husband Chris Nasser – a shareholder and former director of Aitken Investment Management – had been an inseparable quartet in Sydney’s eastern suburbs social set.

Since news of the affair broke, Chris Nasser has resigned as a director of the funds manager and appointed his brother Damien Nasser to watch over the family’s shareholding.

On Thursday, the Nasser family also withdrew an investment of about $7.5 million from Aitken’s global high conviction fund. Like we said: we thought this mess couldn’t get messier.