The UK has announced 778 more deaths from the coronavirus today, taking the UK’s total to 12,107 after three weeks of nationwide lockdown.

NHS England confirmed 744 more patients have died in its hospitals and a total of 34 fatalities were announced across Wales, Scotland and Northern Ireland.

The increase from 717 deaths recorded yesterday is small – 8.5 per cent – but comes at the end of a four-day bank holiday weekend, meaning deaths that happened after Wednesday last week may be underreported.

Government scientists have cautioned against pinning too much hope to the numbers of people dying because they date back up to two weeks.

A more promising development is the apparent stabilising of the numbers of people being diagnosed with the virus – 5,252 more people were diagnosed in the past 24 hours, taking the total number of positive tests so far to 93,873.

This number appears to be levelling off and has failed to rise above a peak of 5,903 on April 5.

Today’s statistics come amid a row over care homes’ role in the ongoing crisis.

Elderly people account for the vast majority of COVID-19 deaths but authorities are not routinely testing the 400,000 Britons who live in care homes and records only publish homes’ death statistics in once-weekly updates which are 10 days out of date. 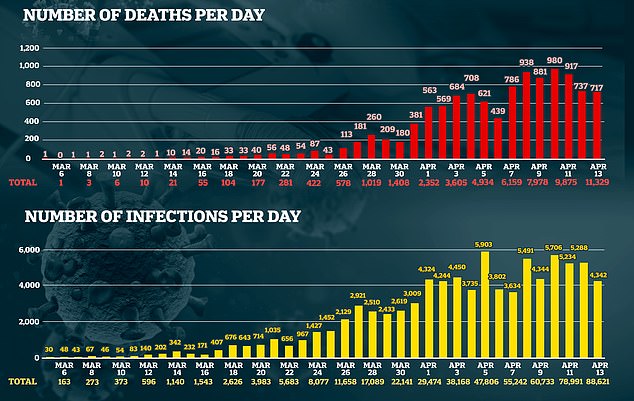 After a lapse behind the Midlands yesterday, London has returned to its position as the centre of the UK’s outbreak, accounting for 206 of the deaths announced today.

The Department of Health has officially recorded 34 more deaths for Scotland, Wales and Northern Ireland, but the devolved nations independently recorded more.

Because the four governments record their data at different times these statistics do not line up – some of those that happen outside of England will be recorded by Whitehall tomorrow.