President Trump told a female reporter Sunday to ‘keep your voice down’ as she asked him about what he did to warn the American people in February that the coronavirus was being spread like ‘wildfire.’

CBS News’ Weijia Jiang pointed to comments Trump had made Thursday in which he said he was ‘angry’ because information about the coronavirus ‘should have been told to us’ earlier.

‘Many Americans are saying the exact same thing about you, that you should have warned them the virus was spreading like wildfire through the month of February, instead of holding rallies with thousands of people,’ Jiang said. ‘Why did you wait so long to warn them?’

CBS News’ Weijia Jiang pointed to the president’s comments – that he was ‘angry’ that the U.S. wasn’t informed sooner about coronavirus – when asking why he didn’t warn the American people sooner about the pandemic 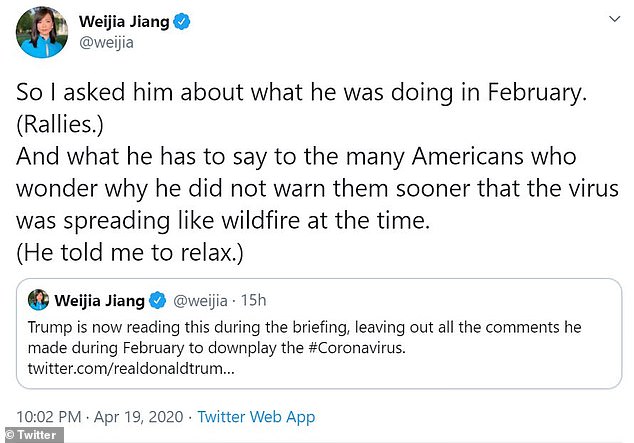 Jiang detailed the encounter on Twitter Sunday, commenting that the president had told her to ‘relax’

Trump interrupted Jiang to ask her who worked for. And then pointed to his late January ban of flights coming in from China.

‘Chinese nationals … by the way, not Americans who were also coming in from China,’ Jiang corrected the president.

To this he responded to the reporter by saying, ‘Nice and easy.’

‘We cut it off. People were amazed. These gentlemen, everybody was amazed that I did it. We had 21 people in the room, everybody was against it but me. Dr. Fauci said, had I not done that perhaps tens of thousands and maybe  much more than that would have died,’ the president continued. ‘I was very early. Very, very early.’

Trump then pointed to a tweet that he had sent out earlier Sunday quoting Fox News Channels Bret Baier who wrote that at the February 19 Democratic debate in Las Vegas the coronavirus didn’t come up once.

‘It wasn’t even mentioned – the Democrats,’ Trump said.

‘And you’re the president, sir. And you didn’t warn people that it was spreading so quickly,’ Jiang shot back.  ‘And, by the way, when you issued the ban, the virus was already here.’

Trump then asked the CBS News reporter if she knew how many cases were in the United States when he implemented the China ban. ‘Do you know the number?’ he asked. ‘Tell me. ‘

‘But did you know that it was going to spread and become a pandemic?’ Jiang answered instead.

The president said she needed to do her research.

‘I did my research,’ Jiang said. ‘On the 23rd of March you said you knew this was going to be a pandemic, well before the [World Health Organization.] So did you know it was going to spread?’

Trump said that he ‘did know it.’

When Jiang took that to mean that he didn’t think it was going to spread, Trump laid into her.

Trump continued to ask Jiang how many cases were in the United States and how may people died.

‘That’s a fair point,’ she offered.

The president again pointed out that nobody had died in the United States by that point.

‘And yet I closed up the country and I believe there were no deaths – zero deaths – at the time I closed the country. Nobody was there. And you should say “thank you very much” for good judgment,’ he told Jiang, before moving on.