Washington: Hope Hicks, one of President Donald Trump's closest aides, has tested positive for coronavirus infection, according to people familiar with the matter.

There was no indication that the President has contracted the virus, the people said. Hicks travelled with Trump aboard Air Force One to and from the presidential debate on Tuesday. 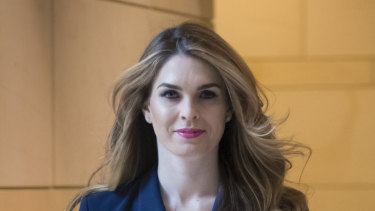 The people asked not to be identified because Hicks's infection has not been publicly announced. Messages left for Hicks were not immediately returned.

Hicks is the latest person in Trump's orbit to contract the virus, which has infected more than 7.2 million Americans and killed more than 200,000. Other senior staff have contracted COVID-19 and recovered including National Security Adviser Robert O'Brien, but few spend as much time with the president as Hicks, whose service dates to his 2016 campaign.

Some people close to Hicks were told that she is experiencing symptoms of the disease.

The development is likely to inflame criticism of the Trump administration's response to the coronavirus pandemic, as well as the president's disregard for public health measures to combat it.

Trump seldom wears a mask and has belittled his re-election challenger, Joe Biden, for routinely covering his face. The president has resumed holding large campaign rallies at which thousands of his supporters gather, shoulder to shoulder, few in masks.

Most of the events are held outdoors at airports but two recent events in Arizona and Nevada were indoors, a setting that public health experts raises the risk of virus transmission.

Hicks travelled with Trump to his debate with Biden on Tuesday and to a Minnesota rally on Wednesday. Trump's entourage entered the debate hall without face coverings, or removed them as they sat down, and refused an offer of masks from a doctor at the Cleveland Clinic, which was co-hosting the event.

When they returned to Washington on Tuesday, Stephen Miller and Hicks were seen sharing an umbrella as they exited Air Force One in the rain. Miller's wife, Katie Miller — Vice President Mike Pence's press secretary — recovered from COVID-19 earlier this year.

Our weekly newsletter will deliver expert analysis of the race to the White House from our US correspondent Matthew Knott. Coming soon. Sign up now for the Herald‘s newsletter here, The Age‘s here, Brisbane Times‘ here and WAtoday‘s here.