Washington: The Trump administration expects between 100,000 and 240,000 Americans will die after contracting the coronavirus if social distancing is maintained, a figure the US President said was "very sobering". 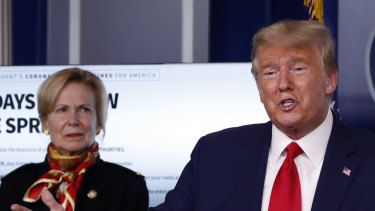 Hundreds of thousands could die. US President Donald Trump speaks about the coronavirus.Credit:AP

If 240,000 Americans die from the virus, it would be four times as many American casualties as the Vietnam War and 80 times the number of people who died in the September 11 attacks.

More than 700 deaths from the virus were recorded in a single day on Tuesday (Wednesday) in the US, topping the previous peak reached the day before.

"We are going to go through a very tough two weeks," US President Donald Trump said when presenting the projections at the White House.

"This is going to be a very, very painful two weeks."

Trump said the US was undergoing a "great national trial unlike any we have ever faced" and that it would require the “full absolute measure of our collective strength, love and devotion" to minimise the number of infections. 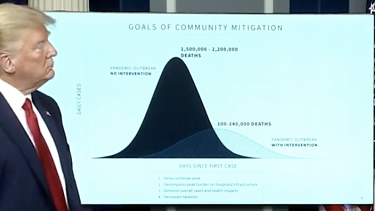 President Trump stands before a screen showing the projected curve of infections in the US. Up to 240,000 Americans could die.

"It’s a matter of life and death, frankly," he said.