Point blank madness: Shockingly, there are more guns in the U.S. than people. And as a new book illustrates, some firearms enthusiasts have entire arsenals, writes TOM LEONARD

At the same time, Americans are buying guns in record numbers, while Texas lawmakers this week became the latest to vote to allow people to carry handguns without either a licence, background check or any training.

The British response is traditionally to sigh in weary bewilderment and just be glad that such a terrifying arms race doesn’t exist in the UK. And yet there’s reason to be alarmed.

British police report that a growing number of firearms bought legally in U.S. gun shops are finding their way illegally to the UK, where they are being used by criminals who remove their serial numbers to make tracing them far harder. 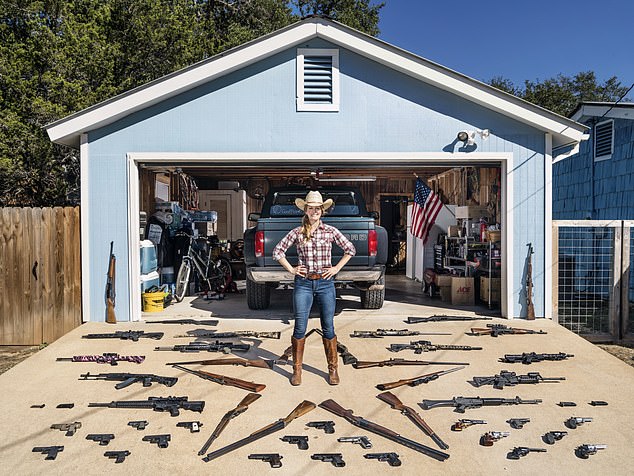 ‘A Good Patriot’: Originally from California, Katie moved to Texas because of crackdowns on gun ownership in her native state. The 41-year-old says: ‘Me and my husband decided to move here mainly because the government of California was becoming a bit oppressive.’ Katie runs a business called The Good Patriot, producing home decor items focused on freedom, the U.S. constitution and the Second Amendment, which enshrines in law the right of Americans to bear arms 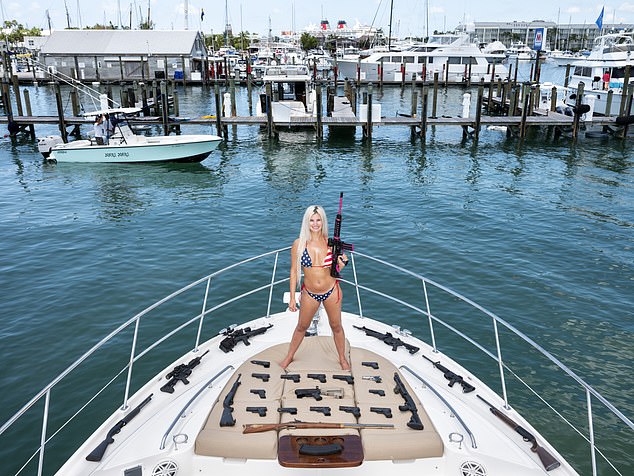 ‘I can be any man’s equal’: Instagram influencer Brickell Clark has nearly 20,000 followers at @ americangunchic and likes guns for two reasons: they’re chic and great levellers. The 26-year-old from Key West, Florida, says: ‘While everyone has a right to own guns, for a woman it’s also a way to be any man’s equal’ 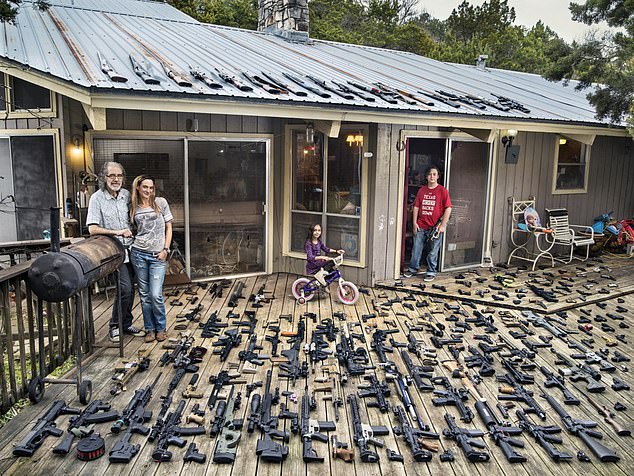 The mum with 170 firearms: Joel and Lynne live with their children Paige and Joshua in Austin, Texas. Lynne is the gun fan, owning around 170. Aged just 11, Joshua walks around the house with a handgun he built himself from a catalogue

Between 2017 and 2020 nearly 900 illegal weapons seized in Britain originated in the U.S., and officials fear that gangs can increasingly turn from knives to guns.

Last weekend, Black Lives Matter activist Sasha Johnson was shot in the head at a London party. She was treated for her critical injuries in hospital.

Back in the U.S., the most often quoted firearms fact is that it’s the only country in the world with more guns than people — around 12 guns to every ten people, or 390 million in a population of about 331 million (although if unregistered guns are also included, it’s estimated the total could be almost double that). 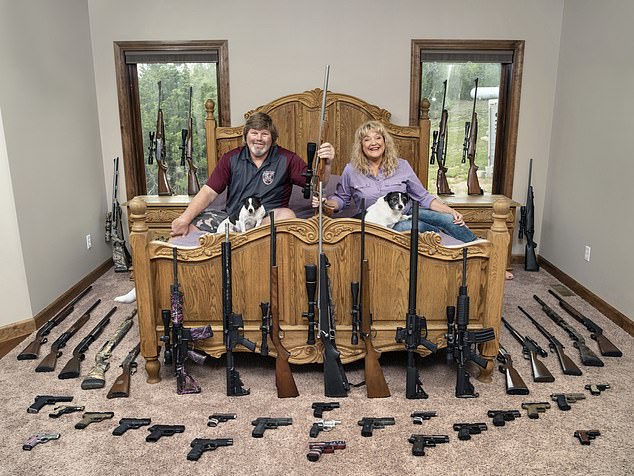 ‘They let us defend our family’: Floyd and Lesia McMillin’s home is a showcase of hunting trophies, featuring stuffed deer, squirrels , ducks and geese. In the bedroom are the guns — only one or two ready to be fired at a moment’s notice ‘in the defence of the family’. The collection of the couple, both 49, who own a gun shop in Topeka, Kansas, consists of 65 pieces 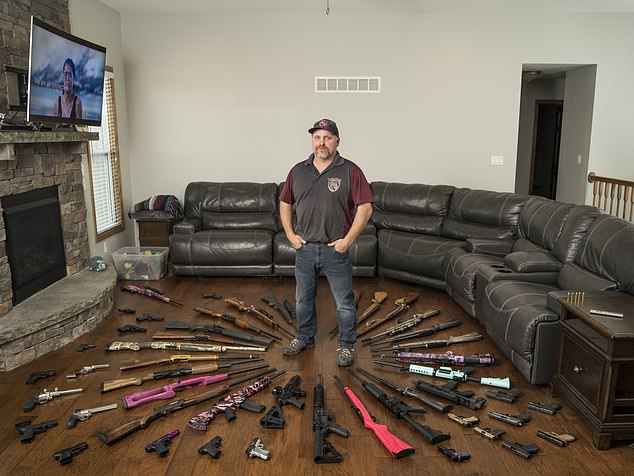 ‘Dad gave me a pistol aged 10’: Robert Nordyke’s dreams came true when he opened a gun shop and shooting range in 2015. The 43-year-old, from Topeka, Kansas, has about 50 guns. He got his first pistol aged ten from his father. ‘I can recall those days we spent in the fields trying to hit tin cans. They were so much fun.’ Now, his range houses a ‘simulation room’, where, thanks to virtual reality, players face extreme situations using real or fake firearms. He teaches customers how to shoot and rules about how to be safe

However, those astonishing figures are deceptive — more than three-quarters of adult Americans say they don’t own a gun, while a few people drastically drive up the total by owning vast arsenals, as they are legally entitled to do.

Fifty of those one-man, or frequently one-woman, armies are profiled in a shocking new book, The Ameriguns, in which photographer Gabriele Galimberti asked members of Facebook gun enthusiast groups to pose with their weaponry.

They include clergymen and jewellery makers, as well as more predictable gun enthusiasts such as ex-servicemen and police. 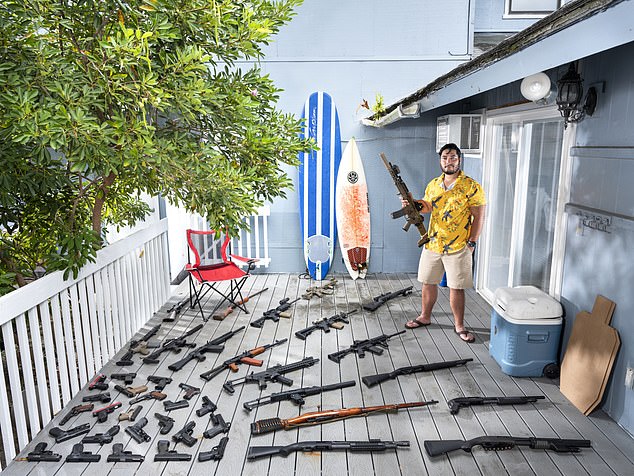 ‘I collect military weapons’: From the age of eight, David Kikukawa nursed a desire to own firearms. He bought his first revolver just after finishing high school, not long before enlisting in the army for four years. Since returning to civilian life, the 25-year-old from Hawaii collects guns to protect himself. ‘I have military-type guns. In the beginning I liked having them for practice, but today I think they’re excellent for self-defence’ 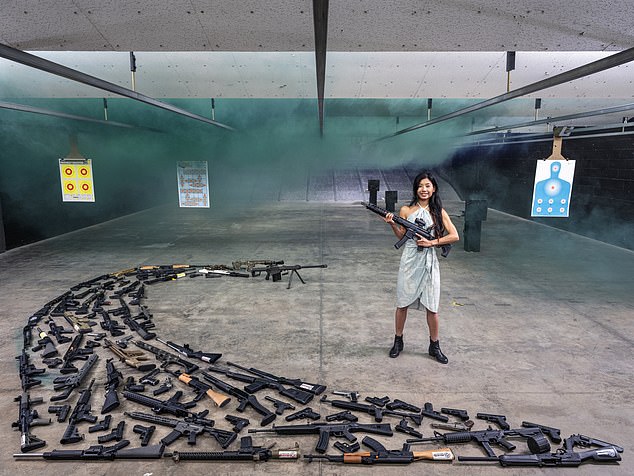 ‘I’ll never tire of new guns’: Kitija Shiroma, 29 — Mae to her friends — has the biggest shooting range in Hawaii. She owns it with her stepfather, a former military man. It was he who instilled her passion for firearms. She says: ‘I used to watch Hollywood movies and my father would take me hunting up in the mountains.’ She has one of the largest collection of firearms on the island, consisting largely of antiques. ‘I could never get tired of having new guns,’ adds Kitija, from Honolulu 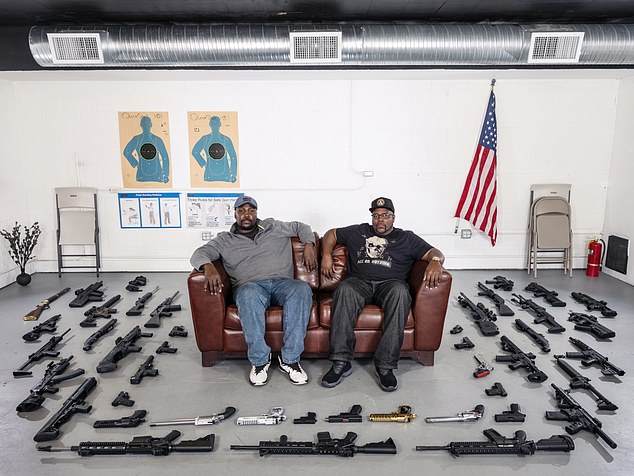 ‘Shooting feels so powerful’: Five years ago, truck driver Collin Singletom and factory worker James Prince met at a shooting range in Atlanta, Georgia. ‘I started liking guns when I was really young. The first time I shot a gun, I was 16 years old. I remember feeling so powerful. It was a great feeling,’ says Collin, 45. Forty-one-year-old James’s father put a revolver into his son’s hand at the age of six and taught him how to use it. He now has 18 firearms in his collection, but is outgunned by Collin with 43

The photographer found a family in Texas that owns more than 200 firearms.

Former FedEx delivery driver Stephen Wagner, 66, from Pennsylvania, has 70, and still fondly remembers the moment when he was eight and his grandfather put a revolver in his hand, explaining how it worked.

‘We Americans are very lucky,’ he told Galimberti. ‘It’s wonderful to have a bond of this sort with our country.’

The Ameriguns by Gabriele Galimberti, published by Dewi Lewis and Skinnerboox at £35.