Taipei: China has announced it has created the world’s fastest wind tunnel, giving it a significant advantage in the race to create hypersonic weapons.

The JF-22 will be the world’s most advanced hypervelocity wind tunnel when it is fully built in 2022, state media reported on Monday.

The tunnel will be capable of simulating flying conditions at about 30 times the speed of sound. China says the ultra-high-speed tunnel “is the cradle for a new generation” of hypersonic and aerospace aircraft. 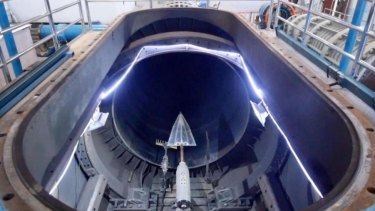 It could also be used to develop hypersonic missile technology.

Hypersonic weapons travel at five times the speed of sound or more and can beat conventional missile defences.

China has been building the JF-22 hypervelocity wind tunnel in Huairou, an industrial district of Beijing, since 2018. Wind tunnels are large tubes that move air around stationary objects to simulate flying, allowing researchers to learn more about how the object will fly.

Countries including China, the US, Russia and soon Australia have been developing hypersonic flight technology and missiles, which have the advantages of fast flight and increased manoeuvrability that can make them very difficult to counter.

At a military parade in 2019, Beijing showed off its DF-17, a hypersonic missile believed capable of breaching all existing anti-missile shields deployed by the US and its allies.

Much like its space programme, Beijing views its military developments as a matter of national pride. Its massive military research and development programme has boosted its own weapons technology to the forefront along with that of the US and Russia.

Russia, like China, is modernising its military amid tensions with the West. On Monday, President Vladimir Putin launched the construction of two nuclear submarines armed with intercontinental ballistic missiles together with two diesel-powered submarines and two corvettes.

“We will continue to boost the potential of the Russian navy, develop its bases and infrastructure, arm it with state-of-the-art weapons,” Putin said.

China already developed another wind tunnel, the JF-12, in 2012 that can simulate speeds of five to nine times the speed of sound.

Han Guilai, a researcher at the Chinese Academy of Sciences, said that the two tunnels would put China “about 20 to 30 years ahead” of the West, according to the South China Morning Post.

China’s wind tunnels are reported to use chemical explosions to produce fast air flow, rather than mechanical compressors used in other countries.