Vasyl Myroshnychenko, Ukraine’s ambassador to Australia, is 15 minutes late for our lunch because he has spent the morning in Parliament House doing television interviews. It was Tuesday this week when Russia bombed a shopping centre in a small town, killing at least 18 people, and the leaders of the G7 met in Madrid to talk about their response.

Myroshnychenko says it is depressing that he has become “famous” in Australia because of the tragedy of the war in Ukraine. But as I will learn, he is used to this sort of media exposure and even thrives on it. He is a rather unusual diplomat who embodies the generational difference in world outlook between Ukraine and Vladimir Putin’s Russia. 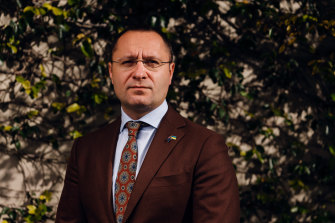 Vasyl Myroshnychenko is an unusual diplomat, with a background in the art of public relations rather than diplomacy.Credit:James Brickwood

While the Kremlin is dominated by grey apparatchiks stuck in a Soviet time warp, Myroshnychenko, just 41, is a techy, media-savvy Millennial, somewhat like Ukraine’s comedian-President Volodymyr Zelensky, who would be a breath of fresh air even in Australian diplomacy.

I ask him to tell me a story I had heard about his role in a Eurovision Song Contest that changed the course of Ukrainian history.

He was working for a public relations company in 2004 when he and his boss came up with a cheeky plan to win the pan-European song contest as a way of promoting Ukraine’s national brand.

They noticed that the voting system had just changed: whereas previously juries chose the winner, from that year the contest was decided by a popular phone vote. Myroshnychenko convinced the Ukrainian entrant, pop singer Ruslana, to tour 14 small countries in Europe before the final to build support. Sure enough, her song Wild Dances won the competition, thanks to votes from places like Iceland and Turkey where she had toured.

A few months later, however, Eurovision came to play an important role in the so-called “Orange Revolution”, which thwarted Putin’s first attempt to take over Ukraine. Putin’s preferred candidate, Viktor Yanukovych, tried to rig the 2004 Ukrainian presidential election, but tens of thousands of Ukrainians took to the streets. Ruslana gave speeches and Wild Dances became the anthem for the protests. “The Russians called Ruslana ‘the Orange witch on a flying broom’,” says Myroshnychenko.

Fresh elections were called and the anti-Putin candidate, Viktor Yushchenko, won. When he hosted the 2005 Eurovision in Kyiv, Myroshnychenko says it was a “wow” moment in Ukraine’s fight for greater independence.

We are dining at Courgette, a hatted French restaurant in central Canberra, which on this weekday is virtually empty. We order just two courses because the ambassador is flying to Ukraine that night and is short on time. I speculate that he wants to be back home in case Prime Minister Anthony Albanese visits. He says that given recent missile attacks he still doesn’t know what Albanese will do. Myroshnychenko orders a Coke because he says he needs a sugar hit. 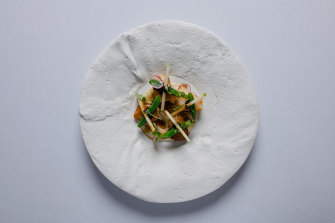 We had originally intended to meet in Sydney but Myroshnychenko’s trip back to Ukraine changed our plans. He had recommended a pop-up Ukrainian restaurant called Nasha Kazka (Our Fantasy) in Bondi. I mentioned to him that I had googled it and it used to be called Nasha Skazka, which is the same thing in Russian. We speculate that the name was changed from Russian to Ukrainian because of the bad publicity related to the war, but it would not affect the menu because Ukrainian food is very similar to Russian. “They stole the dishes from us, like they steal everything,” he jokes.

I ask him about his attitude to Russian culture, and his answer illustrates the history of abusive intimacy that has intertwined Ukraine and its large eastern neighbour over the centuries when Ukraine was part of the Russian Empire and then the Soviet Union.

Myroshnychenko’s grandparents on one side suffered during the terror-famine known as the Holodomor in 1932-33, when Soviet dictator Joseph Stalin tried to wipe out the Ukrainian nationalist movement, killing as many as 5 million Ukrainians, although the precise death toll is debated.

Yet the same grandfather, who later became a career soldier in the Soviet Army, was disappointed when the USSR collapsed and Ukraine became independent in 1991. 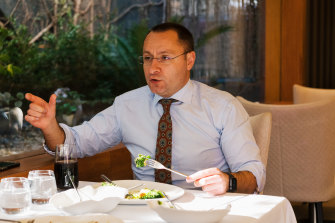 Born in Ternopil, a mid-sized city in western Ukraine, Myroshnychenko spoke Ukrainian at home but is fluent in Russian. At school he read most books in Russian because titles like Catcher in the Rye and The Adventures of Tom Sawyer had not been translated into Ukrainian. He still loves Mikhail Bulgakov, the Russian writer who grew up in Kyiv. It seems tragic that two countries which shared so much are now such bitter enemies.

The entrees arrive, but the conversation is so lively that I barely have time to taste it. Myroshnychenko talks like a machine gun. He has to pause to check a text from opposition leader Peter Dutton’s office. 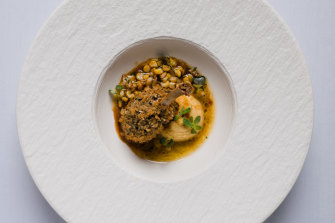 After his Eurovision triumph, Myroshnychenko continued working in “government relations” and “reputation management”, mostly for multinational companies, but he was dragged into the Ukrainian struggle again in 2013-14 during the so-called Revolution of Dignity, when Putin’s campaign against Ukraine shifted from covert operations and espionage to open violence. Months of protests filled Kyiv’s main square (“maidan” in Ukrainian) against Yanukovych, Putin’s candidate who had once again been elected president.

Eventually, after about 120 people were shot, Yanukovych fled. Outraged at this defeat, Putin invaded the Crimean Peninsula and sent troops in unmarked uniforms to support an insurrection in Ukraine’s eastern Donbas region.

Myroshnychenko’s office was around the corner from the Maidan in downtown Kyiv and because of his fluent English he became the go-to commentator for Western television crews covering the protests. He then set up an organisation in partnership with some other PR agencies called the Ukraine Crisis Media Centre, to counter Russian propaganda about Ukraine. 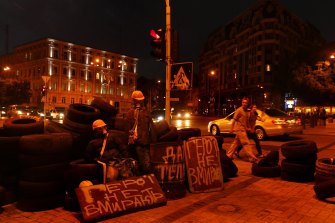 A tyre barricade near the Maidan in 2014.Credit:Kate Geraghty

When Putin starting claiming that Ukraine had been taken over by Nazis, Myroshnychenko’s group organised press conferences of Ukrainian rabbis to testify that Ukraine was not anti-Semitic.

He says the issue has come up here in Australia. Recently, he spoke at a synagogue in Caulfield in Melbourne where he was asked about the collaboration by some Ukrainian nationalists with Nazi Germany in carrying out the Holocaust from 1941 to 1945.

Myroshnychenko says there is no way anyone can justify what was done to Jews by some Ukrainian nationalists during the war. But he says Ukraine has changed, and the far right is now smaller in Ukraine than in Germany or the Netherlands. Of course, Zelensky is Jewish.

In Caulfield, he told a personal story about how he worked as a translator and guide for American Jews whose ancestors had fled from his grandparents’ home town of Volochysk in Tsarist times and were returning to Ukraine to rediscover their roots. It was a revelation to him too. “There was a very vibrant Jewish community in the town. I never knew about it because in the Soviet times you never heard about stories like that. In Soviet times Jews couldn’t practise.”

The mains arrive and Myroshnychenko pauses briefly to note that his swordfish is tender. I am impressed by his knowledge of southern sea fish. My beef is also delicious. The portions are not large, but we are bulking it up with greens and salad. 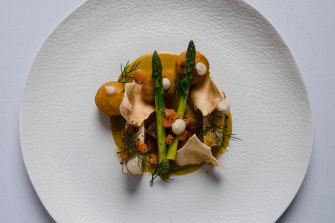 Inevitably, we talk about the war that started on February 24 and Myroshnychenko admits he wasn’t expecting the attack, despite the repeated warnings. “We stayed until the last day. I didn’t believe Putin would invade. It didn’t make sense.”

He waited until the bombings started before sending his wife and two children out of Kyiv. Two of his university friends, who had experience fighting in the first phase of the war in 2014 and been called up again, died in early battles around Kyiv. “In my class at uni we had 60 people. Two of them got killed already.”

He was only invited into the diplomatic service in March by the Zelensky government as part of a program to harness Ukraine’s private sector skills in representing Ukraine abroad.

We talk about how the war seems set to drag on. Myroshnychenko says he is worried that even if Germany and other European countries stop buying Russian gas, Putin can finance his war by selling energy to countries such as China. I wonder how much longer the Ukrainian people can accept the deaths and destruction. “You say that from your background, but we see it differently,” says Myroshnychenko. “For us we have been fighting Russians for 300 years.” 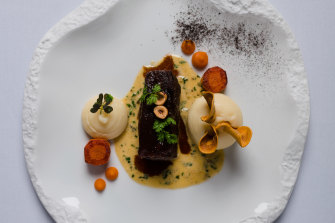 I say it seems out of place for a modern spin doctor like him, who is just as much at home in Canberra or London as Ternopil, to be so concerned about 300 years of history. He replies: “We didn’t care about history until the Russians invaded in 2014. They killed 14,000 people, and we are kind of: ‘Why do they do that?’ And you have to go back to history.” The figure he gives for the death toll is for both sides between 2014 and the start of this year.

Myroshnychenko is convinced that if the Russians win, many Ukrainians will be killed. “I am sure I am on a Russian list, and they would kill me.”

As we leave I mention I have been added to the list of Australians who have been banned from travelling to Russia because I have written some articles about the war that the Russian embassy disliked. I say I am a little annoyed because I speak Russian and would like to visit the country again. He theatrically shakes my hand and congratulates me. “You should be proud.”