Spain’s rate of growth in coronavirus cases fell to a new low for the second day running today, in the latest promising sign that the crisis could have peaked.

The 6.8 per cent increase is the smallest since the crisis began, improving further on yesterday’s record low of 7.9 per cent.

Meanwhile another 932 people have died after being infected, slightly down from yesterday’s 950, bringing Spain’s death toll from 10,003 to 10,935. 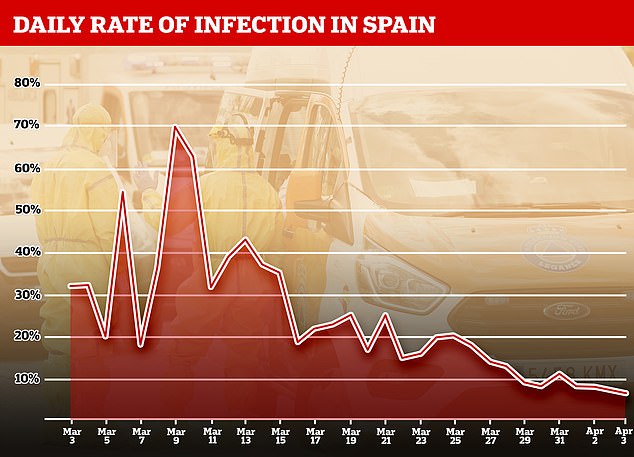 This chart shows the daily percentage increase in coronavirus cases in Spain. Today’s figure of 6.8 per cent is the lowest since the crisis began 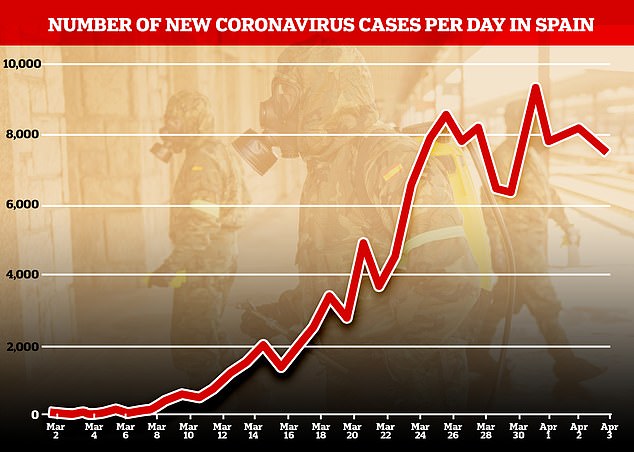 This graph shows the number of coronavirus cases which were added to Spain’s tally each day. Today’s 7,472 new cases are lower than yesterday’s jump of 8,102 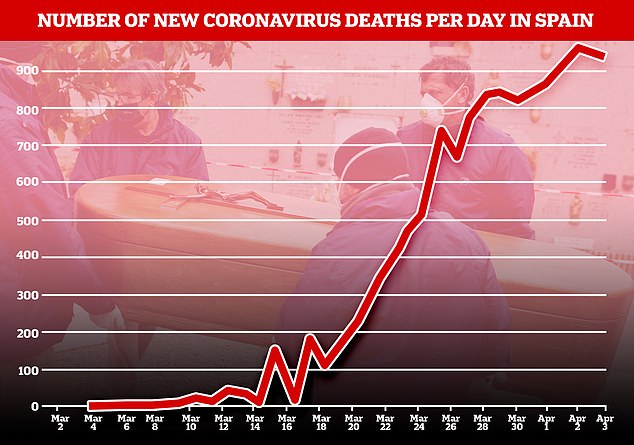 This chart shows the daily number of new deaths, which fell slightly to 932 today after reaching a new high of 950 yesterday

According to the latest figures, more than 2,000 of the latest infections were in the Madrid region and another 1,650 were in Catalonia.

Elsewhere, the Balearic Islands and Canary Islands reported around 50 new cases each in the last 24 hours.

The Spanish death toll is the second-highest in the world, behind only Italy, and has risen rapidly after the first fatality was reported only on March 3.

However, the slowing infection rate has been hailed as an encouraging sign, suggesting that lockdown measures may be working.

Cases surged by 18 per cent as recently as March 26, but the figure has been above 10 per cent only once in the last six days.

Yesterday it fell to a new low of 7.9 per cent, and today’s figure of 6.8 per cent is more promising still.

‘A glimpse of hope: the curve has stabilised. We have reached… the peak of the curve and we have started the slowdown phase.’

Spain has been in lockdown since March 14 and restrictions have since been tightened, with non-essential workers asked to stay at home from March 30. 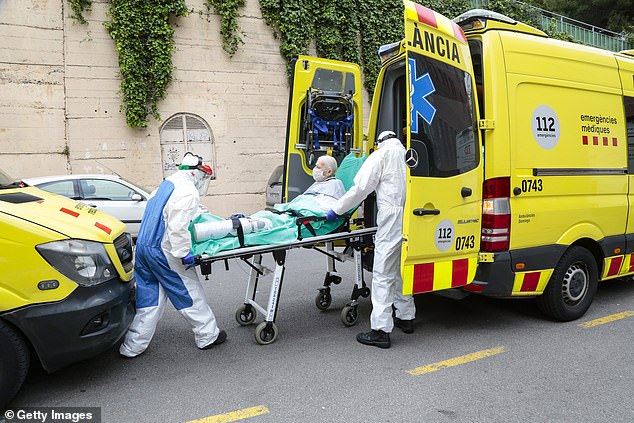 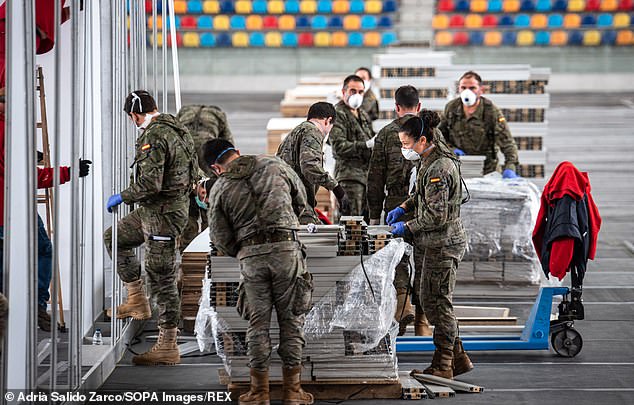 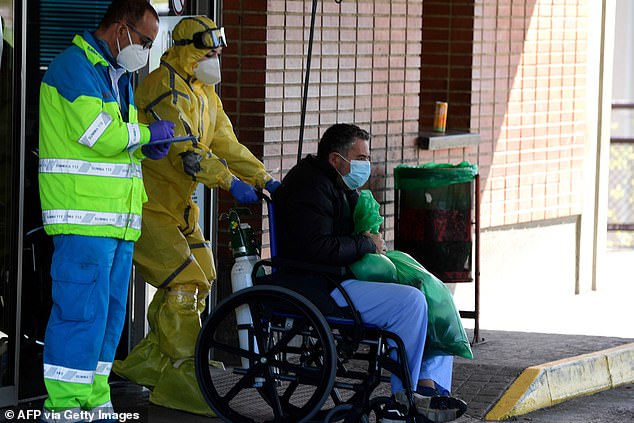 The country has shed an unprecedented 900,000 jobs since the measures started, with temporary layoffs affecting at least 620,000 other jobs.

Around 80,000 workers are off sick with coronavirus, while 170,000 more are on sick leave, isolated after coming into contact with an infected person.

Deaths in nursing homes, where older people are particularly vulnerable to the disease, have attracted particular attention in Spain.

The head of government for the Madrid region told Spanish radio that around 3,000 people had died in nursing homes in March, three times higher than normal.

The regional government says it cannot be sure how many were caused by coronavirus, because of a lack of testing equipment.

Fifty residents have died since the start of the epidemic at one nursing home in Leganes on the outskirts of Madrid, EFE news agency says.

Funeral workers in white protective gear were seen taking coffins out of the nursing home and putting them in a van.

Later, ambulances picked up various uninfected residents to take them to other homes.

A senior pharmacist in the Madrid region has asked the government to supply protective gear like after at least five pharmacists died from the virus.

About 270 pharmacists are in quarantine in the region because they have symptoms of the disease, forcing the temporary closure of dozens of pharmacies, Luis Gonzalez said during an interview with private television Telecinco. 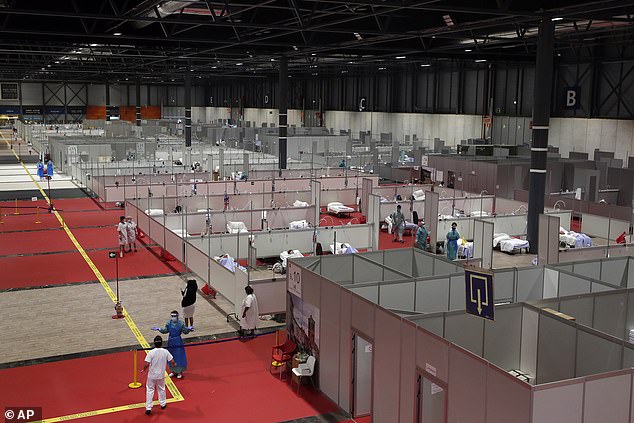 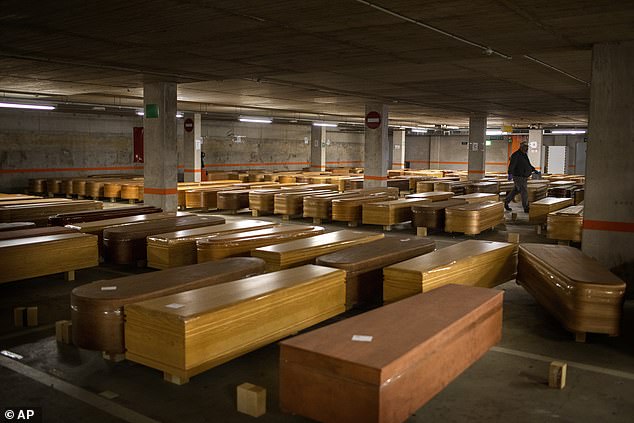 Coffins of coronavirus victims are laid out in a car park at the Collserola morgue in Barcelona yesterday, with Catalonia recording hundreds of new cases 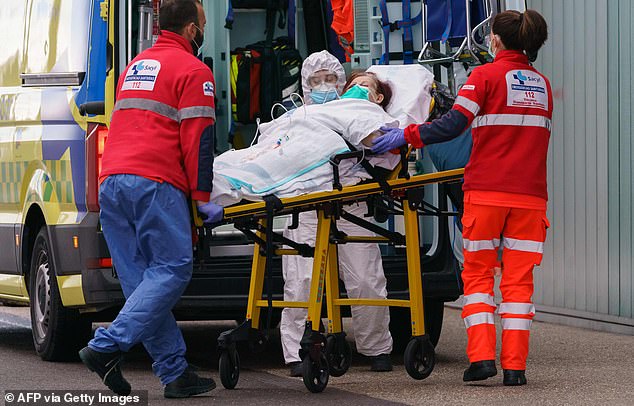 ‘All I ask is that we please be sent medical supplies as soon as possible. We are also health care workers, we are on the front lines of the fight, we are working with the public,’ he said.

‘We are not seeking subsidies, we are not asking for economic aid, we only ask for protective gear…so we can continue providing our service, so no more pharmacies close.’

In Catalonia, authorities have abandoned their initial reluctance and asked the national military to send medical teams to help tackle the coronavirus.

Like several other countries, Spain is also looking at using mobile phone data to track people’s movements and manage the lockdown.

Dubbed ‘DataCovid’, the study will be carried out by national statistics institute INE with the co-operation of the country’s main telecoms operators, it said.

The government said all the data will be scrubbed of personally identifiable information and will be completely anonymous, in line with privacy laws.