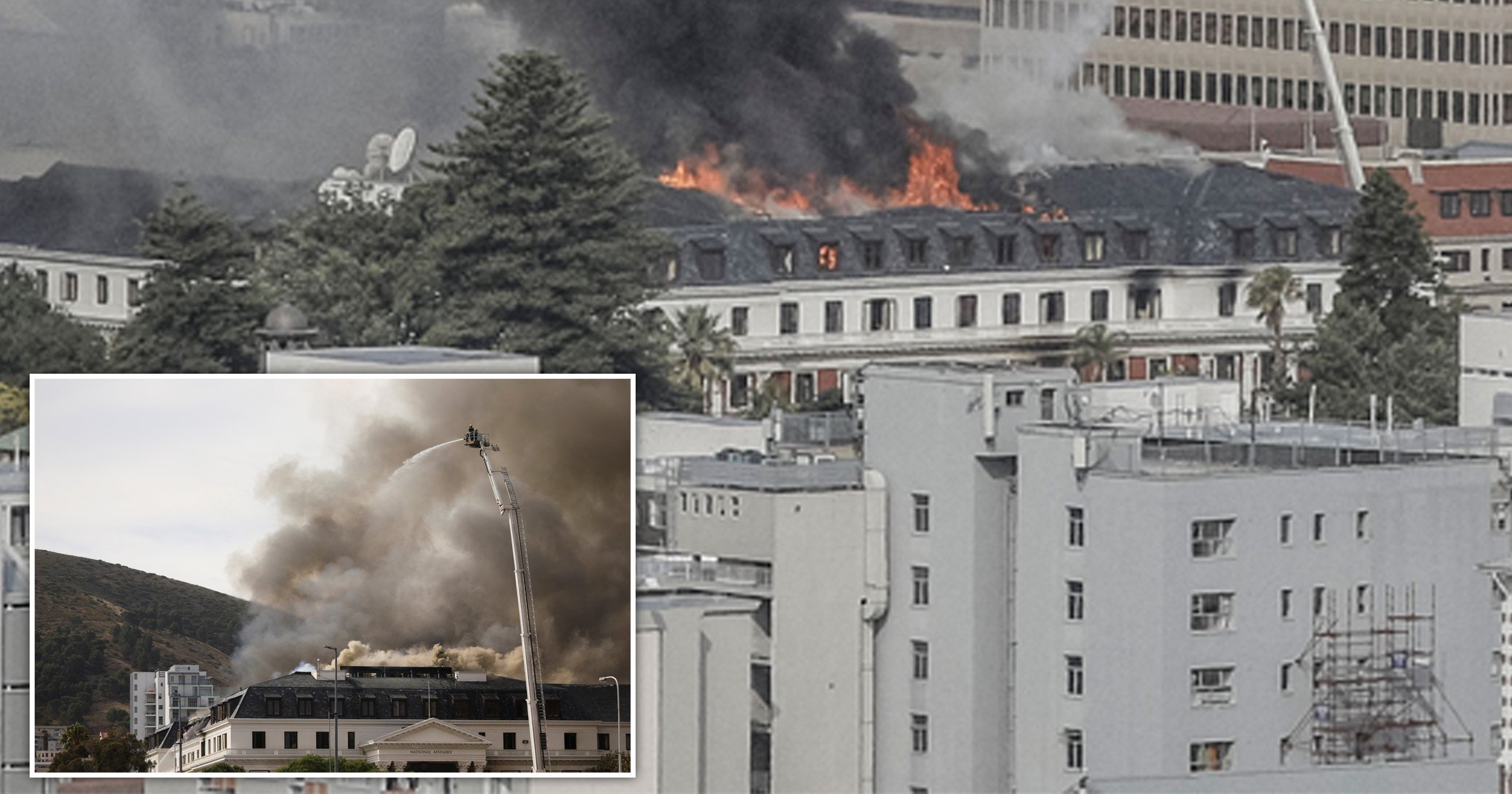 South Africa’s national parliament is on fire again after a devastating blaze flared up once more in Cape Town.

Firefighters are struggling to extinguish the flames more than 24 hours after they were first noticed.

A spokesman for the city’s fire services said: ‘The fire and rescue service confirms that the fire at parliament has flared up.’

Spokesman Jermaine Carelse added that the fire restarted in the roof of the building housing the national assembly at a time when only a dozen firefighters were still at the scene.

Parts of the roof have already collapsed and the latest development will worsen fears about the building’s integrity.

Earlier, the City of Cape Town safety and security official J.P. Smith said the main chamber of the National Assembly had been ‘completely gutted.’

Firefighters had said they were still working on ‘hotspots’ in the National Assembly building more than 24 hours after the fire started, according to Mr Carelse said.

But the fire crews had been scaled back from around 70 firefighters Sunday to 20 by Monday morning.

Other buildings in the complex were also damaged by the fire that started early on Sunday morning and spread from an old Parliament building that now houses offices to the National Assembly building.

A man was arrested in connection to the blaze on Sunday and is being questioned, police said.

He is due to appear in court on Tuesday and is expected to face charges of breaking and entering, theft and arson, while he will also be charged under South Africa’s National Key Points Act, a security law controlling access to places of national importance and government buildings.

The building has been at the centre of South African history for more than 130 years, lasting through British colonialism, the apartheid regime and South Africa’s transition to democracy under Nelson Mandela’s presidency.

The arrested man had to be rescued from the fire on Sunday, according to South African media reports.

Parliament was closed for the holidays and no injuries were reported.

Patricia de Lille, the Minister of Public Works and Infrastructure, said that someone had turned off a valve which prevented a fire sprinkler system from functioning.

She added an investigation into the cause of the fire has been taken over by the Hawks, a South African police unit that deals with serious and high-profile crimes.

This is a breaking news story, more to follow soon… Check back shortly for further updates.

Got a story? Get in touch with our news team by emailing us at [email protected] Or you can submit your videos and pictures here.