Andrew Harvey, from Liverpool, worked at the warehouse in Speke, Merseyside for eight years and says he constantly feared for his safety.

The single dad has collected evidence from his time at the warehouse, including an incredible video of a stack of pallets falling 18ft and narrowly avoiding a worker below. 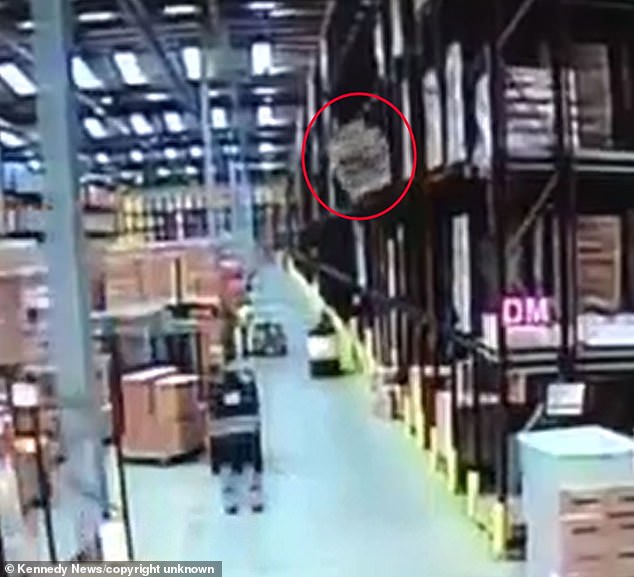 The crate hangs precarioisly off the edge of the storage frame, Andrew says it was just one of a number of incidents that left him fearing for his safety at the B&M warehouse

The 38-year-old said: ‘I constantly worried for my own safety. If you thought about it too much you wouldn’t be able to function in there.

‘[These things] happened so often we became desensitised to it, but when you saw a near-miss right in front of you it brought back the reality of how easily you could be killed.’

Other images show pallets having slipped off the racking but remain dangling precariously above the warehouse floor or even entire steel racking beams having crashed to the ground.

The 38-year-old claims thousands of pounds worth of stock often crashed to the floor from shelving and staff could ‘easily have been killed’. 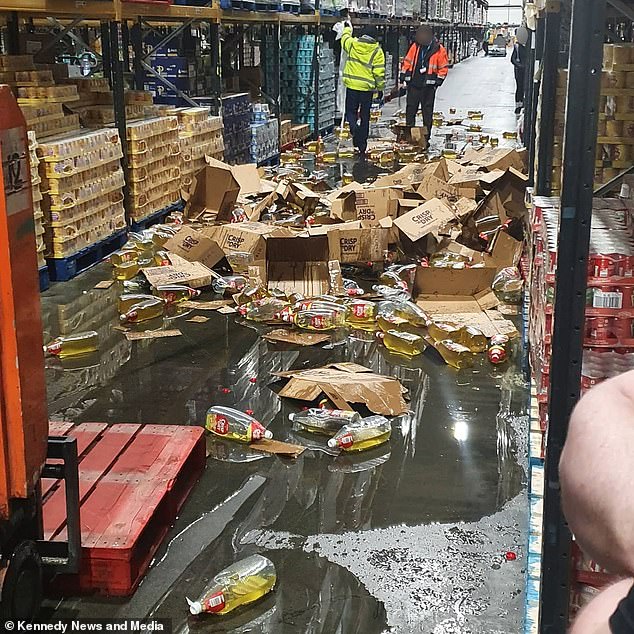 Olive oil lines the floor of B&M’s Speke warehouse safer boxes fell from above, staff can be seen trying to clear the spillage up 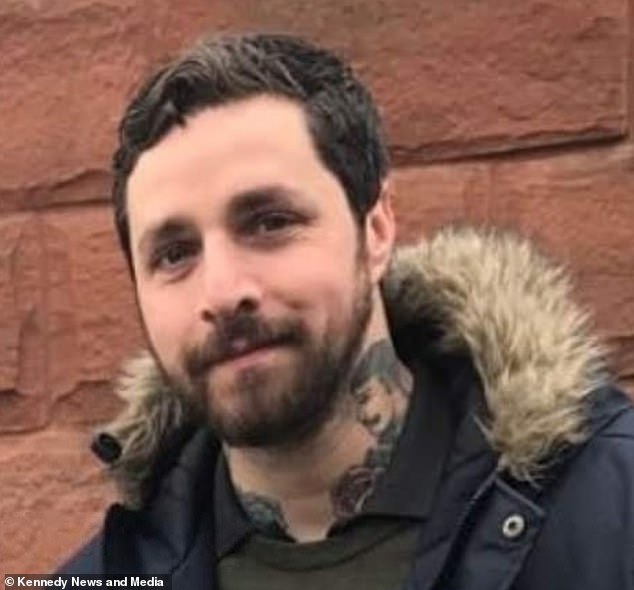 Andrew Harvey, 38, from Liverpool, has since left the B&M warehouse in Speke, but wants to raise awareness of the safety concerns he witnessed during his eight years working there 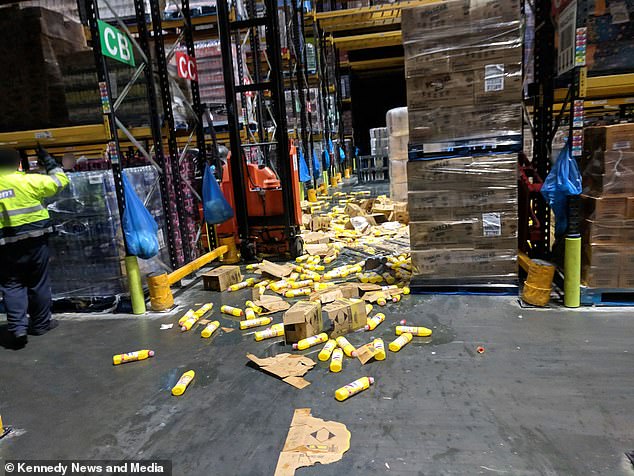 For the last three years Andrew Harvey, from Liverpool, has been taking photos and videos of spillages and near-misses at B&M’s warehouse in Speke, Merseyside

Despite claiming safety concerns were repeatedly raised to management, Andrew said the incidents continued and says former colleagues who work there claim it is still happening.

Andrew is now sharing his experiences inside B&M’s warehouse in Speke, Merseyside, to ‘prevent other workers from being put at risk’.

Andrew, from Liverpool, Merseyside, said: ‘After the incident where the pallet fell 18ft, everyone was shocked.

‘It felt like the situation was never taken seriously because it was a constant worry that most staff had.

‘What [appears] in these pictures is a very, very common occurrence.

‘I felt in danger because of the state of the warehouse. I’m not exaggerating – every shift I saw [things like this] or near misses.

‘Whenever we’d see something that wasn’t safe we’d report it to the line manager [but it kept happening]. 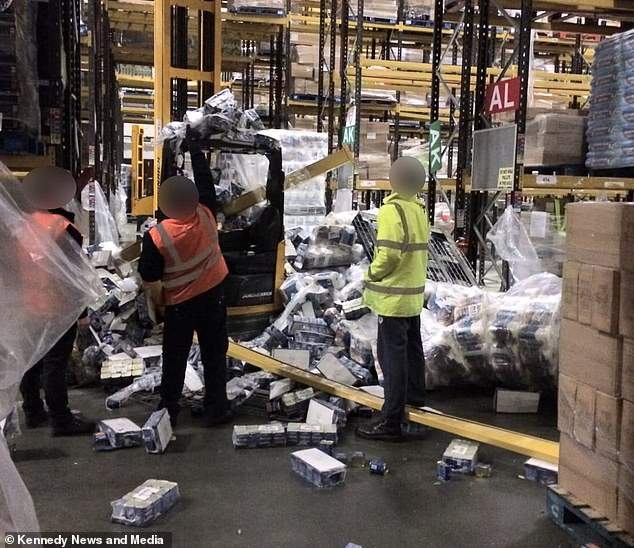 Boxes have fallen onto and around a forklift truck as it picked up products inside the B&M warehouse in Speke, Merseyside 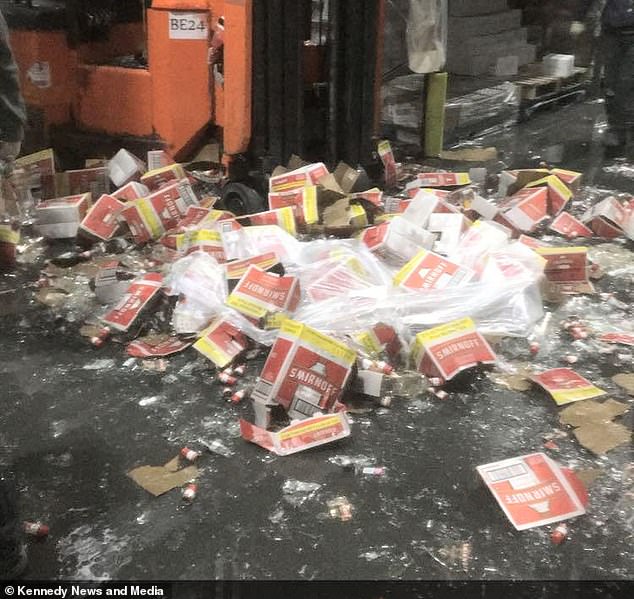 Smashed boxes of Smirnoff on the floor of the Speke warehouse, Andrew Harvey took pictures of safety concerns he witnessed over the last three years of his time with B&M 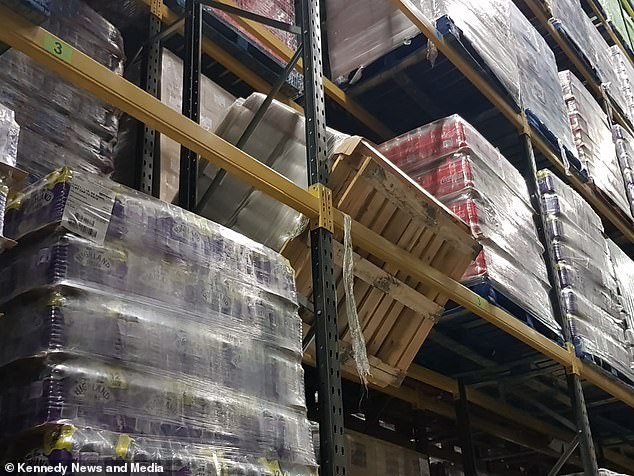 Andrew, who has a 10-year-old daughter named Alyssa, stopped working for B&M around four weeks ago and has since found a new job as a warehouse operative

‘As far as I’m aware, nothing has changed in the warehouse since I left. Definitely not from what I have heard. I’ve had a lot of messages from people telling me it’s just as bad.

‘I want to make sure my [former] colleagues are not in danger now so things can change for the people in there.’

Andrew, who has a 10-year-old daughter named Alyssa, stopped working for B&M around four weeks ago and has since found a new job as a warehouse operative.

B&M declined to comment but confirmed that the footage was from their warehouse.