‘My husband’s four-year sentence for strangling his lover during ”rough sex” fills me with anger’: Sam Pybus’ jail term sparked calls for a judicial review. His wife supports them and reveals he liked to choke her too

Louise Pybus was warming croissants in the oven when there was an unexpected knock at the door. It was a Sunday morning in early February.

Standing on her doorstep in the pretty village of Middleton St George, County Durham, were two plain-clothed detectives, their faces grim.

Louise’s panicked thoughts turned instantly to her husband Sam, who had failed to return home the night before.

The officers could offer her precious little reassurance: only that Sam had been detained on a charge they could not disclose, and that they had a warrant to search the couple’s two-bedroom home.

Louise, 29, fought down the concern which gnawed at her gut, trying to convince herself that there must be some mistake; that the police had the wrong man. 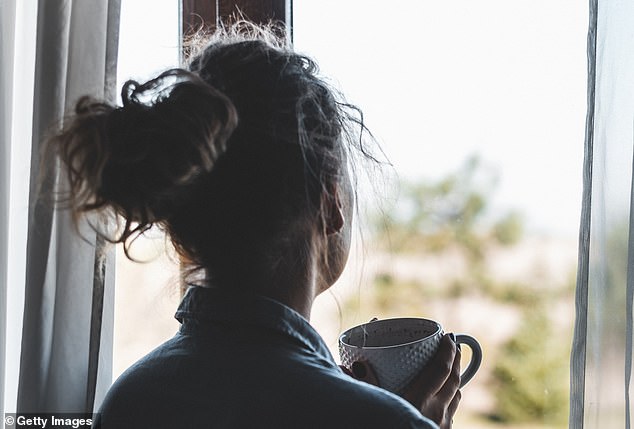 Louise Pybus was warming croissants in the oven when there was an unexpected knock at the door. It was a Sunday morning in early February

But what she learned in the agonising hours and days which followed shattered not only her five-year marriage, but her whole life.

‘The very first thing they asked me was, ‘Did Sam ever strangle you in bed?’ Louise recalls, with a shiver. ‘And that’s when I found out what he’d done.’

It’s a tale which makes for horrifying reading. Sam Pybus, 32, had drunk 24 bottles of beer before strangling 33-year-old Sophie Moss, a vulnerable mother-of-two, during what was described at Teesside Crown Court earlier this month as ‘consensual rough sex’ at her flat in Darlington.

Originally charged with murder, Pybus claimed Sophie had ‘encouraged and enjoyed’ having pressure applied to her neck during their three-year liaison.

The Crown Prosecution Service subsequently reduced the charge to manslaughter, and Pybus was sentenced to four years and eight months, after Judge Paul Watson QC, the recorder of Middlesbrough, accepted there was no intent to kill, and that he was genuinely remorseful.

The controversial sentence has sparked an extraordinary backlash, leading to calls for further scrutiny of the CPS and a review by the Attorney General.

Campaigners also point to the fact that the so-called ‘rough sex’ loophole, which has historically allowed abusers to get reduced sentences by claiming their victims consented to attacks, was abolished in law earlier this year with the passing of the Domestic Abuse Act.

Louise – still reeling from the betrayal and shock of the past seven months – wants a review of Sam’s sentence. For what she has rarely admitted publicly until now is that she knew only too well of Pybus’s predilection for sexual violence – and was a victim of it herself, as she confessed to police officers investigating Sophie’s death. 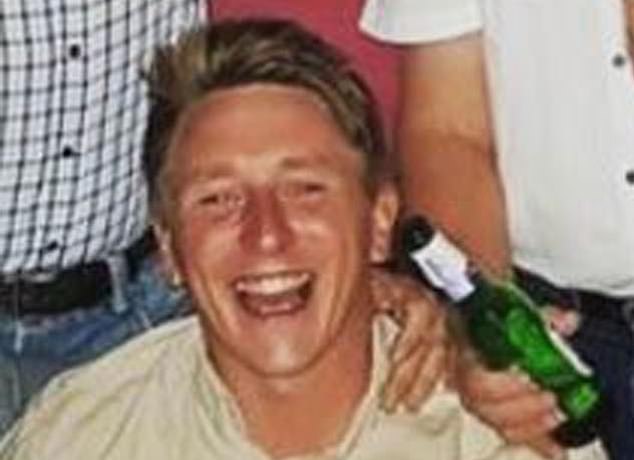 Originally charged with murder, Pybus (pictured) claimed Sophie had ‘encouraged and enjoyed’ having pressure applied to her neck during their three-year liaison

Speaking to The Mail on Sunday, Louise reveals that the couple’s relationship, in the early days at least, had a ‘darker side’.

‘He was sexually violent to me at the beginning of our relationship,’ she says. ‘He would strangle, slap and things like that.

‘I was young, and just thought to myself, ‘This is what people do now. This is the norm. If I say I don’t want to do that, what’s he going to think of me? He’s going to think I’m boring.’ ‘

To Louise’s credit, she found the strength to put a stop to that aggression, making it clear that she was unwilling to continue. It was, she says, something Pybus appeared to accept.

What she could not have known was that – tragically, as it turned out – he was using Sophie to act out his fantasies.

The couple met eight years ago at a bar in Darlington, when Louise, now an English teacher, was 21. She remembers him then as ‘a nice, normal guy’.

‘I guess you could say that he had a good sense of humour and he was fun,’ she says. ‘He was quite romantic and sweet when we first got together, but that soon stopped.’

The couple married in July 2016, a month after moving to Middleton St George.

It was the village where Pybus had grown up and he was a well-known member of the community, spending a considerable part of the weekends in the local pubs. To Louise’s mum, Pybus was ‘like a son’. 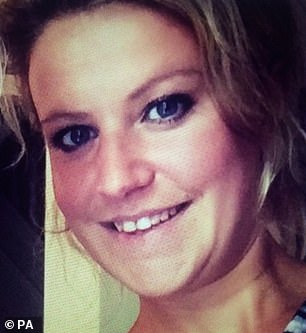 Sam Pybus, 32, had drunk 24 bottles of beer before strangling 33-year-old Sophie Moss, pictured, a vulnerable mother-of-two, during what was described at Teesside Crown Court earlier this month as ‘consensual rough sex’ at her flat in Darlington

But every weekend without fail he would start drinking on a Friday, and often not come home. ‘He would say, ‘I’m just going out for a pint.’ Then he would go out and just not come home and I was left there wondering where he was.’

It was not easy to live with him. His heavy drinking and cocaine use meant he struggled to hold down a job. Stints as a factory worker and delivery driver never lasted long.

Gradually, Louise became aware that he was texting other women in the village, asking for sex.

One night, in September 2016 – just two months after their wedding – they were in the pub when a woman, clearly distressed, arrived following an argument with her boyfriend.

This was Sophie Moss, and although they had never met before, Louise was concerned enough to invite her back to their home.

Looking back, Louise believes that night marked the start of her husband’s liaison. Sophie had gone by the time she awoke the next morning, while Pybus was acting ‘shifty’, she recalls.

Louise, who is studying for a PhD in linguistics, admits she considered leaving the marriage many times. But each time, Pybus used manipulative tactics to persuade her to stay.

‘Every time I wanted to break up with him he would threaten to kill himself,’ she says. ‘I knew he was emotionally abusing me, but that doesn’t stop it happening. I remember thinking the only way either of us are getting out of this relationship is if one of us dies.’

Perversely, the first coronavirus lockdown in early 2020 improved their relationship because Pybus was unable to go to the pub.

But when the restrictions were lifted last summer, the old habits returned. And on the evening of Saturday, February 6, this year, they turned fatal.

Louise recalls how they had enjoyed a quiet day at home, watching a rugby game on television together, before taking part in a Zoom quiz. She then went to bed while Pybus stayed downstairs playing on his Xbox.

At some point that evening, he went out, and Louise assumed he’d gone to see a friend. But that was far from the truth.

As a court would hear, he had consumed 24 bottles of Amstel by the time he got behind the wheel and drove the five miles to Sophie’s flat in Darlington.

There, Pybus applied what experts described as ‘sustained pressure’ to her neck while they had sex until she lost consciousness. Rather than give first aid to Sophie, or call for an ambulance, Pybus sat in his car on the street outside for 15 minutes, thinking about what to do next.

He later turned himself in and was charged with murder.

But his defence was to claim the violence was consensual, and Sophie’s death a tragic accident.

Pybus claimed to have little recollection of what happened, telling officers he only remembered waking up in his boxer shorts to find Sophie unresponsive.

He believed he must have strangled Sophie, he told them, because his hands were hurting – and added that she had previously enjoyed having ‘mild pressure’ applied to her neck during intercourse.

The CPS concluded there was not enough evidence that Pybus had intended to harm her. This meant he was charged with the lesser offence of manslaughter.

It comes as little surprise to Louise, who is now getting a divorce.

‘He always played the victim. So it doesn’t surprise me at all that he’s shifted the responsibility on to her and says she asked for this to happen.’

The sentence has also left Sophie’s family distraught. She leaves behind two boys, aged five and six, and was described in victim statements as an animal lover who doted on her children, despite her troubled life.

She was ‘joyous, vibrant, funny, talented, and fearless’, her brother James wrote.

He added: ‘We will never be able to shake the belief that whatever the nature of their relationship, and her role in it, that she was a victim, taken advantage of and exploited, and was subjected to an entirely avoidable and infinitely tragic end.’

Over the past seven months – and particularly over the past week – Louise’s shock and distress has grown into anger, not only at Pybus’s betrayal, but at the authorities.

A manslaughter charge can still carry a possible life sentence and many, including Louise, see it as bewildering that Pybus – despite admitting to killing a woman – will serve such a short prison term. She says it makes a ‘mockery’ of justice for women.

‘I could not believe that he got such a short sentence for taking someone’s life and I felt galvanised to do something,’ she said.

‘That’s why after staying silent for seven months, I decided to speak out.’ Louise believes Sophie’s vulnerability meant she was treated as a ‘second-class citizen’ by the police and the courts, and this may have made Pybus’s defence appear more credible.

‘There was a moment when I hated Sophie,’ says Louise. ‘But the more details I found out about her and her life, the more I realised that she was a vulnerable, lonely, isolated woman with awful physical and mental health issues and he just exploited her.

‘Who knows whether she would have found an opportunity to turn her life around? He’s taken that chance away.’

It is not the only recent case which has sparked a national conversation about sexual violence.

Following the death of Sarah Everard, who was abducted from a Clapham street before being raped and strangled by a Met Police officer, thousands of women have spoken of their experiences of fear and sexual harassment.

And the case has striking similarities to the 2018 murder of British tourist Grace Millane, who was strangled in New Zealand by Jesse Kempson, a man she met on the dating app Tinder.

Crucially, Kempson was convicted of murder, and jailed for 17 years, after the jury rejected his claim it was a rough sex game which went too far.

‘This sentence has made me feel pure rage and devastation for women. It’s just such an injustice. It also doesn’t reflect the level of grief that he’s rippled through this whole community.’

She adds: ‘It’s not just Sophie’s family – although that in itself is enough – he’s caused his friends to question themselves and my family as well because my mum saw him like a son.’

Campaigners, including former Justice Minister Harriet Harman and women’s group We Can’t Consent To This – which campaigns against the use of ‘rough sex’ defences to escape justice – are hoping the Attorney General will appeal against the ‘unduly lenient’ sentence.

Ms Harman, who chairs Parliament’s joint committee on human rights, wrote that Pybus’s sentence sent out ‘the message that killing your girlfriend during sex is a minor matter’.

Louise adds: ‘If this gets overturned and he gets a longer sentence, that sends out a clear message that men should not be sexually violent towards women.

‘Men need to start questioning why they get a kick out of strangling a woman.’