Scourge of the bookies behind racing’s most outrageous sting: A secret syndicate of 100 punters, a scam months in the planning… But as DAVID JONES reveals, the audacious 1975 coup by Barney Curley, who has died at 81, was the start of an astonishing tale

The burly man in the telephone box was causing quite a stir. For the summer holiday crowd gathered at a remote Irish racecourse, in those days before mobile phones, this was the only means of communication; yet despite the long queue outside, he refused to hang up.

When anyone banged on the glass and urged him to end his call, he would affect a mournful expression and tell them his aunt was on her deathbed.

‘Oh dear, she’s taken a turn for the worse, has she nurse?’ he would mouth, waving the intruder away.

This was particularly frustrating for the on-course bookmakers, who relied on last-minute news of the wagers being staked in betting shops to set the appropriate odds.

With the solitary phone constantly engaged, they had no idea whether a horse ought to be priced as the red-hot favourite or as a rank outsider.

Watching this scene from his hideout behind a gorse bush near the finishing post, Barney Curley rubbed his hands. Everything was going according to plan. 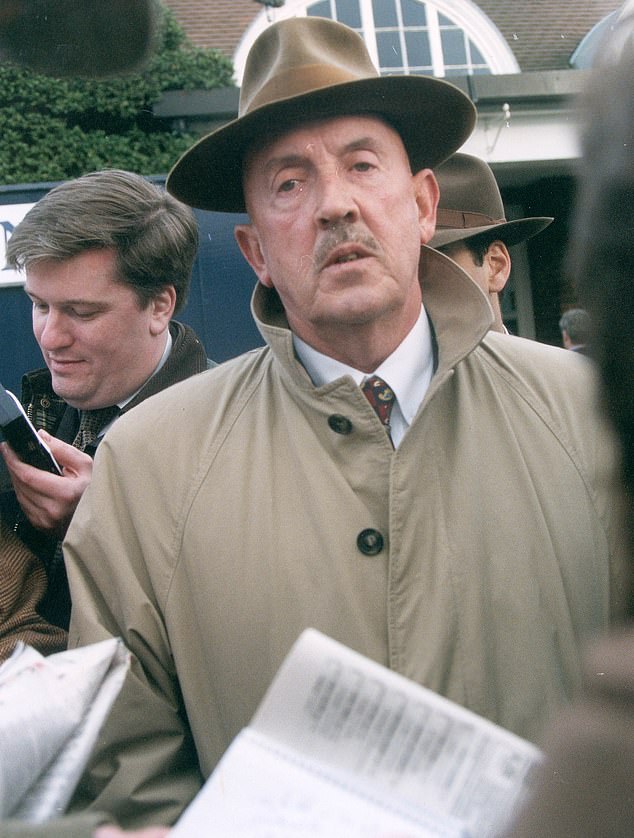 Pictured is Irish racehorse trainer Barney Curley, orchestrator of racing’s most outrageous sting in Bellewstown in 1975

In truth, there was no ‘dying aunt’ and the man in the phone box was one of the team he had assembled to pull off one of the most audacious stings in the long, chequered history of horse racing.

The mount Curley had entered in the three o’clock race at Bellewstown, County Meath, that day in June 1975 — a chestnut gelding called Yellow Sam — had never come close to winning before. His previous best placing was eighth.

But that was only because his trainer had cunningly pitted him against superior horses, running at distances to which he was unsuited, so he would be considered a no-hoper.

Although he was priced at 20-1, Curley felt sure he would triumph over the weak field.

He had enlisted 100 punters, whom he instructed to wait until shortly before the race, then scuttle around as many betting shops as possible, placing dozens of small bets totalling £15,300 on Yellow Sam, so as not to arouse suspicion and bring down his odds.

By the time the phone box was vacated and frantic betting shop staff began calling the racecourse to raise the alarm, it was far too late. Yellow Sam had romped to victory.

Emerging from behind the gorse bush (where he had hidden because his formidable appearance already struck fear and suspicion into every bookmaker in the land), the man with the intimidating stare, toothbrush moustache and broad-brimmed fedora swaggered off to collect his winnings: a sum that would today amount to almost £2 million. 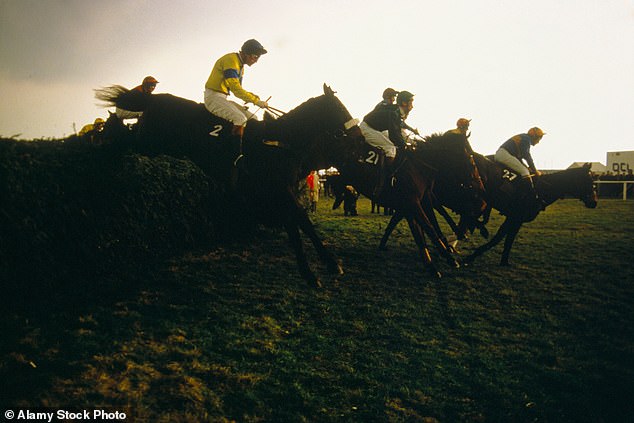 Bellewstown wouldn’t be the last time the legendary Curley, who died recently aged 81, combined military-style planning and outrageous chutzpah to clean out the bookies

It wouldn’t be the last time the legendary Curley, who died recently aged 81, combined military-style planning and outrageous chutzpah to clean out the bookies; a fraternity he had good reason to despise.

His colourful and multi-layered life story, already told grippingly by his biographer, former Mail writer Nick Townsend, must surely be made into a film.

For there could hardly have been a less likely, nor more philanthropic, super-punter than Bernard Joseph Curley.

One of six children raised on a bleak farm in Ulster, he came from a Roman Catholic family so poor that he tramped the two miles to his village school barefooted, saving his shoes for church on Sundays.

By wheeling and dealing, and smuggling contraband goods across the Irish border, however, his father Charlie changed their fortunes.

But he also raced greyhounds and bet heavily on them and, despite doping his dogs to fix race outcomes, he eventually lost everything.

Ashamed to show his face in their small town, he sloped off to Manchester to earn the money he needed to repay his debts, taking the teenage Barney with him.

They found employment in a plastic-moulding factory, working double shifts between 5am and 11pm to make extra cash.

So, at 16, Curley had seen his family impoverished and humiliated at the hands of bookmakers — men who, even in those days, always seemed to live in the best houses and drive the smartest cars.

One day he would make them pay for this indignity.

More immediately, though, he was impressed by the way his father’s religious faith sustained him.

So he decided to become a priest, enrolling in a Jesuit college where his ordination would require 13 years of self-denying, dauntingly rigorous training.

He might have seen it through, had he not caught tuberculosis at the age of 20. His convalescence took 18 months, during which he reflected that he wasn’t cut out for the cloth.

He was destined to swap the Good Book for the form book.

First, though, he became a travelling salesman. Then followed a bizarre period as the manager of a showband called Frankie McBride and the Polka Dots, whose record Five Little Fingers reached number 19 in the charts in summer 1967.

Curley used the Ford Transit van that carried the group’s amplifiers to smuggle cheap razor blades across the Eire border. 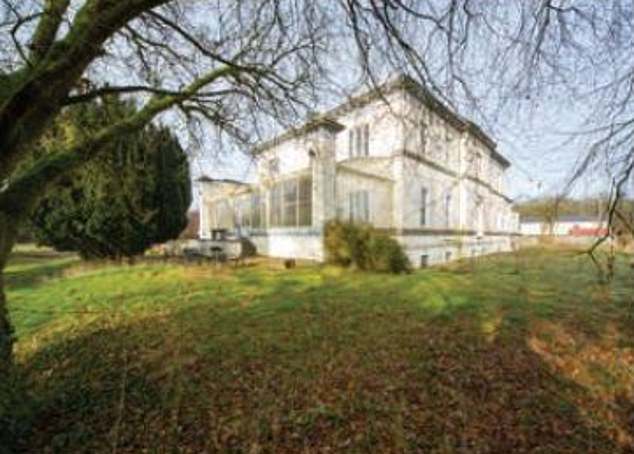 Curley and his Lancastrian wife Maureen acquired Middleton Park House (above), a 47-room Georgian mansion set in 377 acres on the shore of Lough Ennell

From the day he attended a race meeting with a Jesuit college friend whose father was a trainer, though, he had been entranced by the jockeys’ colours and the pounding of hooves, and his heart was set on making his living from the turf.

In his late 20s he tried his hand at bookmaking but a series of losses told him he was better suited to defying the odds than making them.

And so began his lifelong quest to beat the fat cats of Ladbrokes, Joe Coral and their ilk at their own, unequal game — while always remaining on the right side of the law, although sometimes it was a close-run thing.

Money was never his motivation, he insisted. ‘It was always the challenges. Nothing else.’

Although he devised the Yellow Sam scam to repay debts incurred as a bookie, it made him suddenly rich.

He and his Lancastrian wife Maureen (whom he met at a racetrack while she was on holiday in Ireland, and who bore him three children) acquired Middleton Park House, a 47-room Georgian mansion set in 377 acres on the shore of Lough Ennell.

The estate, with its own racing stud, was reputedly the birthplace of Lawrence of Arabia.

But by 1983 the maintenance costs were too steep — added to which, Curley’s notoriety made it almost impossible for him to place large bets in Ireland.

He decided to base himself in Newmarket instead and pit his wits against English bookies. But first he had to sell the estate.

The property market was depressed at the time and his asking price of £1 million-plus was unlikely to be reached.

So with typical ingenuity, Curley decided to raffle Middleton Park, calculating that 9,000 tickets sold at £175 each would raise £1,575,000.

To circumvent gaming laws, each participant in the raffle would ‘buy’ membership of a local Gaelic football club, and a sum would be donated to a wheelchair charity.

His ruse made international headlines and celebrities including Eric Clapton and the racing tycoon Robert Sangster entered the draw, which was won by a syndicate from Gloucester.

However, after a police probe, Curley was prosecuted. A magistrate found him guilty and jailed him for three months; a sentence commuted on appeal to probation.

With Curley resettled in the home of British racing, his battle against the bookies continued.

To some he was a modern-day Robin Hood, picking well-lined pockets on behalf of ordinary punters everywhere; to others he was just a shark.

He almost came to blows with the eccentric racing pundit John McCririck after the latter slurred his reputation on live TV.

Curley’s entire outlook on life changed in December 1995 when his 18-year-old son, Chuck, was killed in a car crash.

Stricken by the futility of wealth and humbled by the missionary work of his former Jesuit college compatriots in Zambia, he set up a charity called Direct Aid for Africa, into which he ploughed much of the money he plundered from bookmakers.

It built two schools, which Curley would frequently visit.

‘Don’t paint me as a saint or anything like that,’ he would say to those who praised him.

‘It’s just me taking a bit of fire insurance in case things get tricky at the Pearly Gates.’

In his later years, his African charity took precedence over racing.

However, in 2010, when he saw an opportunity to reprise his Yellow Sam sting, he couldn’t resist the challenge.

By then the bookmakers’ sophisticated digitised monitoring system had made it harder for anyone to slip under their radar.

Yet by recruiting a small army of punters to fly into London from Ireland, then cycle round the capital’s betting shops to place small accumulator bets on four of his horses — three of which won — he is estimated to have scooped another £3.9 million.

He is also said to have masterminded another coup, netting more millions, in 2014.

To Curley, the amount was immaterial.

‘I don’t have much regard for money,’ he told his biographer Nick Townsend.

‘I don’t want to depart this world with people saying: “He was the one who pulled off that coup in 2010 or who skinned the bookmakers alive with that audacious plot at Bellewstown.”

‘I want to leave this world thinking I did a bit of good.’

Many will think Barney Curley galloped to his goal, though some out-of-pocket bookies will doubtless take a rather different view.