London: Prince Harry was told the news of his grandfather’s death by Santa Barbara police, after officers were called to his California home in the middle of the night.

Prince Philip, 99, died at Windsor Castle on the morning of April 9, prompting a series of urgent calls across the Atlantic shortly before 3am US time, 11am in the UK. 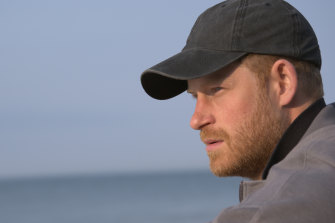 Prince Harry, Duke of Sussex, appears in a scene from “The Me You Can’t See” on Apple TV.Credit:AP

Buckingham Palace aides contacted the US embassy in London, which in turn called the Santa Barbara sheriff’s office. An officer was then dispatched to the home Harry and his wife Meghan, the Duchess of Sussex, share in Montecito, 16 kilometres away, to break the news.

Prince Harry, 36, is understood to have been asleep at the time.

It is not known whether family members tried to call him to break the news before police were alerted, but aides will have been acutely aware of the need to inform the prince before the media was alerted.

A spokesman for the Santa Barbara Sheriff’s office said it sent officers to the Sussexes’ home at 3am to tell him his grandfather had passed away, after it had not been possible to contact him in any other way. 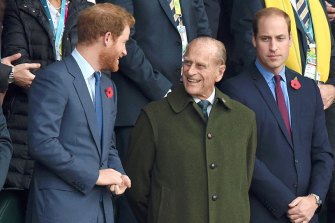 The deputy charged with relaying the news spoke to a security guard and the message was passed on. The death of the Duke of Edinburgh was announced by Buckingham Palace around one hour later, at midday UK time.

Harry flew back to the UK for the funeral, isolating in line with COVID requirements at Frogmore Cottage ahead of the ceremony.

Both a spokesman for Harry and the US embassy in London declined to comment.

In recent weeks, he has spoken at length about his mental health struggles in podcast and television interviews.

He further discussed his struggles in a new episode of the Apple TV+ documentary series he made with Oprah Winfrey, released on Friday. Harry appeared to be alluding to his own personal difficulties as he suggested that families feel “shame” over their mental health “suffering”. In earlier episodes of The Me You Can’t See, he accused the royal family of “total neglect”, suggesting they had “bullied him into silence” and that his father, Prince Charles, had told him that as he had suffered, his sons would suffer too.

He acknowledged in the latest 90-minute offering, filmed earlier this month, that families mask their mental struggles from close relatives, who are often aware they are hiding them but do not want to address the issue. Harry said: “As parents, and as siblings, there’s an element of shame that we feel because we’re like … ‘How could we not have seen it? How did we not know? How did you not feel comfortable enough to come to me and share that with me?’