I want an independent Scootland! Nicola Sturgeon takes to two wheels as polls show her SNP is on course for a new Holyrood majority despite Tory warnings she will drive country’s economy ‘off a cliff’

Nicola Sturgeon tested her skills on an electric scooter today as she met with members of the public ahead of the crucial Scottish Parliamentary elections next week.

The SNP leader appeared in high spirits as she took a ride on a Pure Electric scooter  and spoke with locals in the town of Troon, in South Ayrshire, and Glasgow while campaigning with the SNP candidate Siobhian Brown today.

The scenes came as opinion polls revealed the First Minister was on course to win another majority at the Holyrood election on Thursday.

However the latest predictions come amid warnings from Tories that the SNP leader could drive Scotland’s economy ‘off the edge of a cliff’ after she confirmed on Sunday that she wanted to hold a new referendum on leaving the UK by 2023. 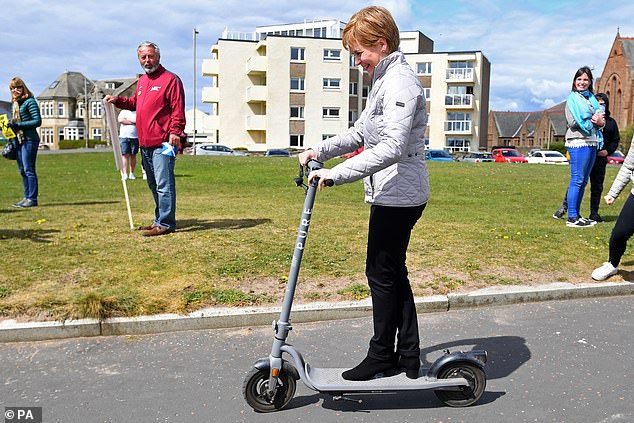 Nicola Sturgeon appears in high spirits as she tests her skills on an electric scooter in the town of Troon, in South Ayrshire, Scotland 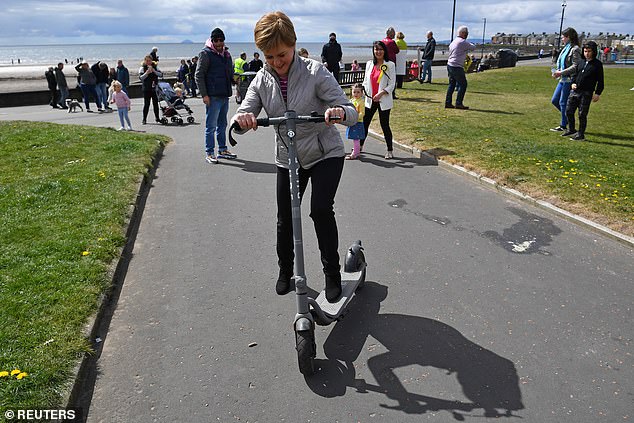 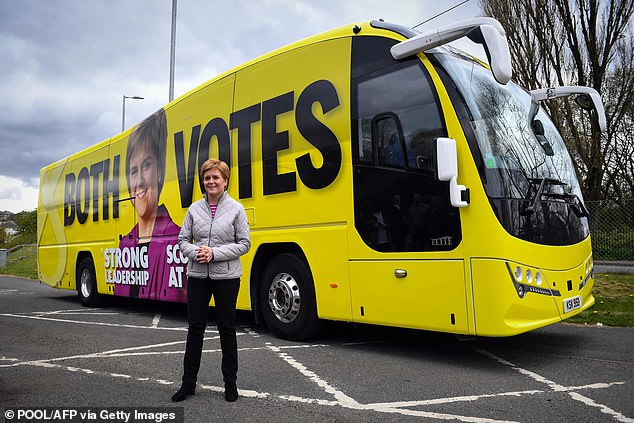 In a poll carried out for The Herald by BMG Research, which surveyed 1,023 Scots aged 16 or over between April 27 and 30, data showed Sturgeon’s party is set to win 68 seats, with research putting the SNP on 49 per cent of the vote in constituencies.

The figures also showed that the SNP is on 37 per cent on the regional list while the Tories are on 22 per cent.

A second poll, carried out for the Sunday Times by Panelbase, revealed the SNP were on 48 per cent, the Tories 21 per cent, Labour 20 per cent, the Lib Dems 7 per cnet and Greens 3 per cent in the constituencies.

Head of polling at BMG told The Herald: ‘There is no question that the SNP will be returned as the largest party in Holyrood next week, but their prospect of a majority remains on a knife-edge.

‘With little movement since our last poll in mid-March, there is no real evidence that any party has gathered significant momentum ahead of voters casting their ballots next week.

‘Using a uniform seat calculator – a general guide of estimating how votes might translate into seats – our numbers suggest that the SNP could win a small majority of seven, thanks to a close to clean sweep of constituencies.’

However the latest predictions come as Scottish Tories warned that the First Minister’s calls for a new vote on Scottish independence amid the coronavirus crisis could lead to spending cuts or tax rises.

Scottish Tory leader Douglas Ross told The Telegraph: ‘If she secures a Holyrood majority, she will hold a damaging and divisive referendum while Scotland is still reeling from the impact of Covid.

‘This is beyond irresponsible. When our Scottish Parliament should be entirely focused on rebuilding and recovery, Sturgeon will plunge us into chaos and uncertainty.

‘She talks about being in the driving seat – the problem is she wants to drive our economy off the edge of a cliff.’ 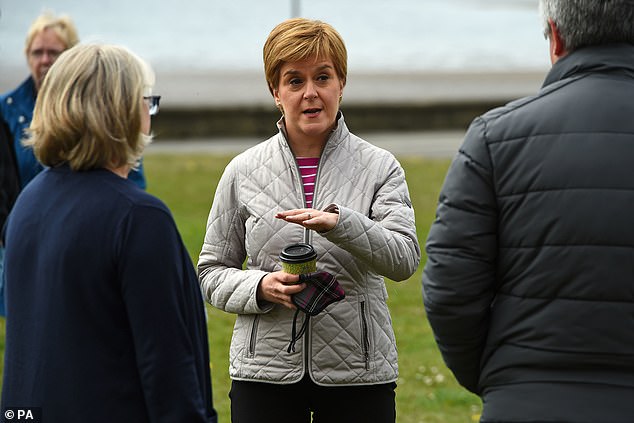 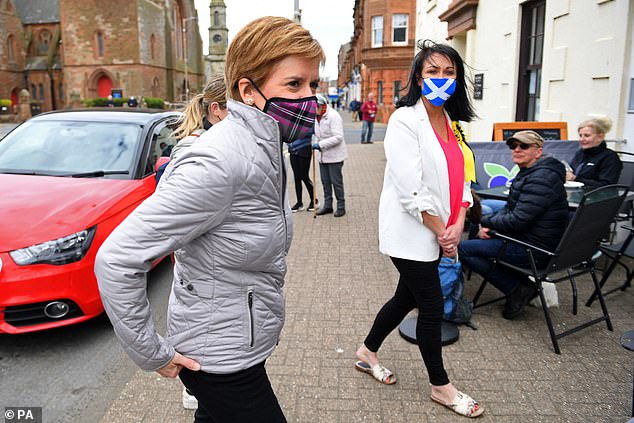 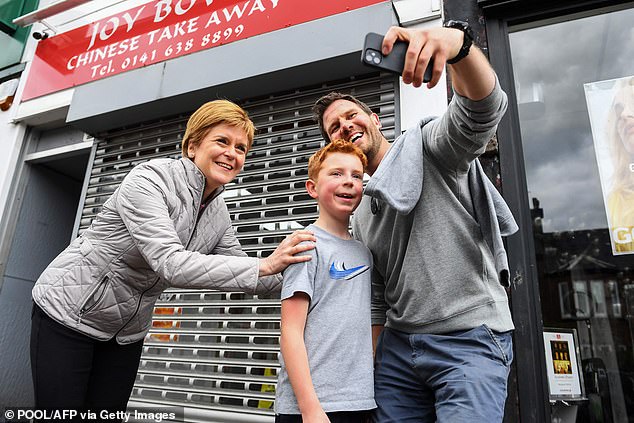 Ms Sturgeon takes a selfie with members of the public as she campaigns in Glasgow, Scotland

It comes after the SNP leader made clear she had no intention of putting her referendum drive on hold for the coronavirus recovery during a debate on Channel 4 this week.

When questioned about why she had failed to provide an economic analysis of independence despite planning another referendum, Ms Sturgeon said she had put all preparations on hold to allow her to focus on the coronavirus pandemic.

Host Krishnan Guru-Murthy said: ‘So delay the referendum. If you have put everything on hold why haven’t you said we are going to put the referendum on hold?’

Ms Sturgeon said: ‘I am not planning a referendum immediately. I’ve said… we should have the right to choose.

‘Just as we did in 2014, completely different to the Brexit referendum, we put forward a prospectus saying what independence meant, what the challenges would be. We will do that again.’

Earlier today Sturgeon claimed she was the only candidate in the Scottish Parliamentary elections offering serious leadership and who had put forward a serious plan to bring about recovery amid the pandemic. 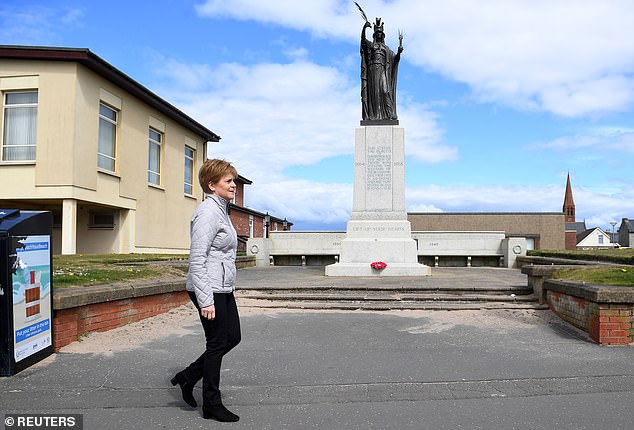 She told the BBC’s The Sunday Show: ‘I am the only candidate for first minister that is not just talking about recovery in this election but has put forward a serious plan but to bring about that recovery.’

Ms Sturgeon went on to say that the SNP were the ‘only party actually doing the work’.

She added: ‘We are not saying there are not big challenges to address in this country, but we are the only party actually doing the work and putting forward the plans to actually do that – and that’s the choice people have on Thursday.

This week sources revealed that Boris Johnson could take Nicola Sturgeon’s Scottish National Party (SNP) to the Supreme Court to put a stop to a second Scottish independence referendum, The Telegraph reported.

Legal advice dating back to 2011 suggests the Scottish Parliament cannot go ahead with the referendum without approval from the UK Parliament.