Damian Lewis and Helen McCrory’s nephew, 20, was killed in car crash after he shouted ‘s**t’ and ‘inexplicably’ veered onto the wrong side of road in head-on crash that left girlfriend with broken back

The nephew of British actors Helen McCrory and Damian Lewis died in a car crash after he ‘inexplicably’ drove on the wrong side of the road and shouted ‘s**t’ in a collision that broke his girlfriend’s back, an inquest has heard.

Former private schoolboy Hugo Yaxley, the son of Homeland star Lewis’s sister Amanda Yaxley, was just 20 years old when he died following the accident on the A30 by the Wiltshire village of Sutton Mandeville.

Mr Yaxley’s death last November was the first of a double tragedy for 50-year-old Lewis and his family, with his wife and Peaky Blinders actor McCrory dying from cancer aged 52 just five months later.

Before McCrory’s death last month on April 16, the actress had described Mr Yaxley as a ‘very rare young man’ who had ‘wisdom far beyond his years’ and said she was ‘so sad I’ll never see his smile again’.

Lewis said his nephew, who was a popular mental health campaigner based in Bristol, was ‘inspirational’ and ‘brave’ and ‘touched more people in his short life than most do in their longer ones’. 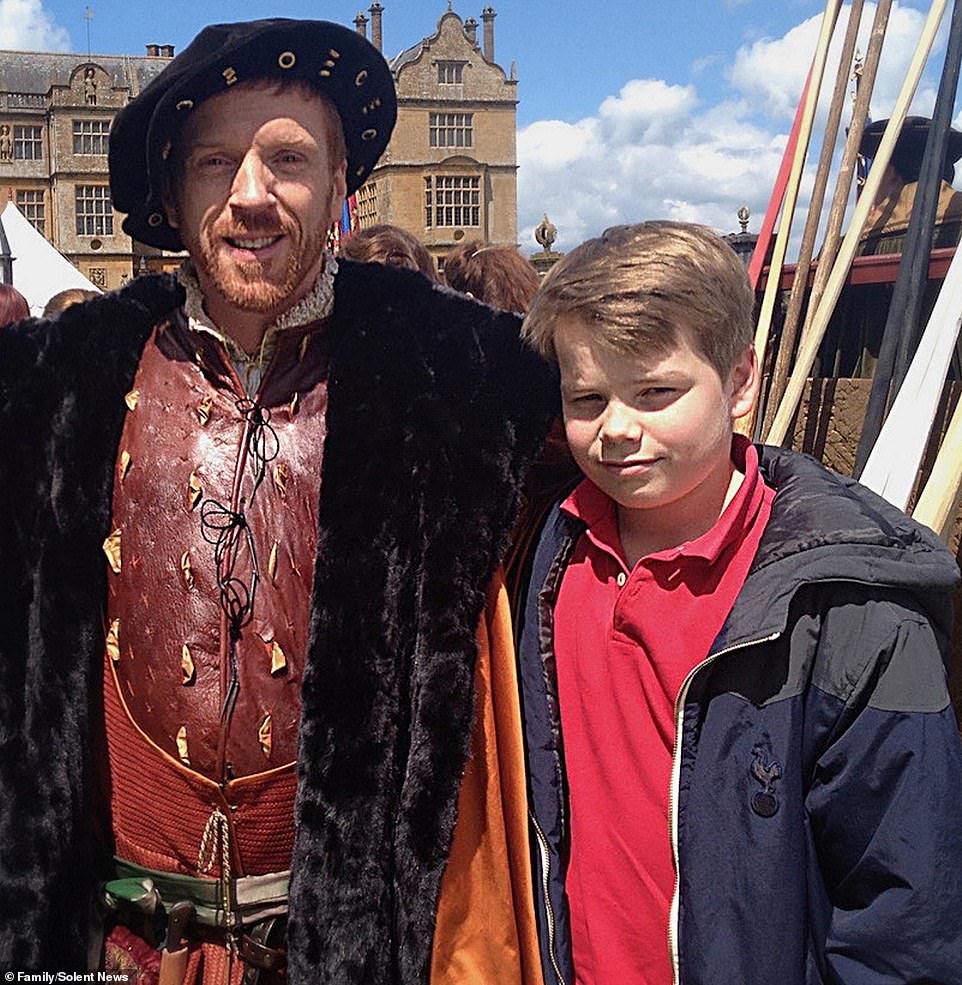 Hugo Yaxley with his uncle Damien Lewis during the filming of TV series Wolf Hall in 2015, in which he played Henry VIII 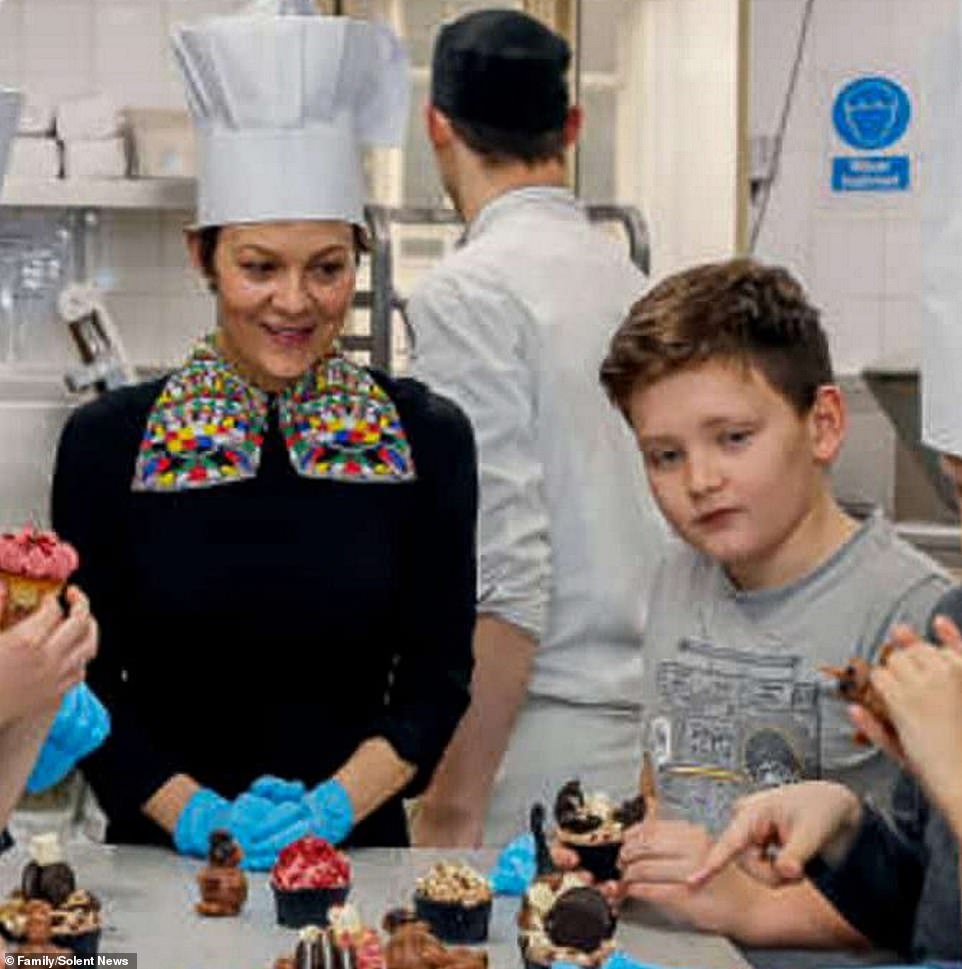 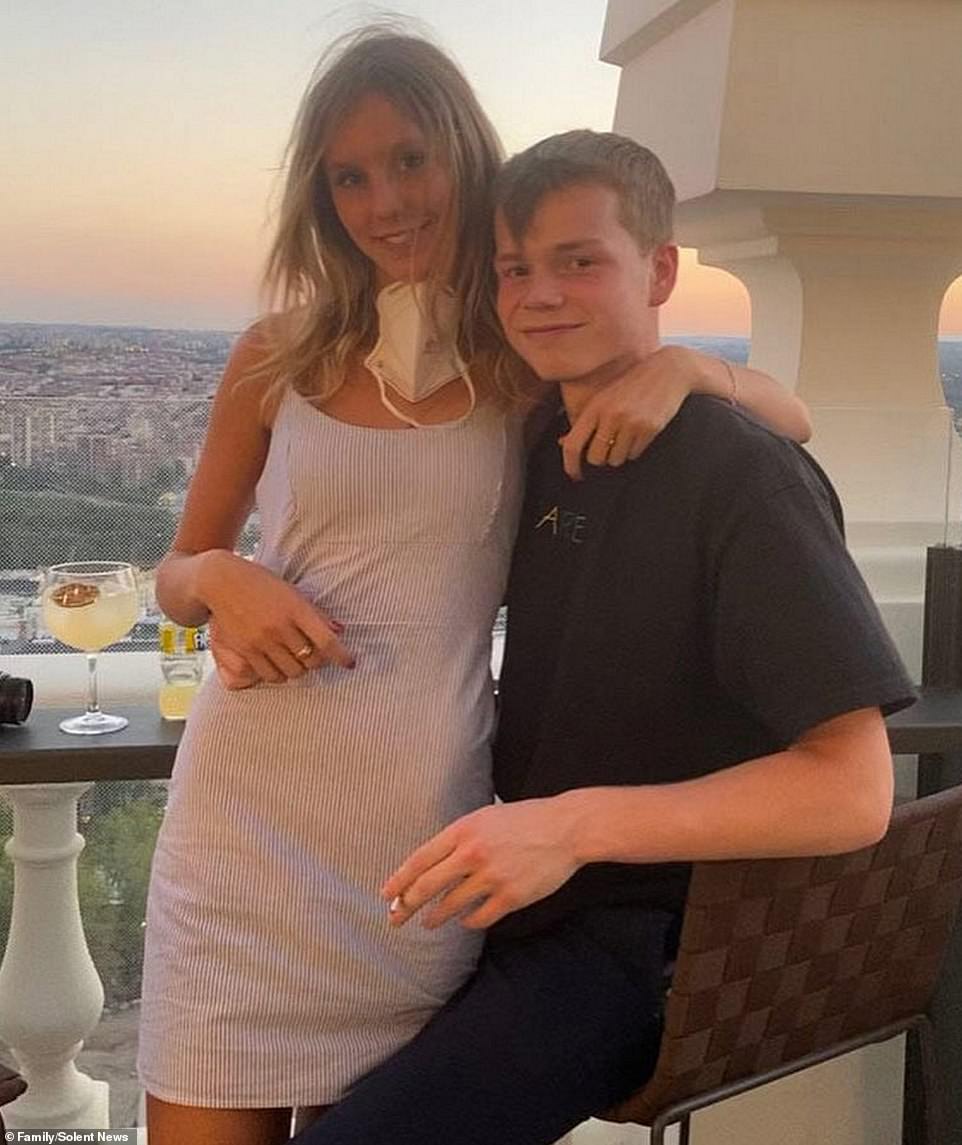 Hugo Yaxley with his girlfriend Minna Leatham, the ‘love of his life’ who was left with a broken back after the collision

Details of Mr Yaxley’s death were revealed for the first time at his inquest this week, which heard he was behind the wheel of a red Honda Jazz which smashed head-on into a Range Rover.

The hearing was told he was driving his girlfriend and two of their friends on the A30 on their way to dinner when he began driving on the wrong side of the road ‘for reasons that are unclear’.

His passengers told how they didn’t realise he was in the wrong lane – and it was heard that motorists tried to flash him, but after a third of a mile on the 60mph single-carriageway he smashed into the oncoming car.

The inquest at Salisbury Coroner’s Court heard Mr Yaxley died at Southampton General Hospital in the early hours of November 17 last year, just hours after the crash at about 5pm on November 16.

Mr Yaxley, described as a ‘safe driver’, shouted ‘s**t’ moments before the horror smash which left the ‘love of his life’ Minna Leatham with a broken back.

On a charity site created in Mr Yaxley’s honour, his aunt McCrory said: ‘Hugo was a very rare young man, an old soul, whose wisdom was far beyond his years. 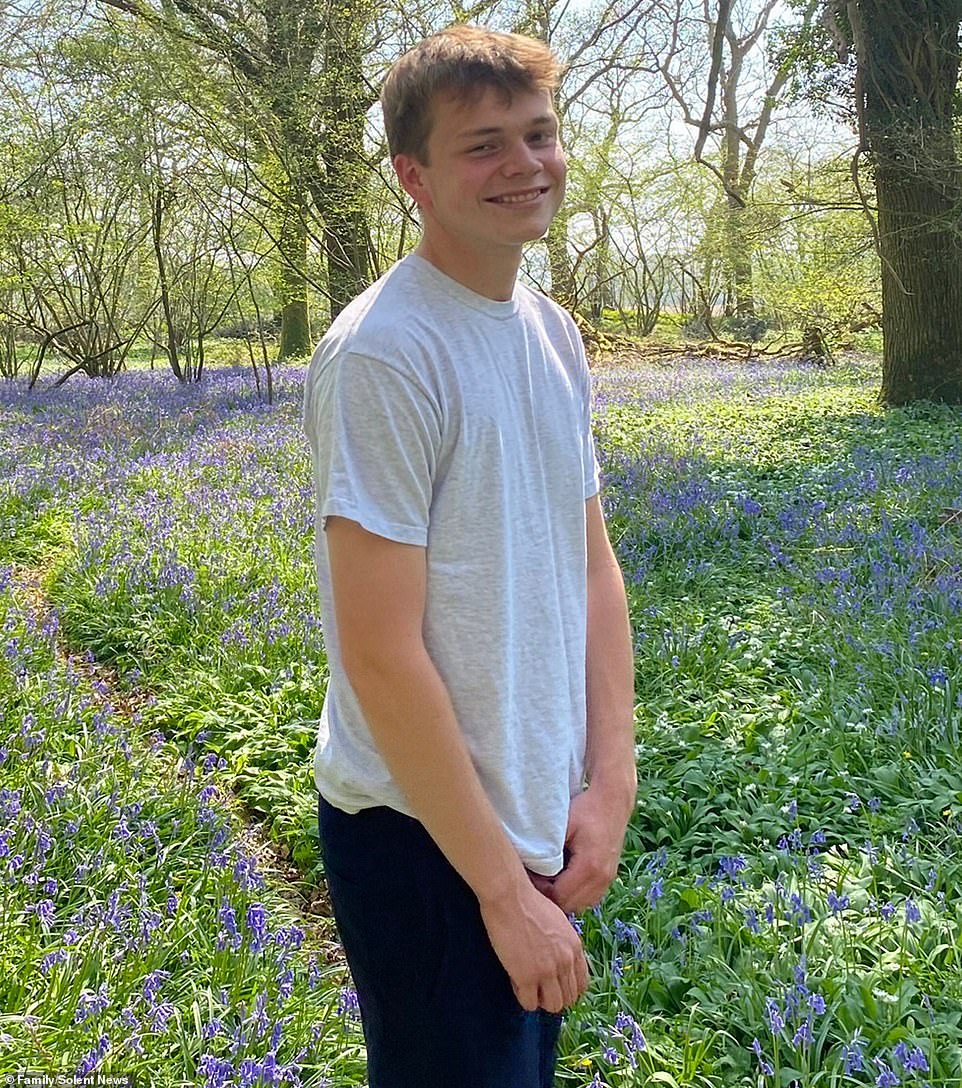 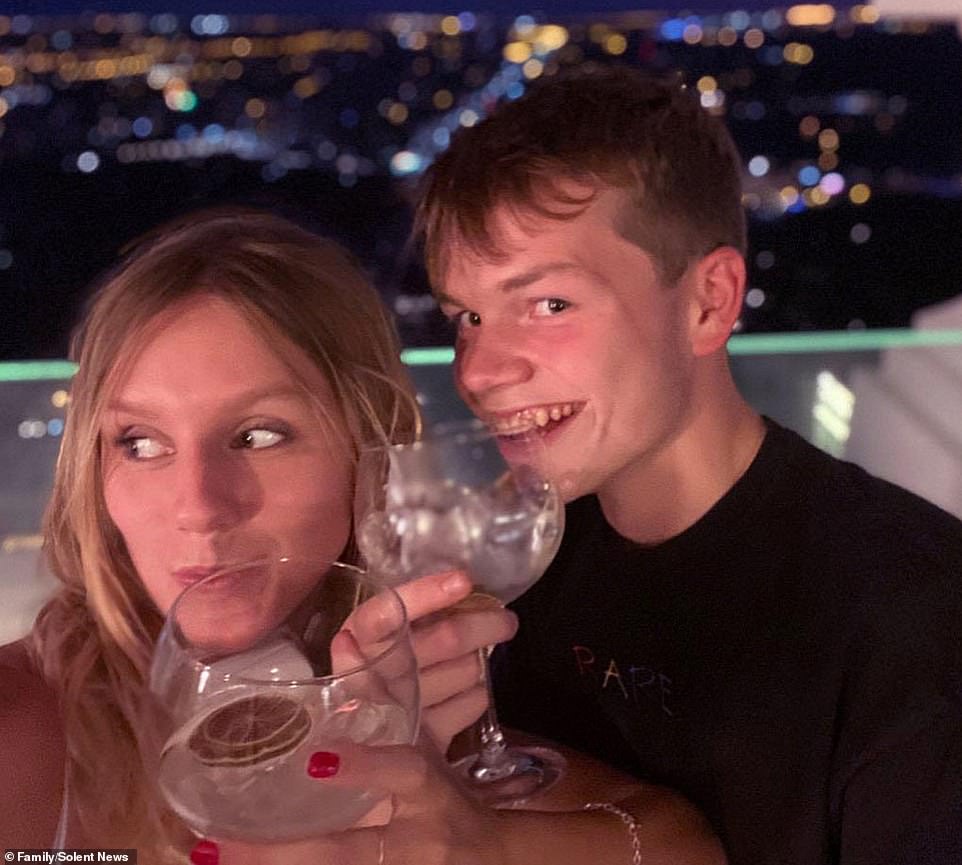 Mr Yaxley’s girlfriend, Miss Leatham, said she has ‘no memory of being on the wrong side of the road’ following the crash 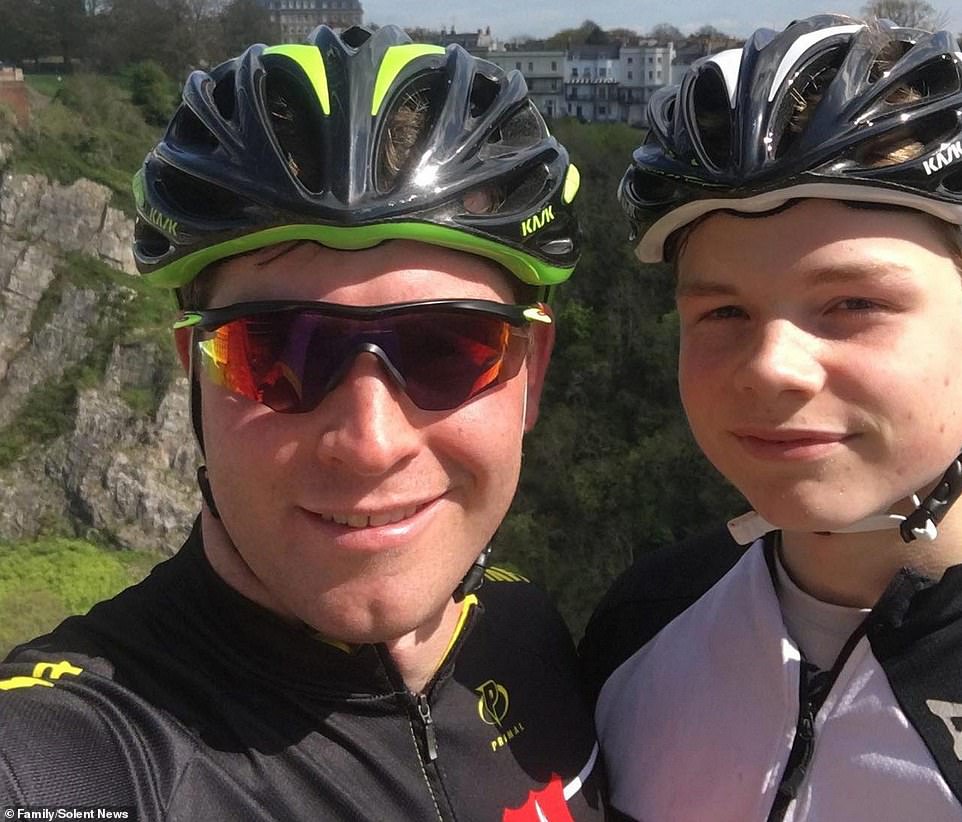 At Mr Yaxley’s inquest, his brother Tom (pictured together) told how his sibling became a mental health campaigner 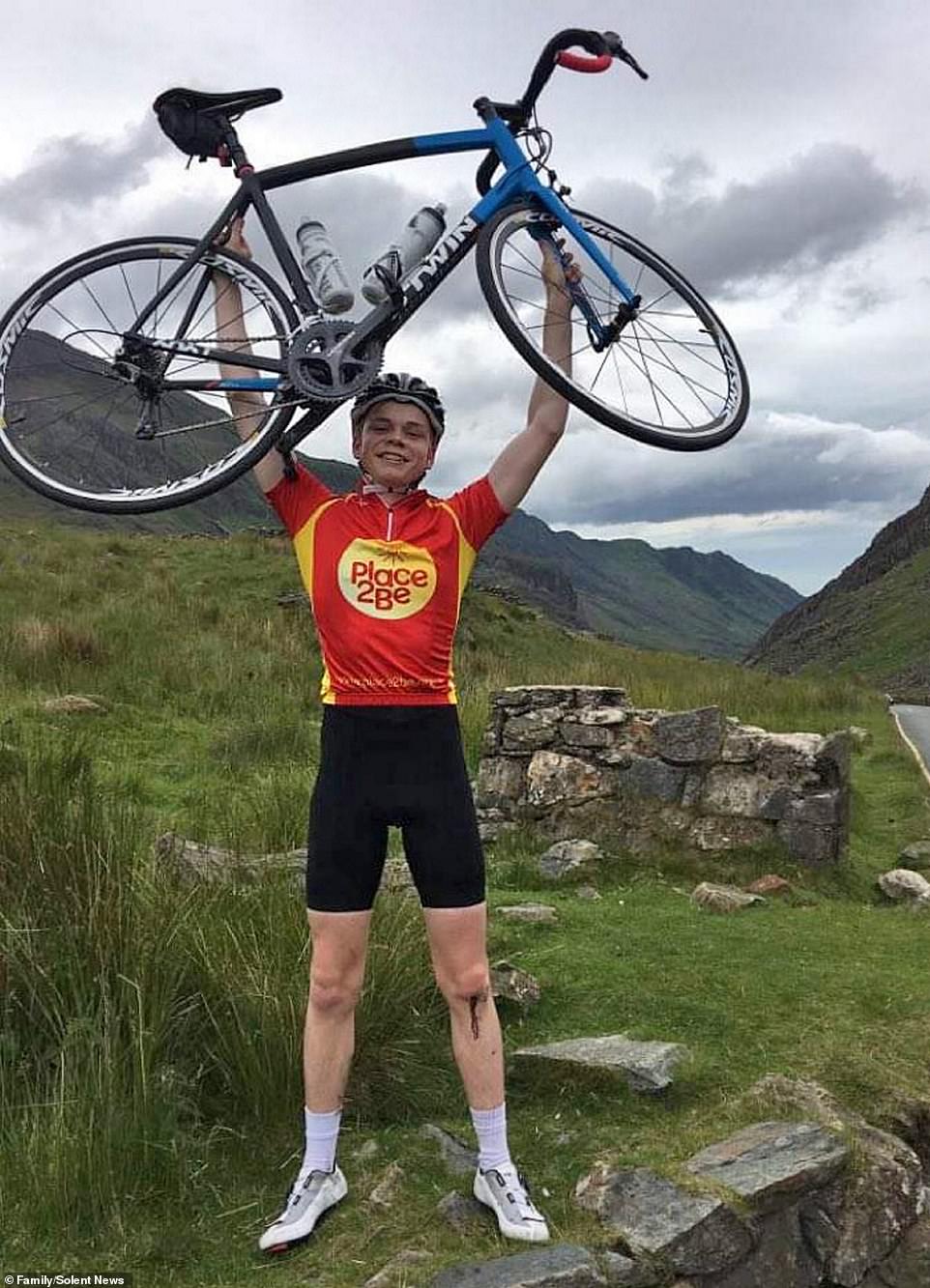 Since the death of Mr Yaxley, a cycling page has raised £16,000 for air ambulance and mental health charities

‘Hugo wasn’t an average young man. He had already been to hell and back as a teenager battling with depression, he had conquered it, not by ridding himself of it but by refusing to allow it to stop his stride. 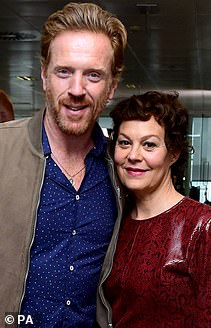 Damian Lewis and Helen McCrory in London in 2019

Helen McCrory was remembered by her husband Damian Lewis last month as ‘beautiful and mighty’ after her death from cancer at the age of 52.

The actress was best known for playing powerful women such as Shelby family matriarch Aunt Polly in the BBC gang drama Peaky Blinders, Narcissa Malfoy in the Harry Potter films and the home secretary in James Bond film Skyfall.

Lewis tweeted on April 16: ‘I’m heartbroken to announce that after an heroic battle with cancer, the beautiful and mighty woman that is Helen McCrory has died peacefully at home, surrounded by a wave of love from friends and family.

‘She died as she lived. Fearlessly. God we love her and know how lucky we are to have had her in our lives. She blazed so brightly. Go now Little One, into the air, and thank you.’

The actress also played Cherie Blair, wife of former prime minister Tony Blair, in both The Queen and The Special Relationship.

She was a regular figure in prestige TV dramas, including the ITV hit Quiz, the BBC political series Roadkill, psychological thriller MotherFatherSon and the adaptation of Philip Pullman’s His Dark Materials.

They starred together in the 2015 comedy Bill, about William Shakespeare, with McCrory in the role of Elizabeth I, after meeting while performing in Five Gold Rings at London’s Almeida Theatre.

The pair were also ambassadors for the Prince’s Trust. 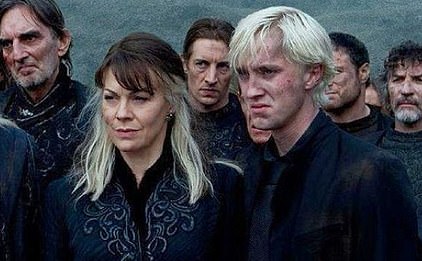 McCrory will be best remembered as the Malfoy matriarch, wife of Lucius Malfoy, mother of Draco Malfoy, in Harry Potter

McCrory’s break-out role was as Anna Karenina in the 2000 TV adaptation of the classic novel but to a generation of viewers she will be best remembered as the Malfoy matriarch, wife of Lucius Malfoy, mother of Draco Malfoy, in Harry Potter.

McCrory was born in Paddington, London, to a Welsh mother and Scottish-born father and was the eldest of three children.

She attended school in Hertfordshire, then spent a year living in Italy, before returning to London to study acting at the Drama Centre. She was made an OBE in the 2017 New Year Honours for services to drama.

‘His smile was huge and broad and contagious. We will keep him alive in our hearts forever but I’m so so sad l’ll never see it again.’

Lewis said: ‘The recurring theme talking to people about Hugo, is that, for one so young, he leaves an incredible legacy. He truly inspired people of his generation, through his own bravery, to be more confident and open about their mental health.

‘This is an extraordinary thing to have achieved by the age of 20. He’s touched more people in his short life than most do in their longer ones.

‘One great memory is of our family holiday in Mallorca when Hugo perfected and demonstrated (endlessly) the art of ‘bombing’ in the swimming pool. Face down mostly.

‘For ages afterwards, we called him Bomber Yaxley. He became many other fabulous things as he got older but that fearlessness never left him. And he used it to help others. Love you Hugo.’

At Mr Yaxley’s inquest, his brother Tom told how his sibling overcame depression and became a fierce mental health campaigner.

He said: ‘[Hugo was] friendly, kindhearted and gregarious. He always made time for others no matter what. He had depression but he was determined not to let it rule his life.

‘He had a plan to go and study in Spain at the University of Madrid. He was one of life’s good eggs and his cheeky smile will be missed by all that knew him.’

Tom added that his younger brother was a confident driver not known for speeding and had lots of experience driving in the area.

Mr Spreadbury, who was driving 47mph on the 60mph road, said: ‘As I was approaching the bend I saw a car coming towards me and saw the headlights.

‘The centre lines on the road were under the car, it was like it was cutting the bend and I thought the driver would correct it.

‘Inexplicably it quite deliberately cut across my lane and it was like the driver was moving towards me. The driver took no avoidable action.’

Coroner David Ridley disagreed with the suggestion that Mr Yaxley ‘deliberately’ veered towards Mr Spreadbury’s vehicle when he delivered his ruling.

Motorist Max Polinghorn, who was driving a Seat Ibiza, said when Mr Yaxley pulled up at traffic lights he was on the wrong side.

Mr Polinghorn repeatedly tried flashing his lights as he followed Mr Yaxley. ‘They just kept driving normally but on the wrong side of the road’, he said.

Mr Yaxley’s friend Charles Cooke, who was sat in the back, said: ‘Hugo has always been a safe driver, he’s aware of the highway code and well-educated.

He added that he ‘remembers Hugo panicking before the accident and said ‘shit’ but it was too late.’

Mr Yaxley’s girlfriend, Miss Leatham, said she has ‘no memory of being on the wrong side of the road’ and believes she was looking at her phone.

PC Robert Eccleston, of Wiltshire Police, said driving conditions were poor due to rain and darkness. He concluded ‘in my opinion the cause of the collision was driver error’.

Coroner David Ridley said it was like Hugo was ‘driving on the continent’, which he had no experience doing. He added: ‘For reasons that are unclear, he was driving on the wrong side of the highway ever since joining the road. 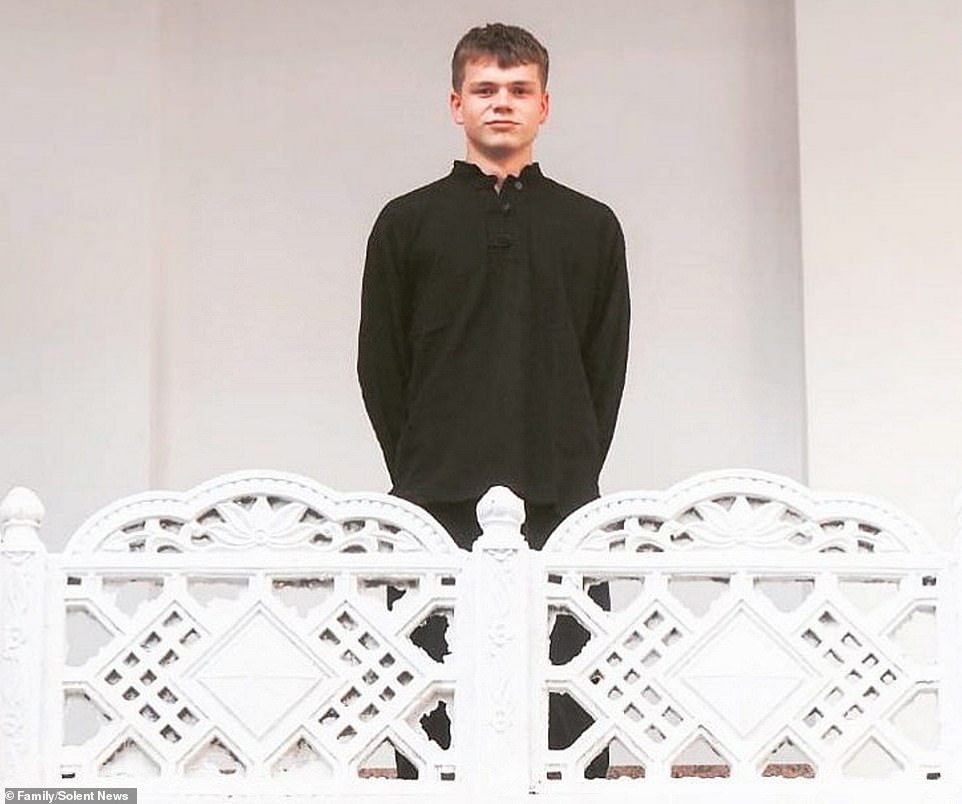 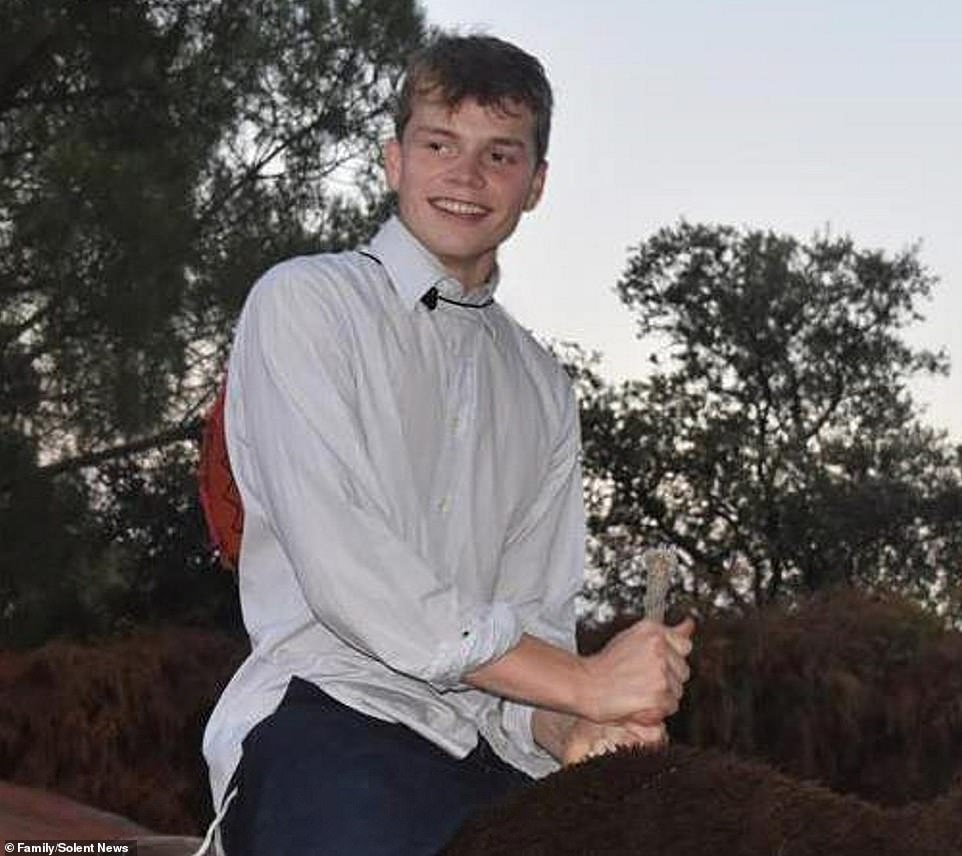 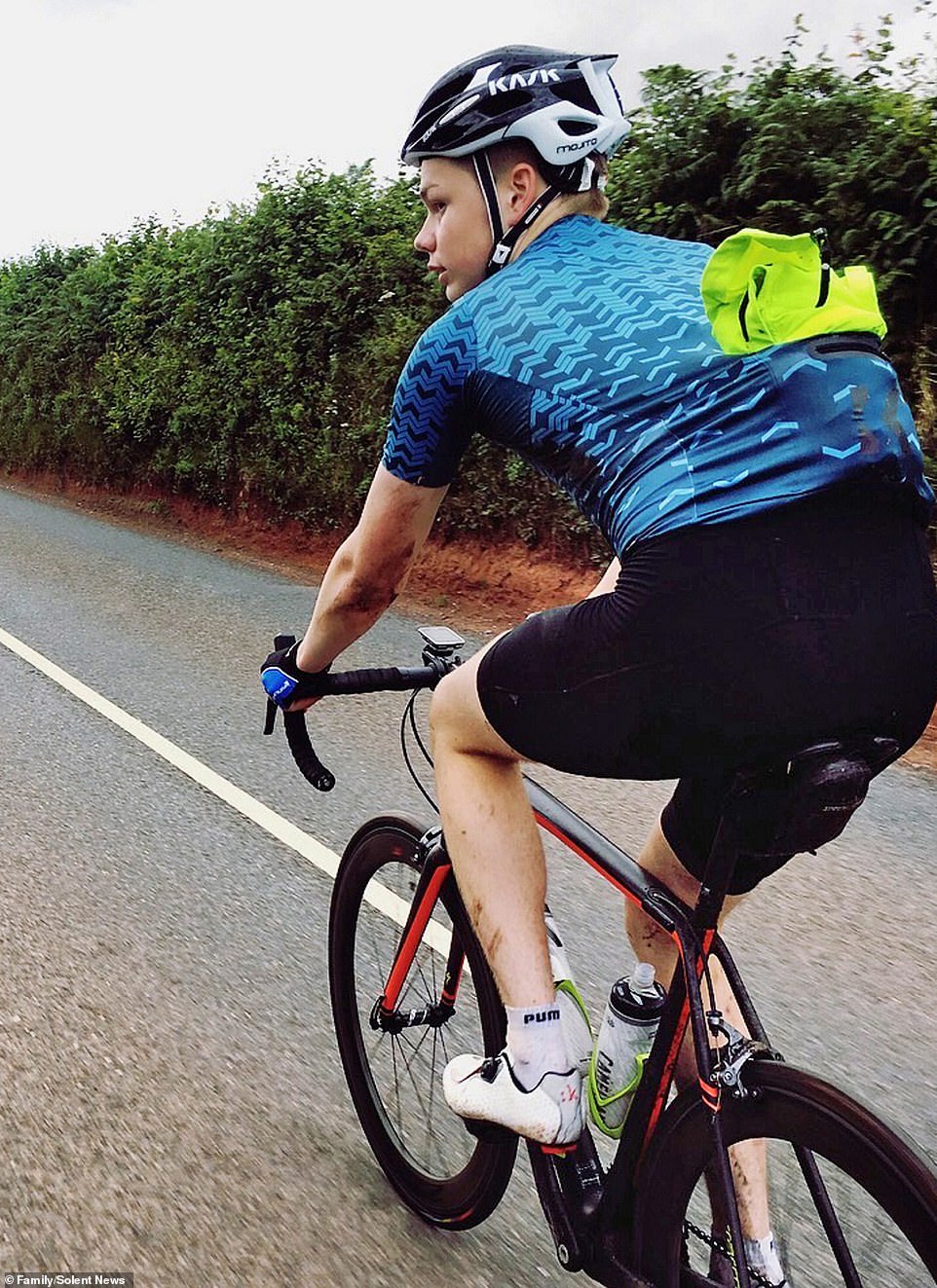 ‘Despite efforts to get his attention, they failed and sadly then there was the collision. As a consequence Hugo sustained injuries incompatible with life and was pronounced dead in the early hours of the following morning.’

Mr Ridley added: ‘Only Hugo can know why he was driving on the wrong side of the road.’

The coroner concluded that the death was caused by a road traffic collision.

Since the death of Mr Yaxley – a huge cycling fan – a cycling page set up in his honour has raised £16,000 for air ambulance and mental health charities while Miss Leatham has raised over £22,000.

Mr Yaxley’s family said he and McCrory will be ‘looking down on us all with love’.

They said in a statement: ‘There is no doubt though that Hugo will already have shown her [McCrory] the ropes, with the best places to have a drink and a cheeky rolly.

‘By God what a pair they will be making up there and we know that they will be looking down on us all with love and great pride.’