Rubber wheels. Electric batteries. No overhead wires. This could be the future for Melbourne’s trams.

By 2025, brand-new trams will be cruising through Melbourne’s streets, thanks to a $1.5 billion Andrews government injection to fund 100 “next-generation trams”. Nimble, low-floor and energy-efficient, the new vehicles will replace lumbering A and Z-Class trams built in the 1970s and 1980s. 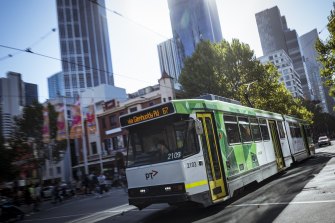 While much of the design work will be done during the upcoming tender process, some experts are calling for a radical transformation of Melbourne’s tram technology that will bring the city’s trams in line with China and Europe.

But others are calling for a measured approach, cautioning against reinventing the wheel on a system that has worked relatively well for over a century.

Smaller. At 25 metres long – about eight metres shorter than the newest E-Class trams – the next-generation trams will carry 150 passengers. This is fewer than the E-Class, which carry 210 people.

Despite the smaller size, seating will remain proportionally comparable with the E-Class, with 48 people or a third of passengers getting a seat on the new fleet.

When it comes to trams, size really does matter, with chronic overcrowding on busy routes creating a need for larger vehicles. (Bidders are being asked to provide an option for a 35-metre-long tram.)

But smaller-sized trams are being prioritised so they can run along tight curves on parts of the network that are inaccessible to E-Class trams. They will also be lighter, avoiding the need for expensive bridge strengthening works, which was required when the heavier E-Class trams were rolled out. 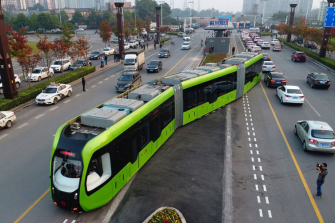 Tram rides will be smoother, thanks to new technology that helps avoid collisions via on-board cameras and network mapping that warns drivers of obstacles and can automatically apply brakes.

They will also be powered differently. Instead of relying on power from overhead wires, which are expensive to maintain and vulnerable to faults, the new fleet will be the first in Melbourne to be partly powered by on-board batteries.

They will be equipped with “regenerative braking technology”, which transfers the kinetic energy released by the tram’s brakes back into the tram’s battery, which then helps to power the tram. This will mean a 40 per cent drop in power usage, while there will also be a cap on the amount of energy the tram can draw from overhead lines. 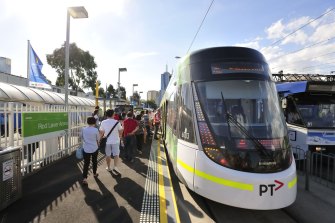 This is all about solving yet another problem that arose with E-Class trams: they used so much energy that new traction power substations were needed to power them.

While the trams’ size and technology can help smoothen a ride, this ultimately depends on the quality of track. And according to Monash University’s public transport chair Graham Currie, Melbourne’s ageing steel tracks “have poor rider quality”. Slips and falls on trams have increased in recent years.

“We have a big issue with tram track quality which needs a long-term solution,” Professor Currie said.

More hanging straps and hand rails are needed, said Public Transport Users Association spokesman Tony Morton. The lack of handles and grab rails causes commuters to crowd around tram doors, making it difficult for people to get on and off.

But above all else, Mr Leckey said the government must ensure all tram stops and trams are wheelchair-accessible — a project the Transport Department estimates would cost at least $2 billion. By the end of next year, all tram stops must be accessible under federal law. But only 23 per cent of stops are accessible today.

Funding to upgrade the network “slowed down to a trickle,” said Mr Leckey, who uses a wheelchair. “It means that me and so many other people who rely on wheelchair access or other mobility aids can’t use the trams,” he said.

They’re like electric buses, but better. So-called trackless trams, built and now operating in China, are battery-powered vehicles with rubber wheels that use sensors rather than steel tracks to run. New South Wales and WA governments are looking to roll these trams out, with the Morrison government putting $2 million into a business case for such trams in Perth.

Professor of Sustainability Peter Newman, who is leading research into these trams at Curtin University, said the vehicles can travel at high speeds while maintaining a ride so smooth that you could “put a cup of coffee on a table and it won’t move”.

They can be plonked onto the road network overnight for around $6 million to $8 million per kilometre, a fraction of the cost of light rail, Professor Newman said.

But the trams would be better suited in growth areas such as Wyndham, he said, while Professor Currie and Mr Morton said they would be best used plugging gaps in the bus network.

“This is a wheel we don’t need to reinvent,” Dr Morton said of Melbourne’s trams.

“As long as we have decent light rail infrastructure that has sufficient separation from traffic, accessibility built into stops and modern vehicles with good on-board information and all the safety features, that’s really the state of the art as far as getting people around on public transport goes.”

Our Morning Edition newsletter is a curated guide to the most important and interesting stories, analysis and insights. Sign up here.