As the unseasonal May rain lashes against his office window, Nadhim Zahawi bubbles with enthusiasm over the news from Government scientists: our vaccines work against the Indian variant of Covid.

Barring a sudden deterioration in the data, the country now looks on course to celebrate ‘freedom day’ on June 21, as planned.

The Vaccines Minister has proved to be one of the stars of the Government’s handling of the pandemic, quietly working 19-hour days to deliver a jabs roll-out matched by few other countries.

Voters are starting to notice.

With private polling putting his approval ratings above the Prime Minister and the Chancellor, Iraqi-born Mr Zahawi is being tipped for promotion to the Cabinet at the next reshuffle.

As well as the news that vaccines offer the same protection against ‘infection, transmission and hospitalisation’ involving the Indian variant as they do against the dominant Kent variant, Britain will today pass another major landmark of injecting a total of 60 million first and second doses of the vaccine. 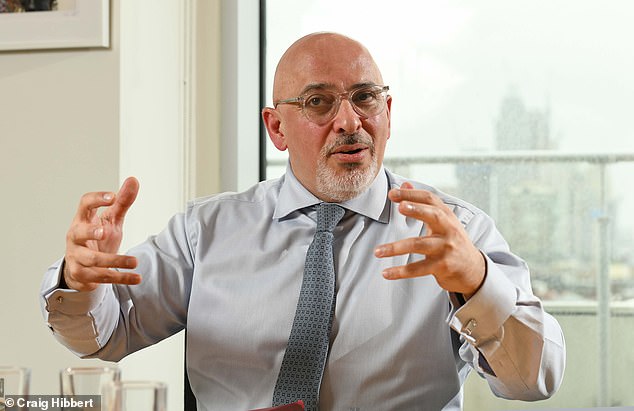 The Vaccines Minister has proved to be one of the stars of the Government’s handling of the pandemic, quietly working 19-hour days to deliver a jabs roll-out matched by few other countries

Mr Zahawi credits the achievement to the ‘Dunkirk spirit’ of the British people.

Experts have also concluded fears that the new variant could be as much as 50 per cent more contagious than the Kent one were overblown.

Mr Zahawi suggests it is a much more manageable 20 or 30 per cent.

Framed by sweeping views of a sodden London from the top floor of the Health Department, Mr Zahawi declares: ‘The vaccines already offer protection against the dominant Kent variant.

‘What scientists at Porton Down [the Government research centre] are now saying is that the double dose does the same thing against the Indian variant.

‘The important message is “get your second vaccine”, because if we can get people double-vaccinated rapidly then this is going to be manageable.’

Mr Zahawi, 53, admits to being initially alarmed by the spread of the Indian variant, particularly in the hotspots of Blackburn and Bolton, and the threat it posed to the Prime Minister’s roadmap out of lockdown.

Now he is ‘cautiously optimistic’ that Boris Johnson will be able to announce on June 14 the end of social distancing a week later. 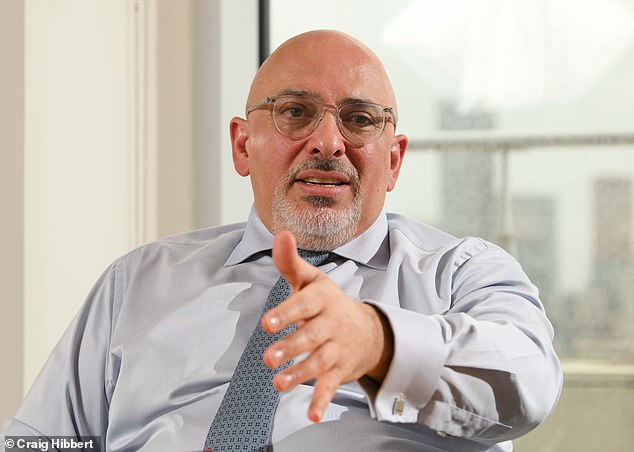 Mr Zahawi, who arrived in the UK aged 11 and unable to speak English, addresses head-on the problem of ‘vaccine hesitancy’ in ethnic minority communities

Mr Zahawi, who arrived in the UK aged 11 and unable to speak English, addresses head-on the problem of ‘vaccine hesitancy’ in ethnic minority communities.

But buoyed by a five-fold increase in uptake among Bangladeshis following a concerted push to target them, he says: ‘Now we are looking at doing the same thing in those postcodes where we see lower uptake, especially among different communities.’

He also says it is ‘looking better’ in the hotspots after weeks of surge testing and vaccination drives in the areas of lowest take-up.

Once every adult over 18 has been offered the vaccine by the end of July, the Government’s efforts will switch to ‘managing’ the virus.

‘All of these are part of the foundations we’re laying so that we’re in a place where we are able to manage it as we would manage flu next year,’ Mr Zahawi said.

‘We’ve probably got one of the best detection systems now in the world in terms of geographical coverage.

Seventy per cent of waste water in the country now gets effectively analysed so we can see how this virus is behaving.’

However successful the vaccination drive has been, the Minister explains that even the double-vaccinated can’t escape the dreaded ‘ping’ from the NHS Covid app, telling them to self-isolate if they have been in contact with someone who has tested positive.

Why? Because those people can still spread the virus even if they’re protected from serious illness by the vaccines. 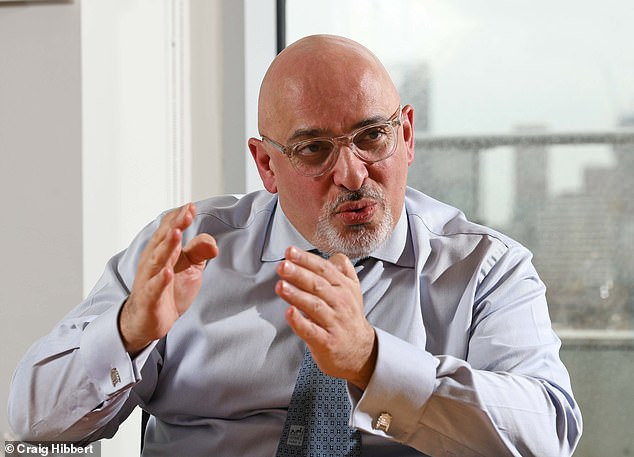 With private polling putting his approval ratings above the Prime Minister and the Chancellor, Iraqi-born Mr Zahawi is being tipped for promotion to the Cabinet at the next reshuffle

‘Even if you’ve had both jabs, whether it’s Pfizer or AstraZeneca – and I have recently had it in my own family – you can still get infected,’ he explains.

‘The vaccines protect you, but you might still get the virus and transmit it.’

Mr Zahawi was already a well-known figure at Westminster as a Business Minister before Boris Johnson picked him for the high-profile role of running the vaccines programme last November.

He appears non-plussed when asked why he was chosen, suggesting it may be because PM knew he had a track record as a ‘deliverer’ in his previous business career, including co-founding polling firm YouGov.

That has made him one of the wealthiest MPs in the Commons, and was part of a varied business career that also once saw him selling Teletubbies merchandise – ‘T-shirts and pyjamas’ – to Marks & Spencer.

But it was his polling firm which first put him on Mr Johnson’s radar, when the PM was editor of The Spectator magazine.

‘When Saddam Hussein’s statue fell, we got a phone call from Boris saying, “Can you do a survey of Baghdadis? I want to know what they think.” ’

It led to Mr Zahawi heading back to the country of his birth ‘via Kuwait’ to make polling history by conducting the first ‘piece of proper research among Baghdadis’.

Did he have any hesitation when Mr Johnson asked him to take on the vaccines role?

‘I couldn’t say no because in many ways… this is the equivalent of the Second World War,’ he says. ‘Our country has been hit by this extraordinary invisible enemy.’

Mr Zahawi betrays just a hint of emotion as he explains he is also giving something back to the country which gave his family sanctuary.

‘My family came here in 1978. I couldn’t speak a word of English when I arrived on these shores. The teacher thought I had learning difficulties because I was a proud kid.

‘I sat in the back of the class, trying to string words together in my head, to join in, but by the time I had made the sentence up, the subject matter had moved on.

‘But within eight months, I picked up the language, as kids do.

‘And then you find this country is the best country because when you share your aspirations and your hopes and your dreams with people, they’ll help you.’

Mr Zahawi’s public face during the vaccine drive has been one of cheery optimism.

But he freely admits to moments of fear ‘all the time, all the time’. At moments, he even asked himself: ‘What if it [the vaccine] doesn’t work? We’ve got to be ready. Imagine a world where the variant was more lethal.’

Entering the lion’s den – for a Conservative Minister – of BBC1’s Question Time last week, Mr Zahawi came in for a mauling over foreign travel rules.

The Government has been accused of sowing confusion and chaos by not making clear that people should only be travelling to ‘amber-list’ countries in exceptional circumstances – not for holidays, which are reserved for ‘green-list’ destinations such as Portugal.

Mr Zahawi rejects the ‘chaos’ criticism, suggesting the British public understood the rules. ‘This is an abnormal year,’ he says.

‘And I think actually people understand that. Now, you need to have a system in place that looks at infection rates, vaccination rates, variants…

‘So the green list is limited at the moment. But I think it’s the right thing to place most countries on the amber list or obviously the ones of real concern on the red list.’

As for himself, ‘I haven’t yet decided to go on holiday. I would enjoy one, but until I complete this target, I just wouldn’t feel right’.

That target is the Government’s stated aim of vaccinating every adult by the end of July.

Despite supply problems – including five million AstraZeneca doses from India’s Serum Institute, which will now not arrive this year – he insists that goal will be met, thanks to most people’s willingness to be vaccinated.

‘It’s because actually the British people get it, he says. ‘It’s that Dunkirk spirit.’

His Tory MP colleagues may speculate that a Cabinet promotion awaits but, for now, Mr Zahawi wants to get the vaccine drive done – working towards his dream of a world where one day, a Government vaccines tsar will no longer be necessary.,

‘I’d like to put myself out of a job, if that’s what you mean,’ he laughs before adding – not for the first time – that this will be a long battle, not least because as well as Covid, the Government is guarding against a flu epidemic this winter.

‘It’s really important that we protect against both Covid and flu,’ he says.

‘The worst of all worlds is you think you’ve done really well on Covid and then you get blindsided by a really bad flu season for the NHS. We will have to live with this virus.’