A topless man was filmed boasting ‘this isn’t my first rodeo’ to police before mooning after a frustrated farmer used a tractor to tip his car over a wall.

Video posted online yesterday showed the man kicking the farmer’s tractor as he flipped the Vauxhall hatchback onto its side before dumping the vehicle down a country road after being ‘driven mad’ by local thugs.

New footage that emerged today shows the same man talking to two officers who had arrived at the scene following the incident at around 5pm on Saturday.

At one point he says ‘f*****g farmers’ as he pulls down his trousers and exposing his backside to the camera.

The confrontation took place on a track leading to Brockersgill Farm near Barnard Castle in County Durham, which is run by Robert Hooper, 57. However, it is not clear if Mr Hooper was the tractor driver and he refused to comment yesterday.

Today’s footage is the later stages of a Snapchat video posted by a man called Elliott Johnson, who included a caption calling the hatchback his ‘courtesy car’. But it was not clear whether he was the shirtless man seen in the film and there is no suggestion he was involved in anti-social behaviour. 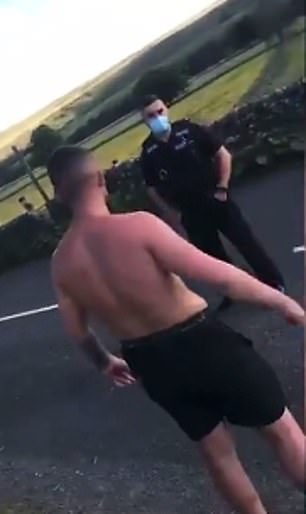 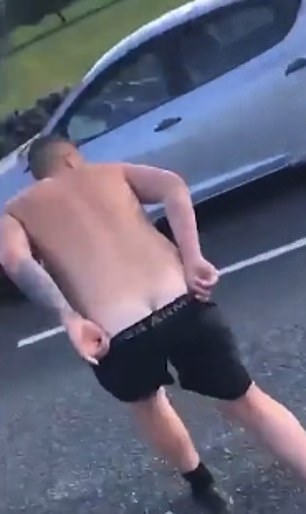 Video posted online yesterday showed the man kicking the farmer’s tractor as he flipped the Vauxhall hatchback onto its side. New footage that emerged today shows the same man talking to two officers who had arrived at the scene (left). At one point he moons at the camera (right)

In yesterday’s video, the tractor driver can be seen checking to see if any other traffic was coming before pushing the hatchback down the country lane.

He appeared to knock the car driver to the ground as he swung back round to return to his farm, leaving the road littered with glass and debris.

A source told MailOnline that the tractor was driven by a farmer who was angry at local ‘ruffians’ parking their car in his drive.

‘The lads had parked their car onto his drive,’ the source said. ‘He asked them to move but they didn’t seem to want to obey.

‘He had no choice but to take matters into his own hands and remove the ruffians from his property himself.’

Friend Mark Nicholson said the farmer had been ‘driven mad by these lot’ with anti-social behaviour leaving him at ‘the end of his tether’.

Durham Constabulary confirmed they had been called out to the incident just after 5pm on Saturday. 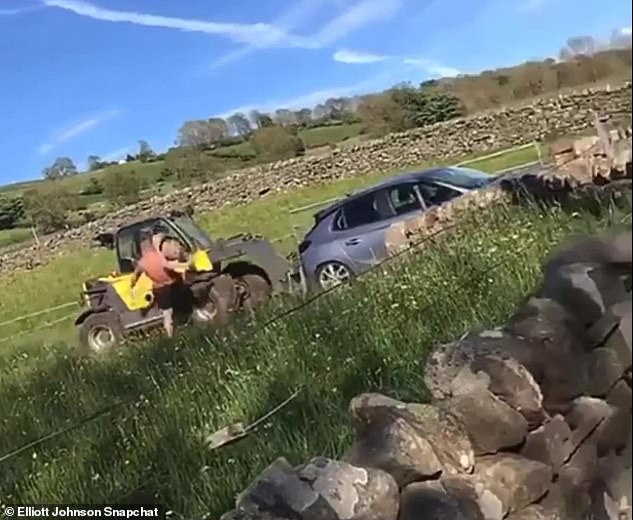 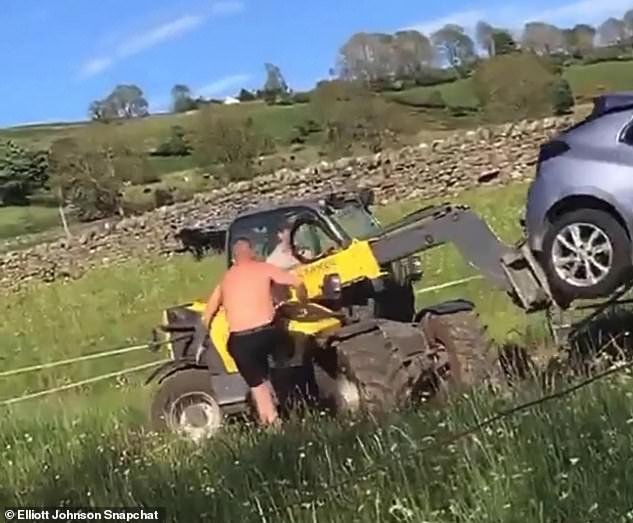 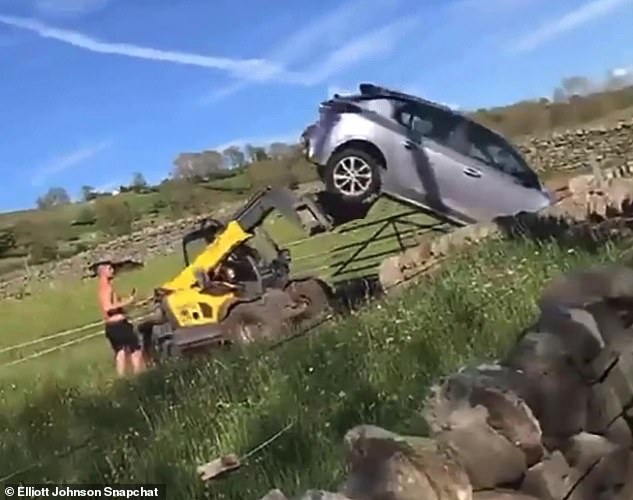 A police spokesman told MailOnline: ‘We were alerted to reports of an incident at a farm in the Teesdale area shortly after 5.45pm on June 5.

‘Officers attended the scene and an investigation into the circumstances is ongoing.’

It is understood that no arrests have been made over the shocking fracas.

There were further claims yesterday the farmer may have been the victim of repeated anti-social behaviour.

It was said the youths had subjected him to fires on his land as well as property damaged.

Dairy farmer Mark Nicholson said: ‘A lot more to this story, he’s a friend of a colleague, he’s been driven mad by these lot, starting fires, pushing walls over just to name a few things, not saying it’s right but they pushed him to the end of his tether.’

Charlie Finnerty, of Rochdale, Gtr Mancs also posted the video yesterday on Sunday on Facebook and it has already racked up over one million views.

‘Motorist has smartphone. Farmer has forklift. Who’s gonna win this one?’

He said: ‘Wow, don’t park in front of farmer’s gates.’

However, the farmer’s actions divided opinions. 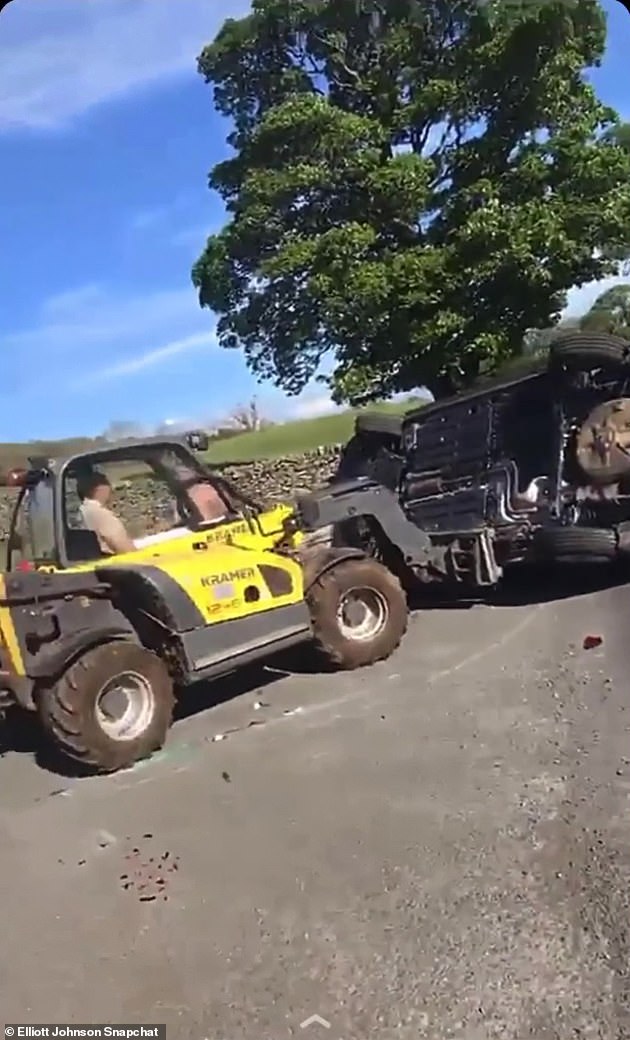 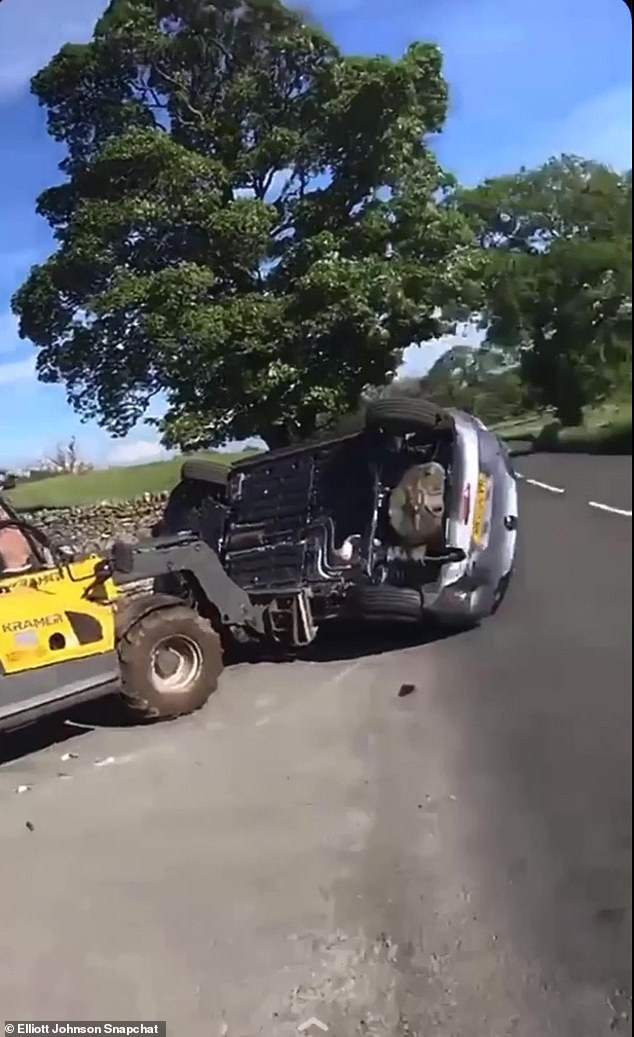 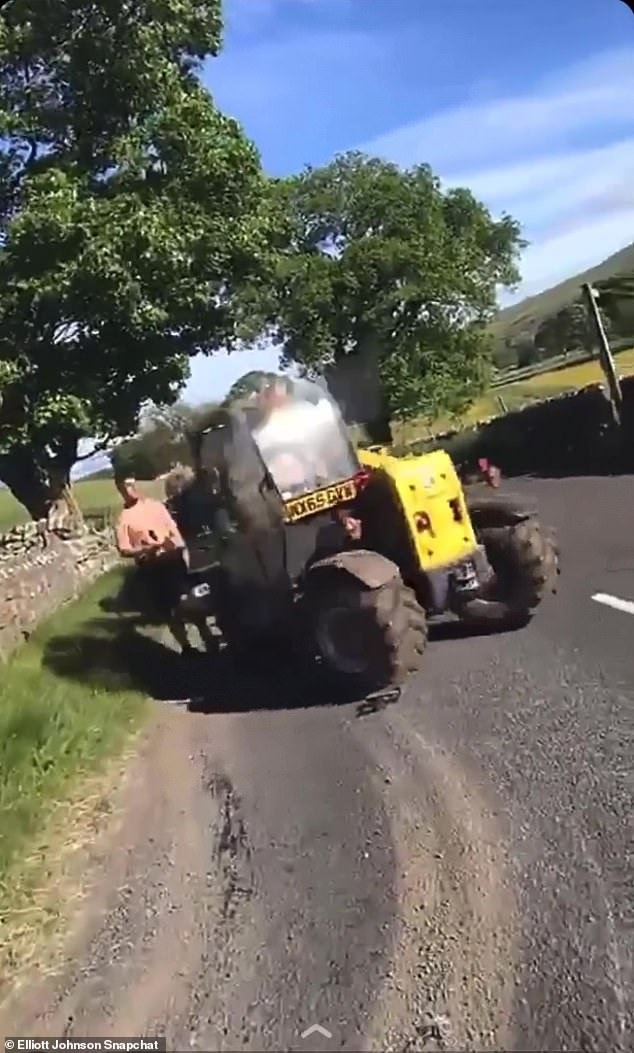 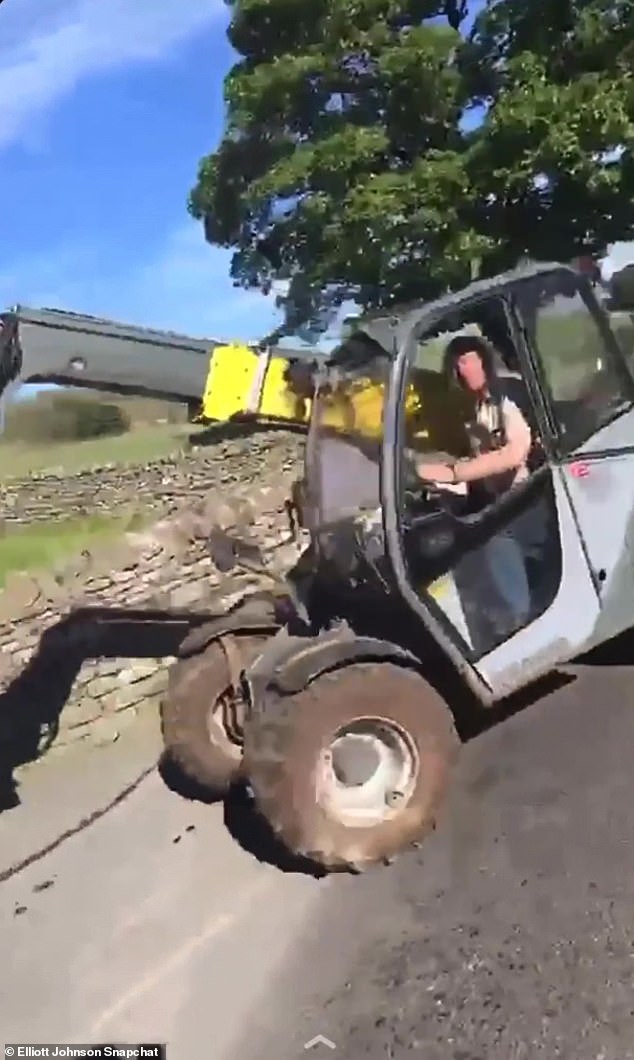 The lifter driver then calmly went back to the land, leaving the car in the middle of the road

Mary Harris joked: ‘I love the way the farmer looks right to check no oncoming vehicles before pulling out.’

Mike Hillen said: ‘There was an easier solution to this, farmer should have chained and padlocked his gate closed.

‘Stopping the car from leaving then waited for car owner to knock on his door, he could of then charged him whatever amount to open the gate.

‘No court, no lawyer bills.’

Thomas Williams added: ‘As satisfying as it is to see someone who is clearly pondlife get his just desserts.

‘This is definitely criminal damage and perhaps even GBH when he hits him with the vehicle.’

But one cyclist – called Hannah – said: ‘I fully condone this.

‘Well done farmer for getting rid of this car in front of his gate.’