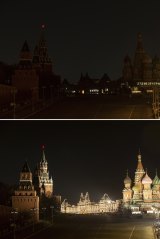 Before and after: The Kremlin and Red Square in Moscow turn out the lights for Earth Hour. Credit:AP

Canberra: Despite coronavirus restrictions, Earth Hour has taken place across the world, starting from New Zealand, followed by Fiji and Australia, with lights switched off on famous buildings and regular homes to boost awareness of climate change.

The initiative, started by environmental group the WWF in 2007, asks people, companies and local authorities to turn off lights for one hour from 8.30pm local time in their town or city.

In Australia, Sydney Opera House and Harbour Bridge both turned their lights off. Melbourne's Luna Park, Brisbane's The Wheel, and Perth's Bell Tower also switched off.

Coincidentally, lockdowns across the globe have led to a reduction in pollution.

Photos and videos were shared on social media, but the buzz was somewhat dampened by the coronavirus pandemic-ensued lockdowns.

WWF-Australia hosted a live-stream on YouTube and various other social media platforms in which Australian comedians and artists, including Cody Simpson and Montaigne, performed from their own homes.

"Staying connected as a community and looking for positive ways we can contribute is more important than ever as the world responds to the coronavirus crisis," said WWF-Australia's chief executive Dermot O'Gorman.

Organisers decided to go ahead with the Earth Hour despite the world being in such flux due to the coronavirus pandemic. However, all the official public events were canceled to prioritise community safety rules.

In order to comply with lockdown restrictions, the WWF has suggested activities at home, such as playing games by candlelight. 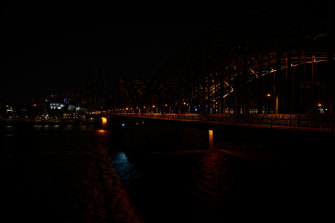 More than 100 landmarks from across the world will switch off to show their support for Earth Hour.

They include the Eiffel Tower in Paris, Sheikh Zayed Grand Mosque in Abu Dhabi, Tokyo's Skytree, Brandenburg Gate in Berlin, the Colosseum in Rome and the Petronas Twin Towers in Kuala Lumpur, among others.