Johnny Depp testified this week in his defamation case against Amber Heard, accusing the actress of emotional and physical abuse during their four-year relationship. It's been wild, to say the least.

In one shocking moment, the Aquaman star, who has yet to take the stand, berated and admitted to "hitting" Depp in an audio recording played to the court. Photos were shown of injuries Depp purportedly sustained after violent fights. But there were several uncomfortable moments for the Pirates of the Caribbean star, too. During cross-examination, Depp was faced with aggressive secret recordings taken by Heard. The jury also heard many of the actor's explicit text messages, where he called Heard things like "worthless hooker" and "c***," and said he wants to "f*** her burnt corpse."

The trial is expected to last several more weeks. While Heard has yet to testify, legal experts believe Depp, so far, is "winning in the court of public opinion." 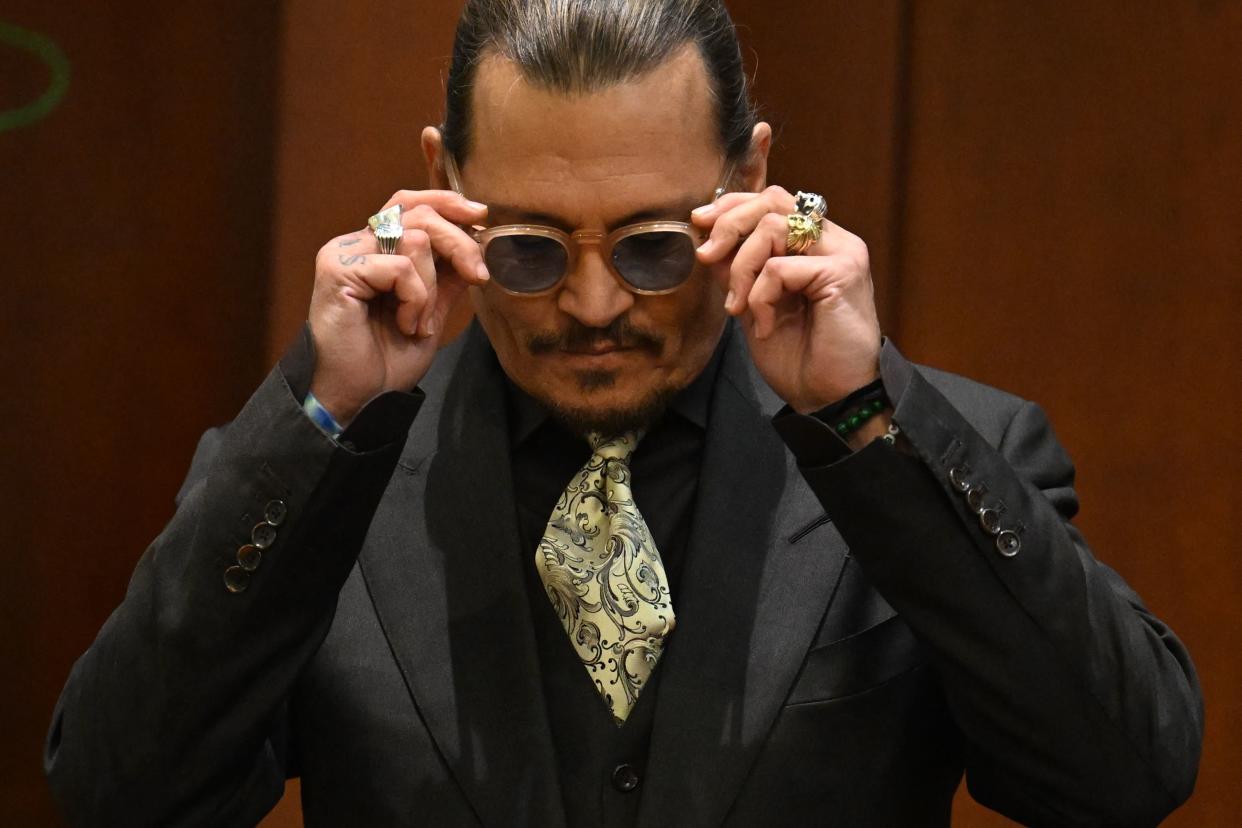 "Johnny has demonstrated that Amber was the dominant aggressor in the relationship which included acts of physical violence against him. He described how she threw a bottle of vodka at him which severed the tip of his finger, that she snubbed out a lit cigarette on his face and punched him in the face. He showed photographs of these injuries," family attorney Chris Melcher, a partner of Walzer Melcher, tells Yahoo Entertainment. (Heard maintains it was Depp who cut off the tip of his finger.) "But the case is not about whether Amber hit Johnny."

Depp is suing Heard for defamation for describing herself as a "public figure representing domestic abuse" in a 2018 op-ed for the Washington Post. He is not suing her for assault.

"Johnny needs to prove that she made a false statement about him in the Washington Post piece. He did not do a good job pointing out specific statements in the article that he believes are false," Melcher continues. "Amber did not directly say in the article that Johnny hit her. She portrayed herself as a victim of domestic violence and claimed that she faced backlash when she spoke up about it. Amber placed herself in a false light but that may not be enough to count as defamation."

Depp lost a similar libel case in the U.K. in 2020, when a judge ruled it was "substantially true" the actor abused Heard, therefore it was fair for The Sun to refer to him as a "wife beater." The three-week trial was equally as explosive, but Melcher notes there is a key difference.

"The case against The Sun did not involve Amber as a party, she was a witness only, so he was unable to go into depth as to her conduct at that trial as he is able to do now. Johnny explained that he lost his reputation immediately because Amber's accusations created a firestorm of media attention, and that he was advised by his counsel at the time not to fight back," Melcher says. "It is a difficult situation for any public figure to deal with accusations like that, with their counsel advising them to remain silent while the accusations circulate in the media. Six years later, he is finally speaking out in a courtroom with evidence and demonstrating that these allegations are false."

Melcher adds, "Johnny is winning in the court of public opinion, even if he loses in the court of Virginia. He must know the chances of winning the defamation case is difficult, and is probably using this case as a forum to expose what Amber did to him. This is the first opportunity he has had to put Amber on trial."

Defamation lawyer Jeff Lewis agrees, telling Yahoo Entertainment, "For Amber, this trial certainly isn't helping… She's not coming out looking like an angel and let's face it, women are judged harsher in Hollywood." 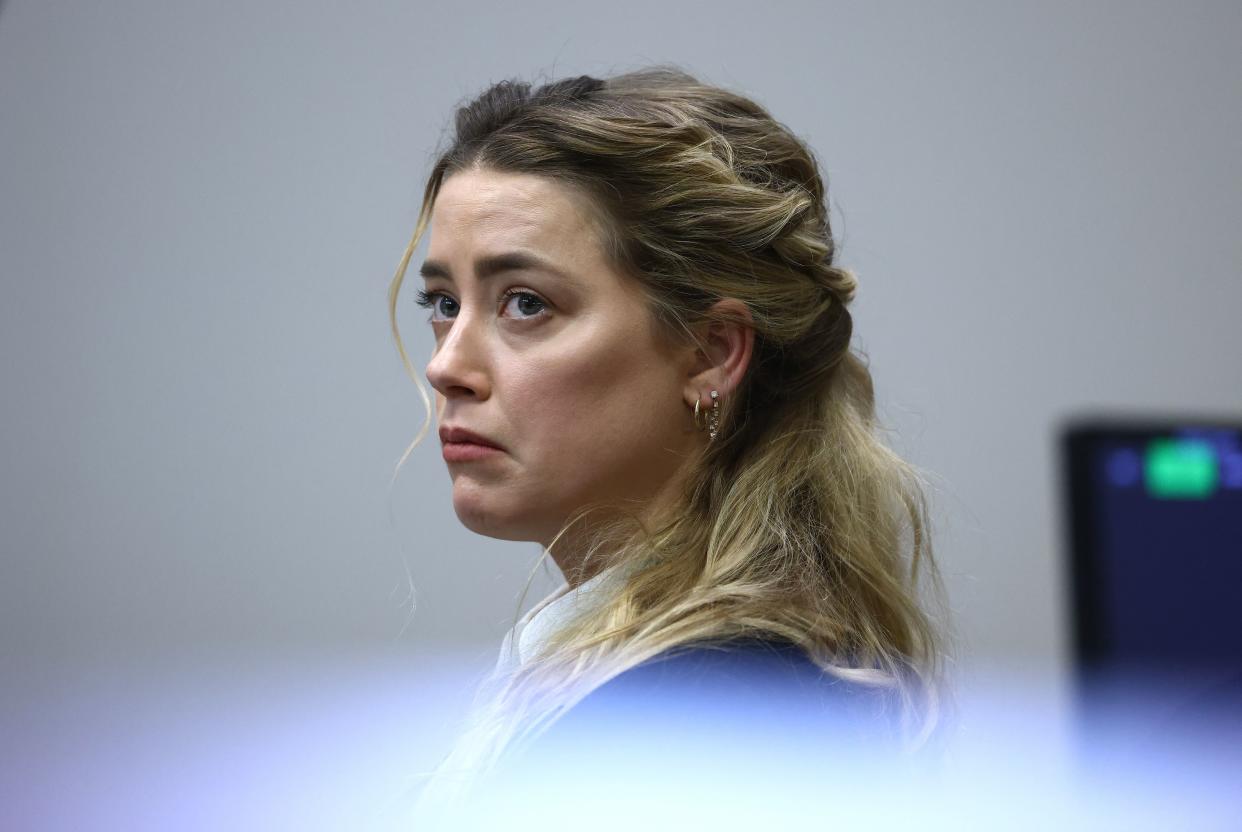 "Johnny's reputation as a bad-boy and partier actually helps him. His drug use is widely known so it's not like his testimony took anyone by surprise. What may not have been as widely known is the abusive childhood and environment Johnny grew up in. This allowed him to be portrayed as a victim and endear himself to the public and maybe even to the jury," Lewis adds. "But we've got a long way to go. Amber hasn't told her side of the story and, let's keep in mind, both of them are actors and you would expect them to star in their current role of witness."

A source close to Heard disagrees with how Depp came a cross on the stand, telling Yahoo Entertainment the actor contradicted himself multiple times, especially when it came to his substance abuse issues. The insider emphasizes that the actor has to prove by preponderance of the evidence that he did not abuse Heard in the defamation case and doesn't believe the case was made. That will be up to the jury to decide.

Melcher believes Depp did well during cross-examination in comparison to his first day testifying and appeared "more comfortable." He also points out the actor's testimony about his childhood.

"Johnny did a great job explaining how he suffered abuse as a child by his mother and that he withdrew and started using drugs at a young age as a result. It was heart-wrenching to hear how poorly he was treated by his parents and how that led him to self-medicate with drugs at an early age because he had no other way of coping. This was vital testimony to show that Johnny used drugs to numb his pain, rather than to party," Melcher says. "It also demonstrated that Johnny withdraws from conflict because that is what he learned as a child. The jury must have tremendous sympathy for Johnny, but ultimately they are expected to follow the law in making their decision."

As for the defamation case at hand, Depp has an uphill battle.

"He has to prove actual malice to win a defamation lawsuit. That's a much more difficult hurdle to climb than when suing someone who is not a public figure. Depp must prove that Heard knew her statements were false when she made them," says Lewis.

Depp's career could get a lifeline, though.

"This is a lose-lose situation for both but I think Johnny comes out looking better and social media comments kind of reflect that," he adds. "Also, remember Hollywood has a short memory. Remember when Robert Downey Jr.'s career was in the tank after his substance abuse, bizarre behavior and breaking into someone's home? He has fully overcome that phase of his life and Depp could do the same, especially with a win here."