Dee Ken has been waiting 30 “spooky” days for one of her favourite events of the year.

Since October 1, Ken has been showing off her “Spooktacular Haunted House” in Hoppers Crossing, famous in her neighbourhood for a front yard of skeletons, witches, zombies, giant spiders and cauldrons. The house even has its own Facebook page. 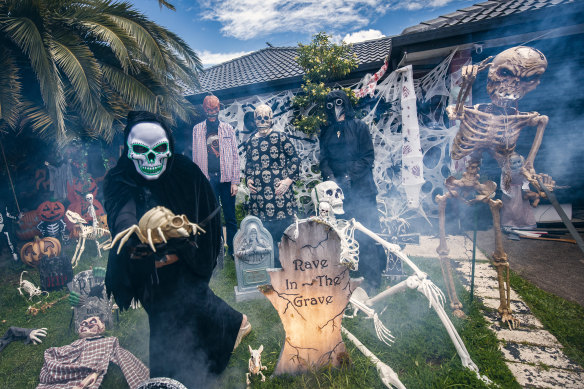 Dee Ken (in white and green mask) with Ayden, Keira and Zoe with their Halloween decorations at their Hoppers Crossing home.Credit:Scott McNaughton

Dee’s Halloween set-ups take months of planning, and she has spent thousands of dollars on decorations over more than a decade as the day has become increasingly popular in Australia.

She will invite dozens of trick-or-treaters to view her elaborate decorations on Monday. “I’m already thinking about what I’ll do next year.“

Despite grinches who decry the occasion as an imported Americanism (the Celtic tradition was brought to the United States in the 1840s by Irish immigrants), Halloween has taken root in Australia.

Its popularity is evident in the number of decorated homes, like Ken’s, and in data provided by major retailers who say it is now one of the biggest spending events of the year, despite rampant inflation.

Roy Morgan research released this month found one in four Australians surveyed planned to celebrate Halloween, and retailers expected to bring in a combined $430 million in Halloween spending this year (an average of $86 per person).

Demand for Halloween products at Woolworths has grown by 30 per cent across the past five years, according to a spokesperson. Big W’s Halloween sales have doubled in the same period — the retailer has doubled the floor space dedicated to selling costumes, toys and decorations.

Kmart says Halloween is now one of its “fastest-growing events of the year”.

Anita Williams, marketing manager at Australian retailer costumes.com.au, said Halloween sales were up on last year for costumes and decor in Melbourne, with in-person events and parties driving demand.

“A lot of the event managers and people we speak to are saying, ‘we’re going full steam ahead this year’, whereas this time last year we had people saying ‘it’s all too hard [due to COVID-19 restrictions]’,” she said.

Serious Halloween lovers started purchasing decor and decorations in July, she said, including animated props as tall as three metres and costing up to $900.

“People who are decking out their house are planners,” she said. “They want the best house on the street.”

Olav Muurlink, Associate Professor of Sustainable Innovation at Central Queensland University, said the increasing commercialisation of Halloween in Australia was the “perfect” marketing event for retailers because it involved children, making it “hard for parents to resist”. This year, it was also perfectly timed before the Melbourne Cup public holiday. 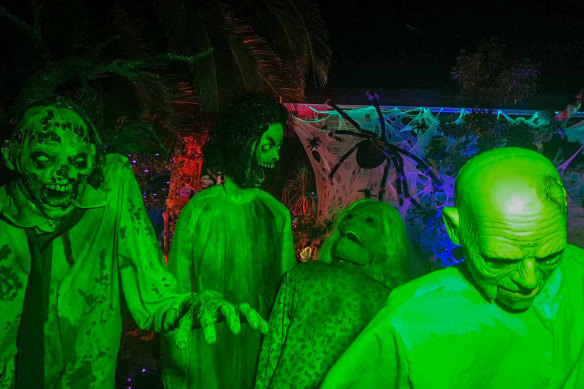 “Eighty-three per cent of Halloween costumes are made in part with oil-based plastics and rubberised plastics, which are by their very nature almost impossible to recycle, so they end up in landfill,” he said. 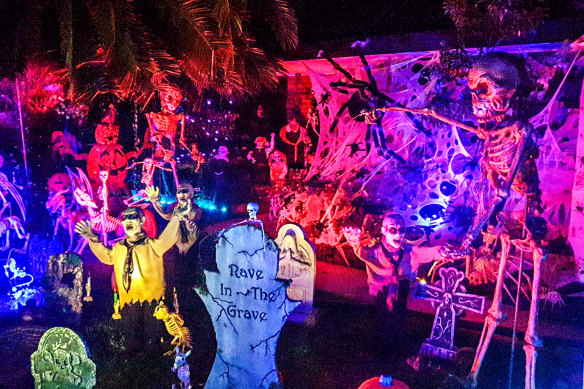 “The last few years has been limited because I’ve been buying for so many years and the price of everything going up, so I’m very selective now about the items I choose.”

Brigette Smith, a 31-year-old single mother of two in Brunswick, said the crafty aspects of Halloween were more important than buying new things.

“It’s something that we can do together as a family,” she said of making jack-o-lanterns, spiderwebs and other projects with her children, as well as op-shopping to find unique treasures to add to their decorations.

“I’m not the type to get rid of things, so we’ve got a zombie I bought six years ago that we still use.”