Germany has recorded its biggest daily jump in coronavirus deaths after 128 more people were added to the death toll today.

The dozens of new deaths announced by the Robert Koch Institute bring the tally from 455 to 583, an increase of more than 28 per cent.

It also brings Germany’s mortality rate up to 0.9 per cent – still lower than most of its European neighbours, but up from 0.4 per cent a week ago. 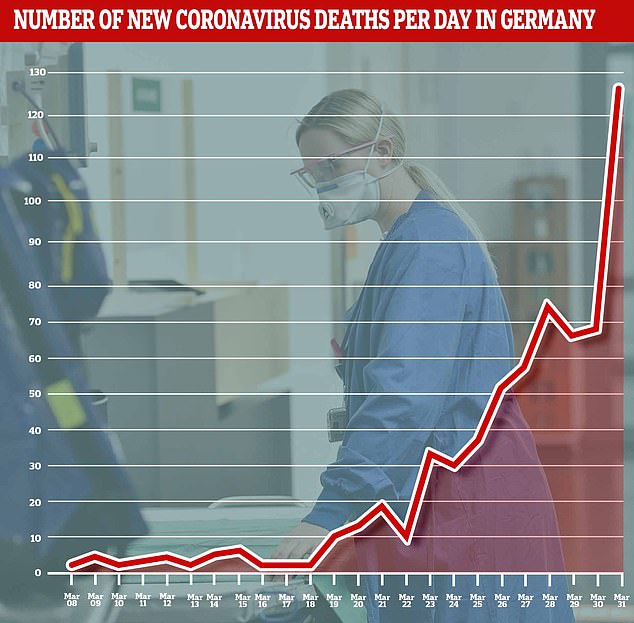 This graph shows how Germany’s daily death count has jumped today, reaching 128 and bringing the country’s death toll from 455 to 583 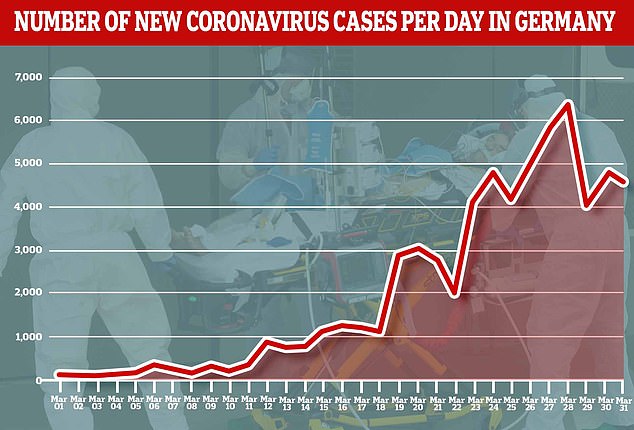 This graph shows the daily number of reported infections. The total number of cases in Germany rose by 4,615, bringing the total from 57,298 to 61,913 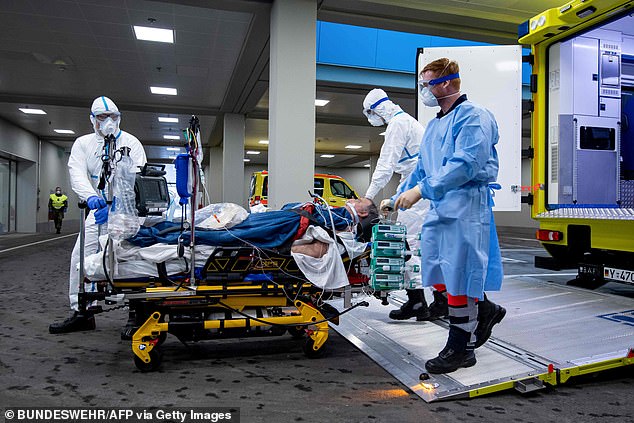 Medical staff transporting a French patient from an ambulance to the intensive care ward of a military hospital in Ulm, south-western Germany

The southern states of Bavaria and Baden-Wuerttemberg – the closest states to Italy – have recorded the most deaths, with a combined 327 out of Germany’s 583.

There are also clusters in the populous western state of North Rhine-Westphalia and in the cities of Hamburg and Berlin.

More than 2,500 people have been infected in the capital, including 13 deaths.

According to German media, the dead also include 17 people at a retirement home in Wolfsburg.

Around half of the care home’s residents have reportedly been infected with the disease, which is more dangerous to older people.

The low rate in Germany is thought to be linked to widespread testing, meaning many people with mild symptoms have been added to the tally.

Germany also has more intensive care facilities than many of its neighbours, and the average confirmed patient has been younger than in Italy.

However, the rate has increased noticeably, from 0.2 per cent on March 20 to 0.9 per cent today. 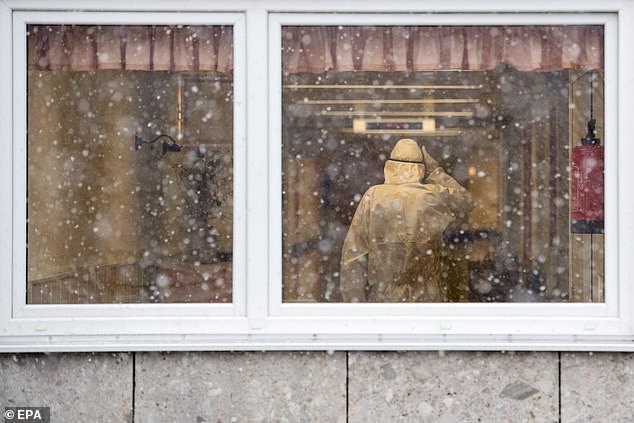 A health worker in a protective suit is seen through the window of a retirement home in Wolfsburg, Germany, where 17 people have reportedly died 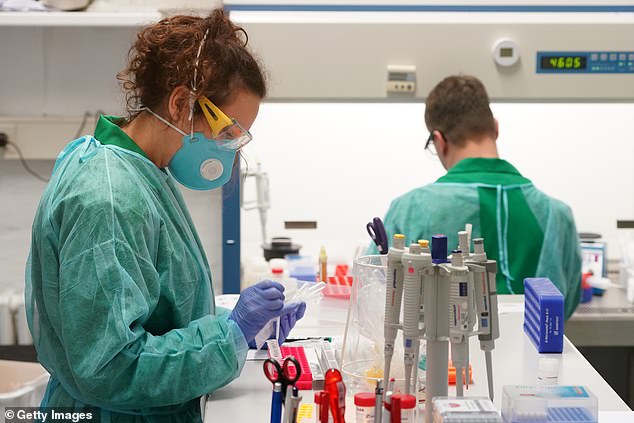 Germany is planning to increase testing to 200,000 a day, and is also toying with phone tracking in a bid to emulate South Korea’s success in slowing the epidemic.

Surveillance is a highly sensitive subject in Germany because of its history with the Nazis and the East German Stasi. Germany’s privacy laws are some of the toughest in the world.

However, health minister Jens Spahn has called for an urgent debate on the use of smartphone technology to track cases.

Germany’s data protection commissioner, Ulrich Kelber, has supported the use of location and contact data shared on a voluntary basis, calling it ‘incredibly useful’.

One German institute is developing an app that would enable the proximity and duration of contact between people to be saved for two weeks on cell phones anonymously and without the use of location data.

‘The prerequisite for such an application is full compliance with German data protection laws and usage on a voluntary basis,’ the HHI institute said. 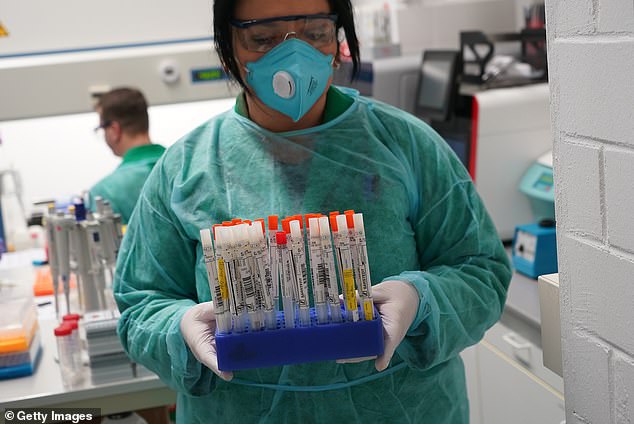 A medical worker carries a tray of patient swabs during the testing process, which Germany wants to expand to 200,000 tests a day

A panel of economists who advise the government say that the economic standstill will slash German output by up to 5.4 per cent.

The exact size of the impact will ‘depend on the extent and duration of health policy measures and the subsequent recovery’, they say.

Germany’s 83million people are currently under slightly less strict lockdown conditions than in other European nations like France and Italy.

But companies from airline giant Lufthansa to carmaker Volkswagen have already slashed their operations in response.

Chancellor Angela Merkel yesterday tested negative for a third time, but remains in quarantine at her home.

Merkel, 65, started working from home after she was vaccinated by a doctor who later turned out to be infected.