A leading German cardinal and confidante of Pope Francis offered to resign on Friday over the Catholic Church’s ‘catastrophic’ mishandling of clergy sexual abuse cases.

Cardinal Reinhard Marx declared in an extraordinary gesture that the scandals had brought the church to ‘a dead end’.

The archdiocese of Munich and Freising, where Marx has served as archbishop since 2007, published his resignation letter to the pope online, in multiple languages, and the cardinal said Francis had given him permission to make it public.

‘It is important to me to share the responsibility for the catastrophe of the sexual abuse by Church officials over the past decades,’ the 67-year-old Marx wrote in the letter.

But he also issued a challenge of sorts for his fellow bishops to use the opportunity of the scandal to save the church and reform it. 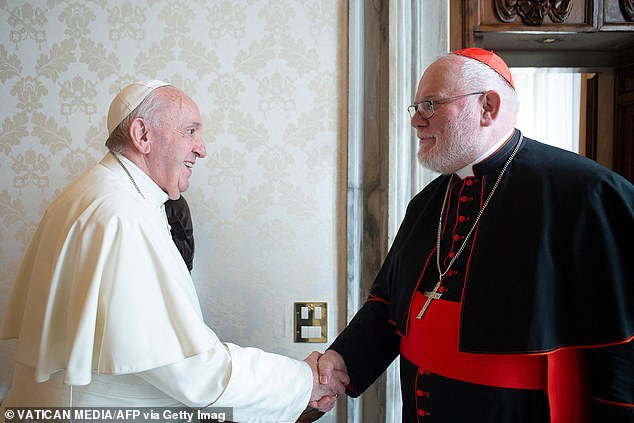 There was no immediate comment from the Vatican, where Marx sits on powerful financial and political committees.

A Vatican spokesman said information about resignations is announced in a daily bulletin, and Friday’s edition did not mention Marx.

The German cardinal noted that Francis had told him to ‘keep performing my service as bishop until his decision is made’.

However, Marx told reporters in Munich later on Friday that he had personally read his letter to the pope last month on the phone and that after thinking about it and praying, the pope told him last week to publish it.

Marx, who led the German Bishops’ Conference from 2014 until 2020, wrote that investigations during the last decade showed there had been ‘a lot of personal failures and administrative mistakes but also institutional or ‘systemic’ failure’.

More than half of the victims were 13 or younger when the abuse took place, and nearly a third of them were altar boys, according to the report. 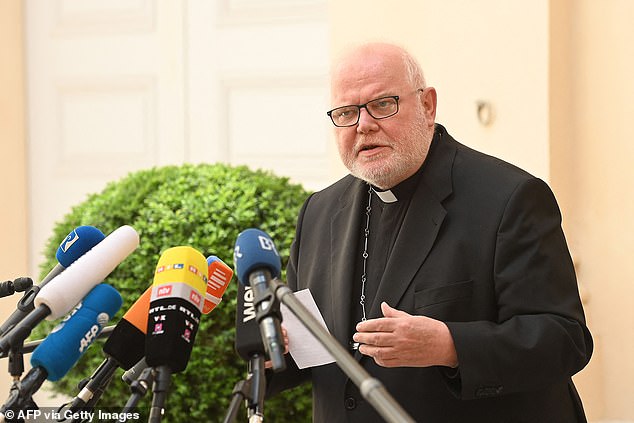 Cardinal Reinhard Marx declared in an extraordinary gesture that the scandals had brought the church to ‘a dead end’. He published his resignation letter to the pope online, in multiple languages, and said Francis had given him permission to make it public

Earlier this year, another report came out about the church officials’ handling of alleged sexual abuse in the country’s western Cologne diocese.

The archbishop of Hamburg, a former Cologne church official who was faulted in that report, offered his resignation to the pope and was granted a ‘time out’ of unspecified length.

Marx himself has not been implicated in any of the investigative reports to date, but he said all members of the hierarchy shared blame for the failures.

A report is expected this summer about the handling of sexual abuse cases in Marx’s archdiocese, German news agency dpa reported.

‘My impression is that we are at a “dead end” which, and this is my paschal hope, also has the potential of becoming a “turning point”,’ Marx wrote the pope, saying he hoped his offer to resign would be seen as a signal for a new beginning, ‘for a new awakening of the Church, not only in Germany.’

Marx later told reporters that he wasn’t tired of being a bishop, but believed someone had to personally take responsibility for the abuse scandal so that the church can be reformed.

‘I am convinced that there will be a new epoch of Christianity, there’s no question about it,’ he said. ‘But this can only happen … if the church renews itself and learns from this crisis.’

Marx said he sees a danger that the abuse issue will only be dealt with in a purely administrative way, which is not enough. 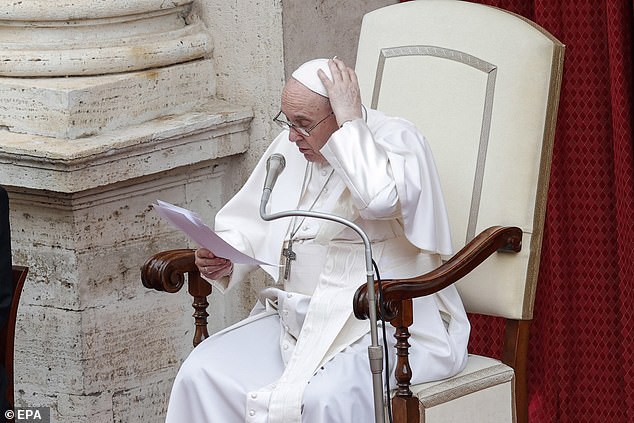 ‘It’s about the overall renewal and reform of the church. This belongs together,’ he said.

Marx’s offer to resign was an extraordinary gesture and laid bare the credibility crisis that the scandal created in Germany, as it has in other countries.

To try to recover that credibility, Marx has spearheaded a process of reform and debate with the powerful German laity to address some of the structural problems that contributed to the crisis.

But the so-called ‘Synodal Path’ has sparked fierce resistance inside Germany and out, primarily from conservative bishops and priests opposed to opening any debate on issues such as priestly celibacy, women’s role in the church and homosexuality.

Resistance has also come from the Vatican and bishops outside Germany, including culture warriors in the United States who have broken with church protocol to pen essays critical of the German reform process.

In his resignation letter, Marx made no mention of his status as a member of Francis’ kitchen cabinet, a group of cardinals who advise the pope, or his role as head of the Vatican’s Council of the Economy, a group of experts who oversee the Vatican’s finances. 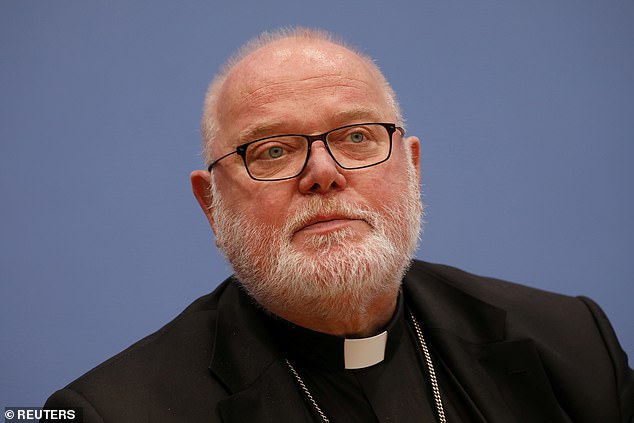 Marx, who led the German Bishops’ Conference from 2014 until 2020, wrote that investigations during the last decade showed there had been ‘a lot of personal failures and administrative mistakes but also institutional or ‘systemic’ failure’

The head of a powerful laypersons’ organisation, the Central Committee of German Catholics, or ZdK, said he was ‘deeply shocked’ by the cardinal’s offer to resign.

‘The wrong person is leaving,’ ZdK President Thomas Sternberg told Germany’s Rheinische Post newspaper. ‘What Marx did for ecumenical Christianity, for the Synodal Path and also when it comes to the processing of sexual abuse (revelations) is very important.’

The ZdK has participated in the Synodal Path meetings for more than a year with the German Bishops’ Conference.

The meetings. which are set to conclude in the fall, feature discussions about allowing priests to get married, the ordination of women and a different understanding of sexuality, among other reforms.

The process was launched as part of the response to revelations of clergy sexual abuse.

‘His resignation offer makes clear that the church in Germany needs to continue the Synodal Path,’ Baetzing said in a written statement. 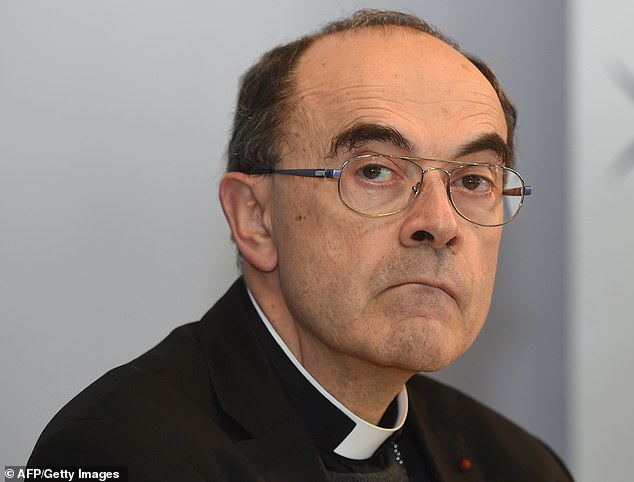 ‘The Synodal Path was created to look for systemic answers to the crisis. The basic, theological discussions which determine the Synodal Path are therefore a significant and important part of this process.’

Some conservative commentators, however, cheered Marx’s resignation offer as evidence that his ideas for the German Church via the Synodal Path were ‘dead,’ not the church itself. Some on the right have warned that the German process of reform could lead to a schism, or formal break from Rome.

‘No kidding, the Catholic Church in Germany really had reached a dead end, if by “dead end” one means the liberal, modernist way forward led by Cdl Marx,’ said Rod Dreher, an Orthodox convert from Catholicism and columnist for The American Conservative. ‘He is right to resign. Let someone rise who can offer leadership based in truth.’

Other top cardinals and bishops previously offered to resign for alleged involvement in abuse-related failings, only to see Francis sit on the decision for some time.

French Cardinal Philippe Barbarin offered to resign in 2019 after a French court convicted him of failing to report a pedophile priest.

Francis refused to accept the resignation pending the outcome of Barbarin’s appeal, though he accepted it the following year, by which time Barbarin had been acquitted.

Francis allowed Australian Cardinal George Pell, his economics minister, to take an extended leave of absence in 2017 to return home to face trial for old sexual abuse charges. Pell’s conviction was overturned by Australia’s High Court last year, but by that time, Pell was just a year shy of retirement age and Francis had already named a successor.