A decision by the powerful police union to fund the legal defences of three officers charged with leaking photographs of former AFL coach Dani Laidley has polarised the force, with many members angry about the use of union fees on the cases.

Senior officers have told The Age that the unauthorised release of Laidley’s mugshot and a photo of her being interviewed wearing a wig and make-up had caused enormous reputational damage for Victoria Police and those responsible for the breach should not be helped. 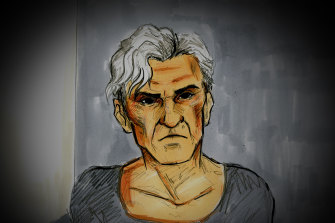 A court sketch of Dani Laidley from last year.Credit:Nine News

“What sort of message does this send to the community when the Police Association goes into bat for these blokes,” said a senior sergeant from Melbourne’s south, who is also a union member.

“They’ve been suspended without pay and should have to fund their own legal costs too. That’s my opinion and I’d say it’s a widely held one by those in the job.”

Some officers are also furious about the timing of the leak.

“Remember, this happened about a week after four officers lost their lives on the Eastern Freeway, at a time when there was a huge outpouring of support for Victoria Police. [The leak] was a big blow to us and ended all that goodwill,” said a senior constable with almost 15 years’ experience.

“The association has a legitimate role in ensuring that all members are appropriately represented. In consideration of applications, members appear before a panel of their peers, who consider whether their circumstances meet eligibility for support under our rules,” a union spokesman said.

The spokesman said the organisation had not received complaints from members about the funding.

On Friday afternoon, Constable David Hall, 28, was granted an adjournment in the Ringwood Magistrates Court, where he was facing two counts of disclosing police information without reasonable excuse.

Charge sheets allege that on May 3 last year, Constable Hall sent three text messages each to a man and a woman, and that the messages contained information about Laidley’s arrest, drug possession, possible charges and her gender.

Barrister Kerry Stephens, who is acting for Constable Hall, said the case was unlikely to be resolved and was headed for a contested hearing.

The three officers were all charged following a seven-month internal investigation into the circulation of the images, which also resulted in disciplinary action for 39 officers and seven public servants.

The Age recently revealed that Dani Laidley, formerly known as Dean Laidley, had launched civil action against Victoria Police and would be seeking aggravated and exemplary damages.

Laidley alleges Victoria Police and the officers breached the duty of care owed to her while she was in custody, and that they failed to care for her physical and psychological safety by the release of the images, according to a Supreme Court writ.

The former North Melbourne player and coach, who recently underwent a gender transition, pleaded guilty to stalking in November last year and was placed on an adjourned undertaking to be of good behaviour for 18 months.