Washington: US prosecutors alleged that five people worked with Proud Boys from Kansas City and other unnamed individuals to breach the US Capitol on January 6, unsealing charges Thursday in one of the largest co-defendant cases yet brought in an investigation that has charged more than 200.

The defendants, wearing helmets, vests and tactical gear marked with fluorescent orange tape, “appeared to gesture and communicate to one another” to coordinate efforts during and after forcing entry to the Capitol, the FBI alleged.

Surveillance footage showed at least four taking actions to prevent police from deploying descending metal barriers to seal off underground access to the Capitol, allowing the invading crowd to surge forward, the FBI said in a 28-page affidavit dated Wednesday. 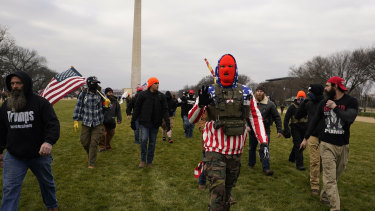 People march with those who claim they are members of the Proud Boys as they attend a rally in Washington.Credit:AP

The arrests of William Chrestman, Christopher Kuehne, Louis Enrique Colon, all of Kansas City, and siblings Felicia and Cory Konold bring the number of those affiliated with the Proud Boys to nearly 18 among those charged with battling law enforcement and obstructing the electoral vote confirmation of President Joe Biden’s victory.

US prosecutors and the FBI have accused self-identified Proud Boys with leading some of the earliest, most destructive, and critical efforts to overrun police and break in to the building. Two have been charged with counts listed as federal crimes of terrorism, relating to destruction of government property to intimidate or coerce the government.

Charges for the Kansas City group were unsealed after all five were taken into custody. Information about their lawyers was not available, and efforts to contact relatives were not immediately successful. 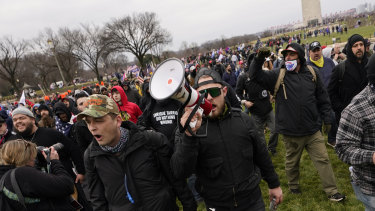 Ethan Nordean, with backward baseball hat and bullhorn, leads members of the far-right group Proud Boys in marching before the riot at the US Capitol. Credit:AP

The Proud Boys is a far-right group with a history of violence who former president Donald Trump embraced during the campaign and which mobilised to attend the January 6 events. Proud Boys leader Henry “Enrique” Tarrio, who was arrested two days earlier for allegedly burning a Black Lives Matter banner torn down from a historic church during a previous rally in Washington, has pleaded not guilty and denied that the Proud Boys organised any violence at the Capitol.

Nevertheless, Thursday’s charges significantly expand the number of those allegedly affiliated with a group of dozens of Proud Boys allegedly led by Joe Biggs, of Miami, and Ethan Nordean, of Seattle, who have been charged separately.

In a footnote to a charging affidavit, an FBI agent noted, “Your affiant believes that there may be more persons involved in this particular conspiracy than the persons described throughout this affidavit, and the investigation is ongoing.”

The FBI previously has alleged that Proud Boy Dominic Pezzola, of Rochester, NY, was one of the first to lead the mob both outside and inside the Capitol. The FBI has accused him in court records of removing barricades, stampeding police, stealing an officer’s riot shield and using it to break in a Capitol window that allowed others to rush in perilously close to where Vice President Mike Pence was being evacuated.

Pezzola faces charges including counts of obstructing a government proceeding and two crimes of violence, including destruction of government property to intimidate, coerce, or retaliate against government action – which by law is a federal crime of terrorism, prosecutors said Wednesday in securing his detention pending trial.

Also charged is Nordean, 30, whose communications the FBI alleged indicate that he and others were planning in advance to organise a group that would attempt to overwhelm police barricades and breach the US Capitol.

Nordean, also known as Rufio Panman, was also charged with obstruction of the vote certification and the statutory terrorism charge of aiding and abetting destruction of property to intimidate or retaliate against the government. US prosecutors are appealing a magistrate judge’s release order issued on Monday.

The FBI has alleged that Nordean and others appeared motivated in part by what they perceived to be an insufficient police response to the stabbing of one of their members who attended a December pro-Trump demonstration in D.C.

The Kansas City group arrested Thursday interacted with the Nordean-Biggs group, appearing to move together and communicate during the riot, the FBI alleged.

All five in the Kansas City group wore pieces of orange tape from their headgear or backpacks, the affidavit alleged, and rolls of tape were carried at one point by Kuehne. Chrestman carried a wooden club or ax handle wrapped in a blue flag, court documents said.

The bearded Chrestman, wearing a black cap, hooded sweatshirt and tactical vest, has similar facial features to Proud Boys founder Gavin McInnes, the FBI agent noted, and has been misidentified as McInnes by some social media sleuths who noted Chrestman’s appearance in videos of the riot.

Video footage taken as a crowd presses up against a thin line of Capitol Police on the west front of the building shows Chrestman shouting, “Whose house is this?” and the crowd answering, “Our house,” according to charging papers

At another point, Chrestman allegedly shouted on video at an officer, “You shoot and I’ll take your fucking ass out!” and called on other members to stop police from arresting one rioter, “Don’t let them take him!”