‘Oh f*** off!’ Fans declare Tiger Woods is BACK after he’s caught cursing on a hot mic when his approach shot rolled off the ninth green at the Masters

Tiger Woods is back, and with him, his patented fist pump, his massive galleries of thousands of fans and, of course, his occasional expletive.

Making his return to the links 14 months after suffering major leg injuries in an LA car crash, Woods thrilled spectators in the opening round of the Masters on Thursday, and sprinkled in a few choice words along the way.

Most notably, on the ninth hole, Woods was caught saying ‘oh f*** off’ as his approach shot was rolling off the green.

Despite the unfortunate role, he still managed to save par on the hole. 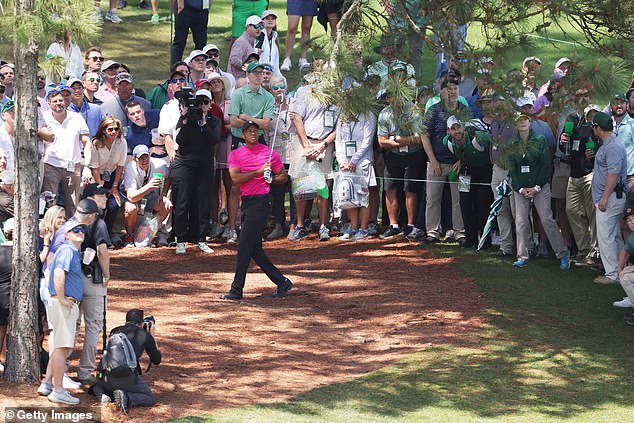 Tiger Woods follows his shot from the ninth hole during the first round of the Masters at Augusta National. As the approach shot rolled off the green, he was heard saying ‘oh f*** off’ 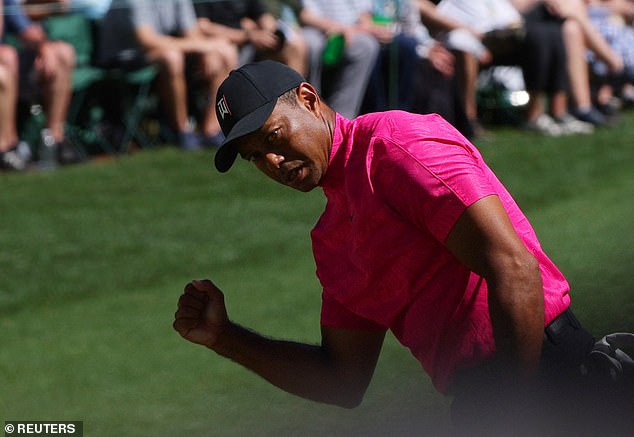 Tiger Woods is back, and with him, his patented fist pump, his massive galleries of thousands of fans and, of course, his occasional expletive

Spectators at Augusta National didn’t seem to catch the utterance, but those watching ESPN didn’t miss a thing.

As for his play, Woods finished -1, just three shots off the pace while showing only minimal signs of the injuries that have sidelined him since before his 2021 crash.

He walked among the azaleas with just the hint of a limp and Woods couldn’t quite bend over to read the putts on Augusta National’s tricky greens.

Otherwise, there was nothing to indicate that he nearly lost his right leg 14 months ago in a devastating car wreck.

Woods’s greatest comeback yet got off to a most encouraging start Thursday in the opening round of the Masters.

With a huge gallery cheering his every move as storm clouds gave way to brilliant spring sunshine, Woods looked every bit like the guy who’s won five green jackets and defied the odds time and time again. 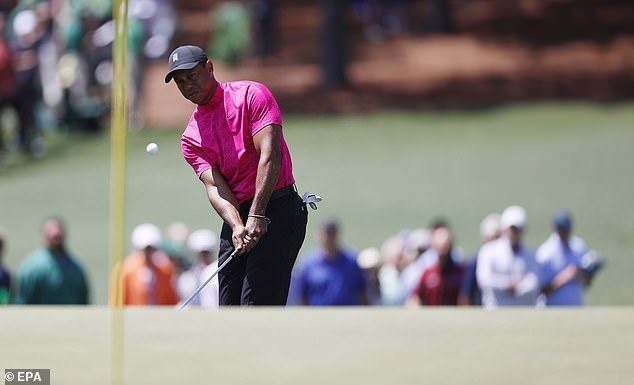 From the collapse of his marriage to multiple surgeries, Woods has always found a way to bounce back.

A tap-in birdie at No. 6 sent the patrons into a frenzy. A sloppy bogey at the par-5 eighth brought some groans, but Woods’ brilliant play around the greens kept him solidly in the mix as he approached the end of a round no one could’ve expected.

No one except Woods, that is.

He made it clear he had every intention of winning when he decided to make the Masters his first competitive tournament since that horrific car wreck in February 2021 led doctors to say his right leg might need to be amputated.

Woods was 1-under par after another birdie at the 13th, just two strokes off the lead at mid-afternoon.

Woods started the round with five straight pars – he just missed a birdie at the tough No. 5 hole when a 15-foot putt lipped out – before delivering a vintage tee shot at the par-3 sixth. 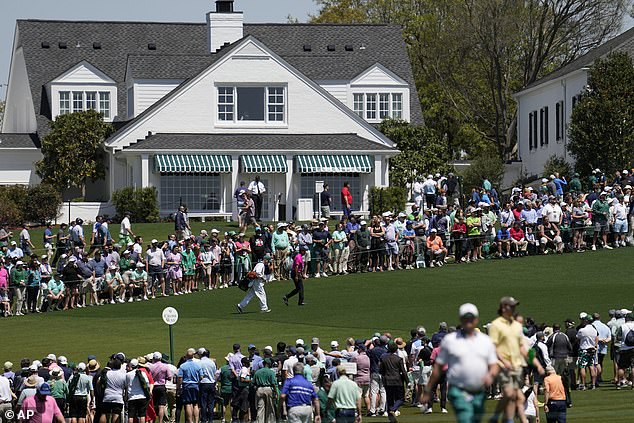 The ball climbed up a ridge on the green and stopped 2 feet short of the flag, leaving Woods with a gimme that put him in red numbers for the first time.

A wedge shot and errant chip led to a bogey at No. 8, a hole that should be a prime birdie opportunity. But Woods bounced back with a tricky downhiller from 8 feet to save par at No. 9.

Woods insisted that his hands still held the deft touch that has helped him win 15 major titles – the first of them 25 years ago at this very place – and capture a record-tying 82 victories on the PGA Tour.

Beginning at No. 7, he missed the green on five straight holes, but kept recovering with brilliant wedges and clutch putts.

Yep, there was a long way to go.

Still, it felt as if Woods was already a winner. 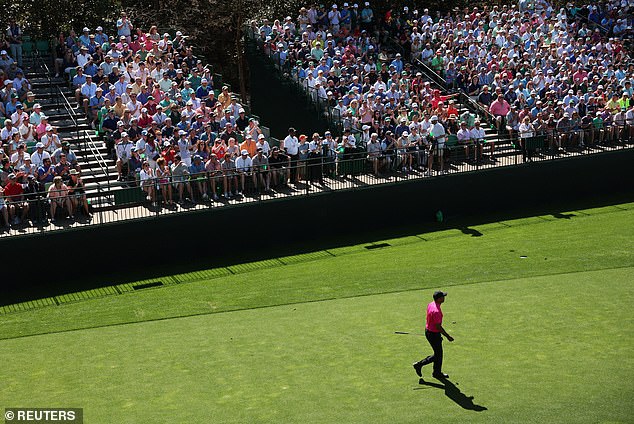 Tiger Woods of the U.S. walks off the 16th tee during the first round on Thursday in Augusta

Wearing a pink shirt and black pants, Woods was greeted by thunderous applause when his name was announced to a huge gallery surrounding the first tee.

Woods failed to make solid contact with his first shot: a 264-yard drive that faded behind a bunker on the right side of the fairway. His approach rolled off the front of the green, but he sank a 10-foot putt to save par, bringing another huge roar from the patrons.

Woods walked slowly, knowing that he faced four tough days on an extremely hilly course if he manages to make the cut.

He couldn’t fully bend over to read putts, forcing him to rely more on caddie Joe LaCava to help him judge the treacherous greens at Augusta National.

His career was in jeopardy after the car wreck left him confined to a hospital bed for three months. Woods was out of the public eye until last November, when he posted a video of him swinging a club with a simple message, ‘Making progress.’

His lone tournament in the 508 days since he last competed was a just-for-fun event in December in which he rode in a cart and was paired with his 13-year-old son, Charlie. 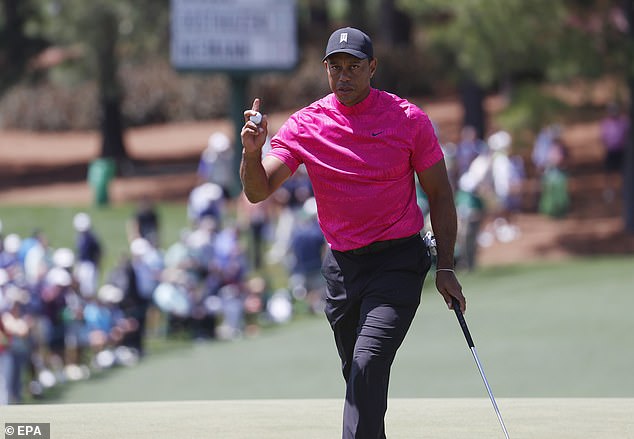 Despite the long layoff and the obvious physical limitations with screws and rods still holding the bones in place in his right leg, Woods clearly thinks he can win his sixth green jacket.

At 46, he would be the oldest Masters champion by three weeks over Jack Nicklaus.

The biggest question is how Woods holds up over 18 holes for four straight days. He walked 18 holes last week – his first big test – during a scouting trip with his son.

He teed off at 11:04am Thursday – 30 minutes behind schedule because of lingering showers – with Louis Oosthuizen and Joaquin Niemann.

‘I can hit it just fine. I don’t have any qualms about what I can do physically from a golf standpoint,’ Woods said Tuesday. ‘Walking is the hard part. This is normally not an easy walk to begin with. Now given the conditions that my leg is in, it gets even more difficult.

‘Seventy-two holes is a long road and it’s going to be a tough challenge,’ he added. ‘And a challenge that I’m up for.’ 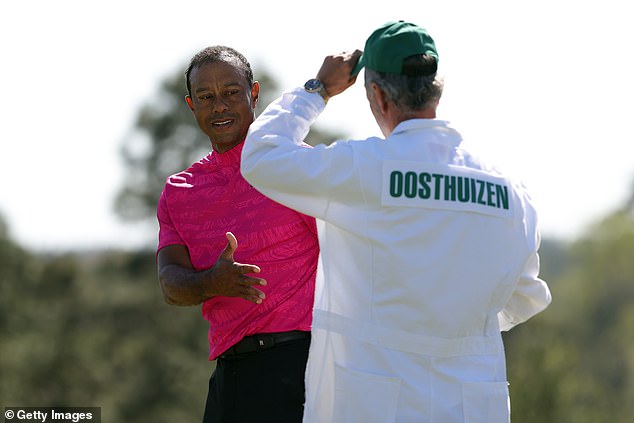