Ex-police officers are called back into service with 20 per cent off sick amid coronavirus pandemic – as Britain’s 48,000 firefighters deliver supplies, drive ambulances and retrieve dead bodies in huge national effort

The Metropolitan Police has asked retired officers to consider returning to the beat amid the coronavirus outbreak.

Commissioner Cressida Dick is writing to all former Met officers who retired within the last five years to ask them to re-join either in a paid or voluntary capacity.

Serving officers who are nearing 30 years’ pensionable service are also being asked to delay their retirement. 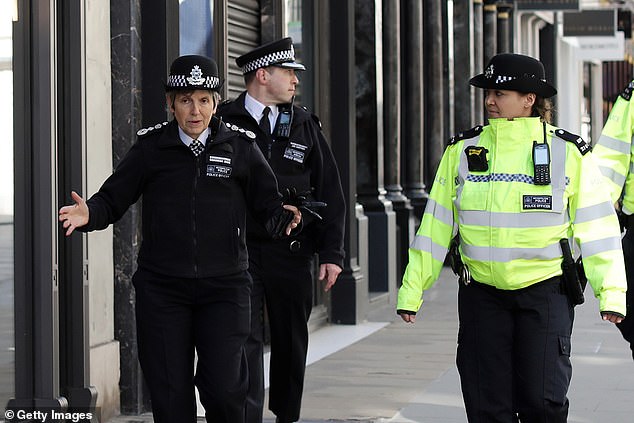 Metropolitan Police Commissioner Cressida Dick, pictured on the beat on New Bond Street earlier this week, left, has written to former officers who have retired over the past five years to ask them to return temporarily to help with Scotland Yard’s coronavirus response

The government is also considering allowing civil servants to volunteer as special constables in an effort to bolster numbers.

It is understood the Government is considering temporarily changing tax and pension rules which would prevent former police officers from returning to the beat.

Ms Dick said: ‘On behalf of London, and all the men and women of the Met, it is important that we take all reasonable steps to bolster our numbers.

‘Demands on us will grow and vary over the coming weeks but I want people to know and see that the Met is here for them. We must maintain our operational resilience and continue to provide the best possible service to London.

‘Police officers overwhelmingly join ‘the job’ to help people and to make a difference, and that desire will be as strong today as it was the very first day they joined.

‘I am hopeful that these exceptionally experienced and knowledgeable former colleagues choose to come and be part of our team and support London at this extraordinary time – either as a re-employed police officer, special constable or a volunteer.’

The service tweeted: ‘We are asking former members of our team to consider returning, if they can, to support us in helping Londoners in need.

Firefighters are also joining the fight against coronavirus by helping delivering food and medicines as well as driving ambulances or retrieving dead bodies. There are currently 48,000 firefighters and control staff in Britain.