‘Boris is damaging the country’: Ex-Scottish Tory leader Ruth Davidson blasts Boris Johnson and says he should quit as she campaigns for local elections with successor Douglas Ross – who had earlier explained why he wants the PM to STAY in No10

Scottish Conservative leader Douglas Ross and his predecessor Ruth Davidson awkwardly hit the election campaign trail together today – as they remained split over whether Boris Johnson should quit following his Partygate fine.

Mr Ross and Baroness Davidson posed for pictures in Edinburgh as they urged voters to back the Scottish Tories ahead of next month’s local elections.

But, despite the smiles, the pair remained divided over whether the Prime Minister should remain in Downing Street after being found to have breached Covid rules.

Opposition parties have demanded the PM’s resignation after the Metropolitan Police found he breached his own Coronavirus restrictions – with some Tories also newly questioning whether he can remain in office.

Mr Ross, who sits in the House of Commons as one of Mr Johnson’s Tory MPs, had initially called for the PM to resign over the Partygate scandal back in January and submitted a letter of no confidence in Mr Johnson’s leadership.

It came after the PM admitted he had attended a ‘bring your own booze’ event at Number 10 at the height of the UK’s first national lockdown in May 2020.

But Mr Ross has now reversed his position and thinks Mr Johnson should stay in No10 – even despite him being fined – in order to continue Britain’s efforts to support Ukraine against Russia’s invasion. 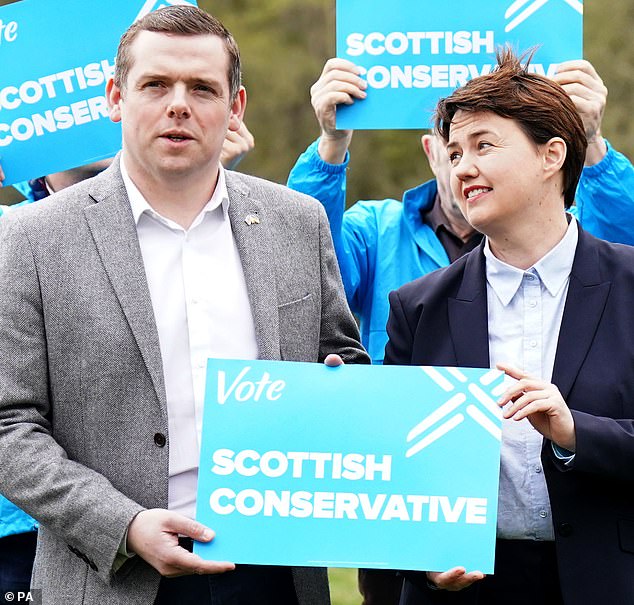 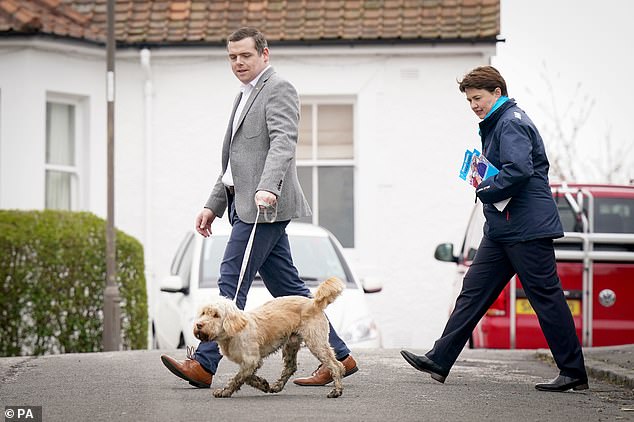 Mr Ross and Baroness Davidson, with Hamish the dog, handed out leaflets in northwest Edinburgh 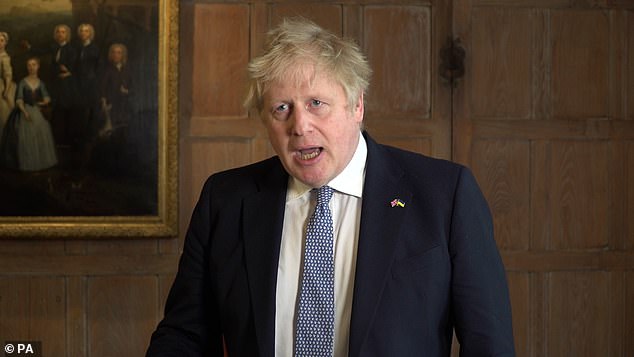 Mr Ross thinks Boris Johnson should stay in office despite the PM’s Partygate fine. But Baroness Davidson thinks he is ‘damaging the country’ by remaining in power

His U-turn on the PM’s future – which has seen Mr Ross withdraw his no-confidence letter – has put him at odds with Baroness Davidson, who led the Scottish Tories between 2011 and 2019.

She has maintained her belief that Mr Johnson – who she has frequently clashed with – should resign over Partygate.

Doubling-down on her stance today, Baroness Davidson told ITV News: ‘The PM has been shown to have broken the law, he’s accepted that, he’s paid the fine.

‘He’s also presided over a culture in Number 10 of persistent and repeated law-breaking.

‘He spoke to both the country and Parliament and said that no rules had been broken and they clearly had been and he’s not corrected the record.

‘So I think in those circumstances he should go.’

Pressed on whether she was accusing Mr Johnson of having misled Parliament – which is usually a resigning matter for ministers – the Tory peer said: ‘He stood up in Parliament and he spoke to the country and said all rules were followed.

‘Clearly that’s not the view of the Metropolitan Police.

‘And it certainly doesn’t seem to be the view of those people who have accepted their penalty notices and have paid them – including the PM.’

She added that Mr Johnson was ‘damaging the country’ by remaining in power while having been found guilty to have broken laws he introduced himself.

‘I’m a Conservative and part of that is believing in the institutions of this country,’ Baroness Davidson said.

‘I think the office of the Prime Minister should lead by example, especially when it’s setting the laws of the country.’

In a sign of the division between two of the most senior figures among Scottish Conservatives, Mr Ross had earlier insisted that Mr Johnson was a truthful man – although he stressed the PM must explain the circumstances around his police fine to the Commons.

Explaining why he was now backing the PM to remain in power, Mr Ross told BBC Radio Scotland: ‘Anything that would destabilise the UK Government at this time would be a bonus to Vladimir Putin.

‘He is indiscriminately killing innocent people and I will do nothing to support a war criminal like Putin.’

After campaigning with Baroness Davidson in north west Edinburgh, Mr Ross acknowledged he held a different position to her.

He told reporters: ‘I have a different position from Ruth as I had the opportunity as a Member of Parliament to submit a letter to the 1922 Committee, which Ruth and others don’t.

‘So that may change peoples’ judgement.

‘But at the moment I think submitting that letter would undermine the UK Government’s response to what we are doing to help and support the people of Ukraine.’