A rogue deer running through the empty streets of locked down inner-city Melbourne has stunned locals who captured bizarre footage of the animal racing through Fitzroy on Saturday morning.

Resident Rosie Bourke had just finished a run with her boyfriend about 10.30am and was stretching on a bench on Johnston Street when the terrified animal ran past her.

“We were just on the edge of Johnston Street and we saw this deer running towards us,” she said. “Some people are saying it was a cow, but it was definitely a deer with full-on antlers”.

Ms Bourke said the animal “looked terrified” and ran in front of a car before dashing down George Street.

Ms Bourke captured a few seconds of footage showing the deer bolting in front of the moving car. 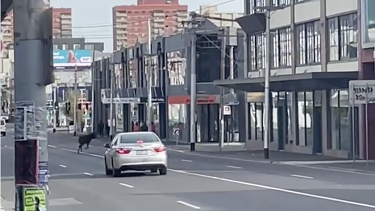 The deer running down Johnston Street on Saturday morning.Credit:Rosie Bourke

“I couldn’t capture the video quick enough I was in so much shock,” she said.

“It was absolutely bizarre and shocking, and sad – he looked really scared. Luckily the road was quiet.”

Victoria Police confirmed it had received reports of the deer on the loose in Clifton Hill and Fitzroy, but it is unclear where the animal came from.