Last week, we saw the Prime Minister at his bold, freedom-loving best.

His decision not to ruin the festivities was soon vindicated, with concrete data suggesting that Sage’s apocalyptic forecasts were spectacularly wrong – yet again.

Yet despite evidence the variant will not wreak devastation, those self-same scientists are now fear-mongering to panic the PM into cancelling New Year. 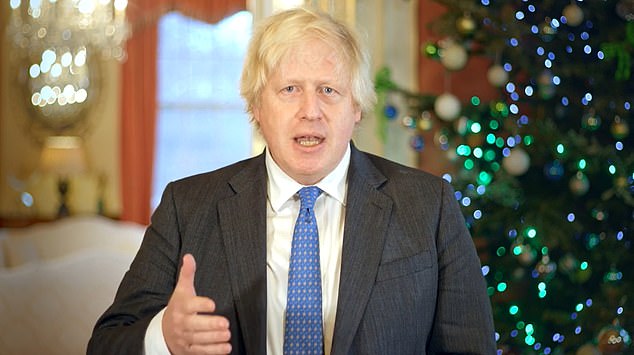 In the strongest possible terms, this paper urges him: Stick to your guns. Ignore the doomsters. And show faith in the intrinsic common sense of the British public.

Instead of treating us like toddlers over Christmas, Boris trusted we’d do the right thing to keep ourselves and others safe. And whether by taking lateral flow tests galore or doing less socialising, we did just that.

So in the absence of a cataclysmic turn of events that sees Omicron place an untenable burden on the NHS, this sensible approach must continue.

Persuading and guiding the public must be the tactics deployed to impede the virus, not the threat of a fine or being hauled to court.

Pulling down the shutters over the busy New Year would be catastrophic for the beleaguered hospitality industry – and a final nail in the coffin for countless pubs and restaurants.

It would not only blight the economy but do immense damage to our social fabric and physical and mental health.

Unless there is conclusive evidence that Omicron is an overwhelming danger, the PM should reject the clamour for further limitations on our liberties.

Poll must lead to reset

If Mr Johnson guides the country successfully between the Omicron devil and the deep blue sea of economic devastation he will deserve our deep gratitude.

In a just world, that would reap electoral rewards. The PM desperately needs to. For a poll predicts an election held today would wipe out the Tories’ massive majority.

It is further evidence of the pressing need for a reset of a Downing Street operation woefully lacking authority and gravitas.

There is, however, a crumb of comfort. Despite the avalanche of sleaze and impropriety allegations levelled against him, voters are distinctly unenthusiastic about Labour winning power.

Boris must heed this warning and move on from Covid to the business of government: Levelling up the left-behind regions and exploiting our post-Brexit opportunities.

Of course, huge challenges loom. A severe cost of living crisis is tearing down the road and imminent national insurance hikes will further squeeze families and businesses.

By regaining his Tory principles, the PM can safely navigate these troubled waters. Imposing new Covid restrictions will only make them choppier – and his task harder.

THE ease with which a crossbow-wielding intruder broke into the grounds of Windsor Castle, as the Queen celebrated Christmas there, is deeply alarming.

True, armed officers quickly apprehended the raider. And it seems the individual was not motivated by terrorism.

Nevertheless, this appears to be a serious security lapse. The Metropolitan Police – and the public – must be vigilant when it comes to the monarchy.

Today, we report that senior royals are up in arms over attempts by Scotland Yard to replace their trusted, long-standing personal bodyguards. Is it any wonder?

Perhaps this might eliminate ‘cliquey-ness’ in police ranks. But Saturday’s events should serve as a reminder that there can never be short cuts on royal security.