Nicola Sturgeon was forced into a humiliating climbdown today as she said she accepted assurances from the UK government that protective equipment for the NHS and care homes is not being prioritised for facilities in England.

The Scottish First Minister said yesterday she would be probing claims that Scottish services were being deprived of PPE because it was being sent to facilities south of the border.

Her comments prompted a rebuke from Chancellor Rishi Sunak who said there was ‘no truth’ to the rumours.

Today Ms Sturgeon said she is now ‘willing to accept’ assurances from the UK government that every home nation is being treated fairly when it comes to the allocation of vital NHS equipment during the coronavirus outbreak. 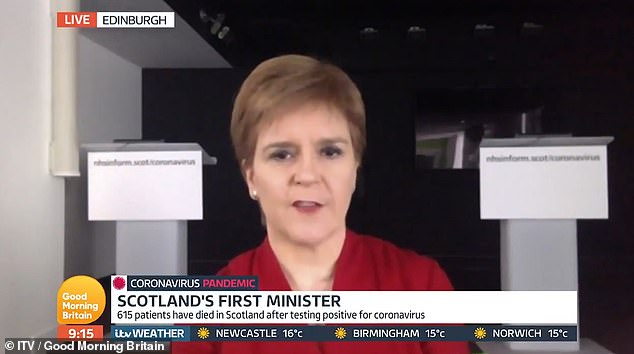 She told ITV’s Good Morning Britain programme: ‘There was a concern raised by the care home sector in Scotland that some of their usual suppliers of PPE were telling them that they couldn’t supply normally right now because they had been told that they had to prioritise the NHS in England.

‘That was obviously a concern for us. Now we have had assurances from the UK government that that is not an instruction that has been given from the NHS in England or Public Health England.

‘I am willing to accept that assurance.’

Ms Sturgeon said there was still ‘an issue to try to resolve’ with companies to ‘make sure that they are dealing fairly with providers of care north and south of the border’.

She said PPE supply is ‘under real pressure globally’ and that allocation of the equipment in the UK ‘is just about ensuring fairness for everybody, health and social care, and in all parts’ of the country.

‘I hope that we can see that collaborative approach continue because in the main we have all been working across all of these issues really collaboratively and cooperatively up until now,’ she said.

Her comments came as one of the firms at the centre of the cross-border PPE row suggested the Scottish government had not done as much as Public Health England to stockpile the vital equipment.

Sam Gompels, managing director of Gompels HealthCare, told the Press and Journal: ‘The fact is Public Health England got their finger out and organised these distribution channels and are getting pilloried for it because public health Scotland, or whatever the equivalent is, have not necessarily organised the same and that’s probably the nub of it.’

Ms Sturgeon yesterday announced she intended to investigate the PPE prioritisation claims which had been made by the chief executive of Scottish Care, Donald Macaskill.

She announced the probe despite her own government’s national clinical director branding the claims ‘rubbish’. 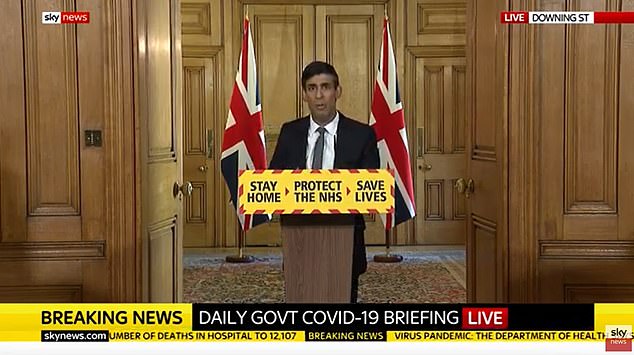 Chancellor Rishi Sunak used yesterday’s No10 press conference to say: ‘There is no truth in these stories that companies have been told to prioritise (over) PPE equipment’

Professor Jason Leitch had told BBC Radio Scotland that he had investigated the claims made and found them to be baseless.

But Ms Sturgeon insisted on an investigation as she said at lunchtime that any such move to block the movement of masks, gowns and gloves would be ‘unconscionable and unacceptable’.

Mr Sunak dismissed the claims when he was asked about them at the daily coronavirus Downing Street press conference.

He said: ‘There’s no truth in those stories, that those companies had been told to prioritise PPE equipment.

‘Rather, the contrary is actually happening… there has been incredibly close collaboration between our four nations in this regard.’