London: Being overweight has emerged as one of the most important risk factors in getting admitted to hospital with severe forms of coronavirus, according to the biggest study of British people with the disease.

The analysis of 15,100 hospitalised patients from across Britain has identified how carrying excess weight increases the likelihood that severe complications will develop from COVID-19, according to a report in the London Telegraph. 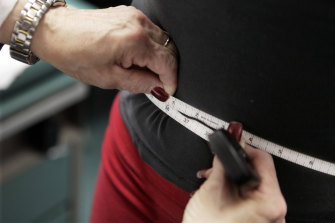 The study’s author says while the exact reasons for overweight people experiencing more severe symptoms is not clear, it could be a result of greater inflammation in the fatty layers under thte skin and around the internal organs.Credit:AP

Scientists from three universities have analysed data obtained from COVID-19 patients to draw up the most comprehensive profile yet of how the virus exploits age, sex and underlying health conditions.

The study, based on statistics and samples obtained from 177 British hospitals, has been analysed by scientists from Edinburgh and Liverpool Universities and Imperial College London and then compared with studies in China, where the coronavirus first emerged.

Researchers have been struck by how being overweight appears more of a factor in hospital admission in Britain compared with China, where fewer people are obese.

The study was led by Professor Kenneth Baillie at Edinburgh University, Professor Calum Semple at Liverpool University and Professor Peter Openshaw at Imperial College London. Their report has not yet been peer reviewed and will be published in the coming weeks.

Openshaw, an expert in respiratory disease, said the study is "world beating", in part because so much data has been obtained after a system of testing was set up in readiness for an epidemic following the 2009 swine flu pandemic.

Although the exact reasons for overweight people being admitted to British hospitals with more severe symptoms is not clear, Openshaw said it could be because they have greater inflammation of adipose tissue – the fatty layer under the skin and around internal organs. This contributes to an enhanced "cytokine storm" – the immune reaction in which too many cytokine proteins enter the bloodstream too quickly – which can be life threatening.

He continued: "Then, there is the possibility that obese patients find it more difficult to breathe when in bed because the stomach and fatty layers can push against the diaphragm and rib cage, preventing them obtaining a deep breath.

"Another possibility is simply that overweight people are regularly in contact with medical services and so are more likely to be admitted to hospital."

Openshaw added: "The obesity epidemic is one of the worst challenges to public health since smoking."