British Chancellor Michael Gove said China had not shared accurate data about the "scale, nature and infectiousness" of the disease, as Downing Street sources suggesting the Communist superpower would face a "reckoning" when the pandemic is over. 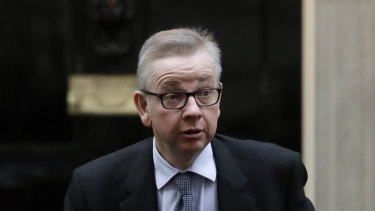 Tory MPs have used the anger towards China to renew calls for the government to rethink its policy on using Huawei to build part of the 5G mobile phone network.

But there were also accusations that ministers are using China as a convenient scapegoat to deflect criticism from the British government's failure to ramp up testing in the way that many other countries have done. Britain has only just reached the 10,000 tests per day mark, whereas Germany, which has a much lower death rate from coronavirus, does 500,000 tests per week, seven times as many as Britain.

Asked why Britain was so far behind some other countries in the scale of its testing regime, Gove said: "The first case of coronavirus in China was established in December of last year, but it was also the case that some of the reporting from China was not clear about the scale, the nature, the infectiousness of this."

Government sources have accused China of "spreading lies" about the virus to escape blame, including an attempt to suggest that a US Army delegation which visited Wuhan, the source of the pandemic, could have been to blame.

Ministers have privately expressed anger at the way China's obsession with secrecy has hampered the global response to the virus, with suggestions from scientific advisers that the true number of infections could be 40 times higher than Beijing has admitted.

Tom Tugendhat, the Tory chairman of the foreign affairs select committee, said: "It's quite clear that the relationship with China has got to change.

"The idea that we can import cheap goods and not import the consequences of slave labour, of silencing opposition and government repression, including of the truth about pandemic outbreaks, is clearly not true."

While civil servants are understood to have urged British Prime Minister Boris Johnston to stick to his current policy on China, some cabinet ministers and close aides are increasingly uncomfortable with the closeness of the UK's relationship with Beijing.

Iain Duncan Smith, the former Tory leader who has led calls for Huawei to be locked out of 5G contracts, said yesterday that the virus should lead to a "rethink" of how dependent Britain has become on China and a shift in foreign policy.

"It is bigger than just Huawei. China dominates everything and this should be a massive wake-up call to the government," Duncan Smith said.

On the question of why Germany was so far ahead of the UK in its testing regime, Gove said: "It's certainly the case that the Germans have had success in testing. There are other countries that are also ramping up testing, but the acceleration here in the UK is significant.

"Frankly the most important thing is not to look backwards but to look forwards and to do everything that we can to increase the number of tests.

"Once this dreadful epidemic is over there will be an opportunity to look back and to learn appropriate lessons."

Tony Blair, the former prime minister, said the "constructive" answer was to test "virtually everybody" in Britain to enable healthy people to get back to work and end the current lockdown.

Labour deputy leadership candidate Richard Burgon used the comments to criticise the government and noted the World Health Organisation's praise of China's handling of the crisis.

"This is a Trump-style attempt to divert blame from the UK Government's failures," Burgon said.

Earlier this month 38 Tory MPs rebelled against the government in a vote designed to force Mr Johnson to set a timetable for excluding Huawei from the 5G network.

The Government's 80-seat majority was cut to just 24 as the rebels lost by 306 votes to 282, Mr Duncan Smith and others believe they will win a vote later in the year when legislation comes to Parliament which would allow the Chinese firm a 35 per cent share of "non core" 5G contracts.