The report said damages should be for at least the £3.2 ($6.5 trillion) being spent by G7 nations propping up their domestic economies as governments forced their citizens to stay at home so they could try and contain the disease's spread. 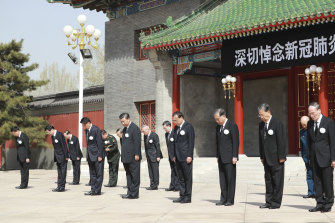 Chinese President Xi Jinping, fourth from left in front row, with other Chinese leaders during national mourning for victims of coronavirus at the Zhongnanhai Leadership Compound in Beijing on Saturday, April 4.Credit:Xinhua via AP

And it singled out Prime Minister Scott Morrison's unprecedented $130 billion in government support for workers and businesses, saying Australians too were owed at least that amount in compensation.

According to the report, Coronavirus Compensation? by conservative London think tank The Henry Jackson Society, China could be sued under 10 possible legal avenues, including the International Health Regulations, which were beefed up after the SARS outbreak, which China also tried to cover up.

The report said had China provided accurate information at an early juncture, "the infection would not have left China."

China only reported the disease to the WHO on December 31 and said there was no evidence of human-to-human transmission.

Yet whistleblower medics, including Li Wenliang, who were reprimanded for raising the alert. Some were confident the disease was spreading between humans before this date.

Reporting by the South China Morning Post has cited Chinese government documents that identified nearly 200 cases of coronavirus by December 27.

The International Health Regulations says nations must monitor and share data related to the spread, severity, and transmission of any pathogens that are potentially transmissible internationally.

The Henry Jackson Society said China had done the opposite, by covering up data and punishing doctors who sought to tell the truth.

It urged a coalition of countries to launch joint-action because of China's record of "responding aggressively to threats on the world stage."

"Taking action would require both courage and global solidarity," the report said.

"In its early response, Wuhan and Hubei breached [International Health] Regulations…responsibility goes to the top of the regime.

"It appears more than probable that the Chinese Communist Party’s response to COVID-19 was in breach of international law," it said.

The report said that while levelling a claim of dispute under the International Health Regulations would be unprecedented, there was an initial framework within the structures of the WHO for bringing such a suit.

Other options could involve using the International Court of Justice and Permanent Court of Arbitration, The World Trade Organisation, bilateral investment treaties and even the United Nations Convention on the Law of the Sea.

Domestic courts and Chinese courts could also be possible avenues, the report said.

Report co-author Matthew Henderson said the Chinese people were also the victims of their government's negligence.

"They are innocent victims, like the rest of us. This is the fault of the CCP," he said.

"The Chinese Communist Party has learnt no lessons from its failure in the SARS epidemic.

"Their repeated blunders, lies and disinformation, from the start of the COVID-19 epidemic, have already had far more deadly consequences.

"By computing the cost of damage caused to advanced economies and assembling a series of possible legal processes to which the rules-based order can have recourse, we offer a sense of how the free world might seek recompense for the appalling harm the CCP has done," he said.