Each day, the Department of Health releases figures on the number of people who have died in hospital from Covid-19. 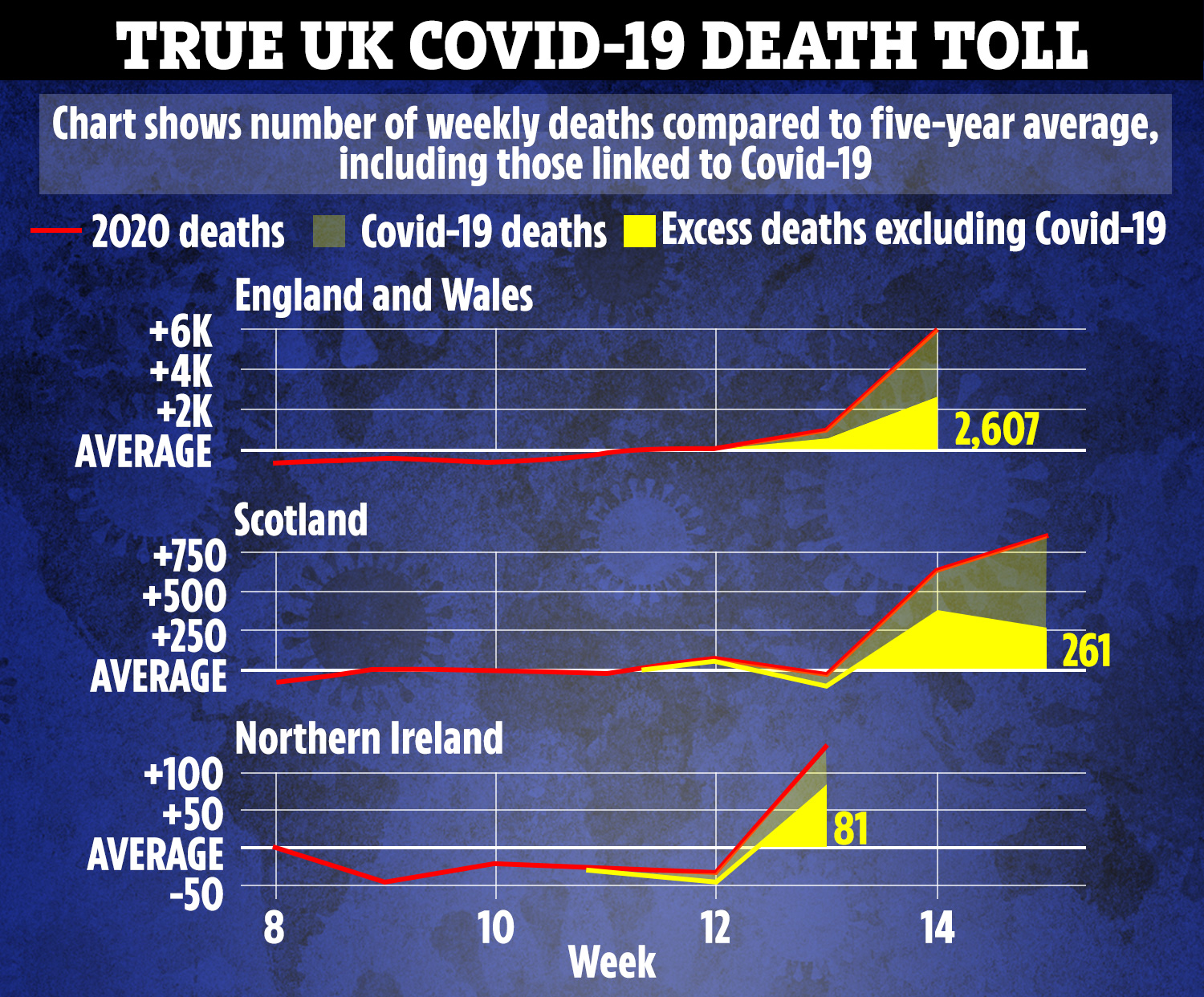 But they don't account for those who have died in care homes, hospices or in their own houses and only give a snapshot of what's happening in wards across the country.

The Office for National Statistics (ONS) has begun putting out data on the total number of people who have died from coronavirus.

However, it takes at least five days between a doctor certifying a death and it being registered, which means it can take weeks until the true scale of deaths becomes apparent.

To get a better handle on the toll, analysis of the total number of deaths – including those not linked to coronavirus – each week in the UK might give a better insight.

Figures show that the number of excess deaths reported across the country is now higher than the five-year average.

That's more than 6,000 than in same week of any given year when there is usually an average of around 10,305 deaths, according to the ONS.

Of those deaths, 3,475 had Covid-19 registered on the death certificate, which leaves 2,607 unexplained excess deaths.

Professor Sir David Spiegelhalter, a statistician at the University of Cambridge, said the spike was "incredibly vivid".

He told the Telegraph: "I don't think I've ever been as shocked when I've looked at something, particularly as just over half of that spike were death certificates with Covid written on them," he said.

"We knew there was going to be a pump in Covid-registered deaths. I hadn't expected such a huge number of deaths which didn't mention it on the death certificate."

It's thought that the unexplained deaths are likely to be related to Covid-19, but have not yet been detected. 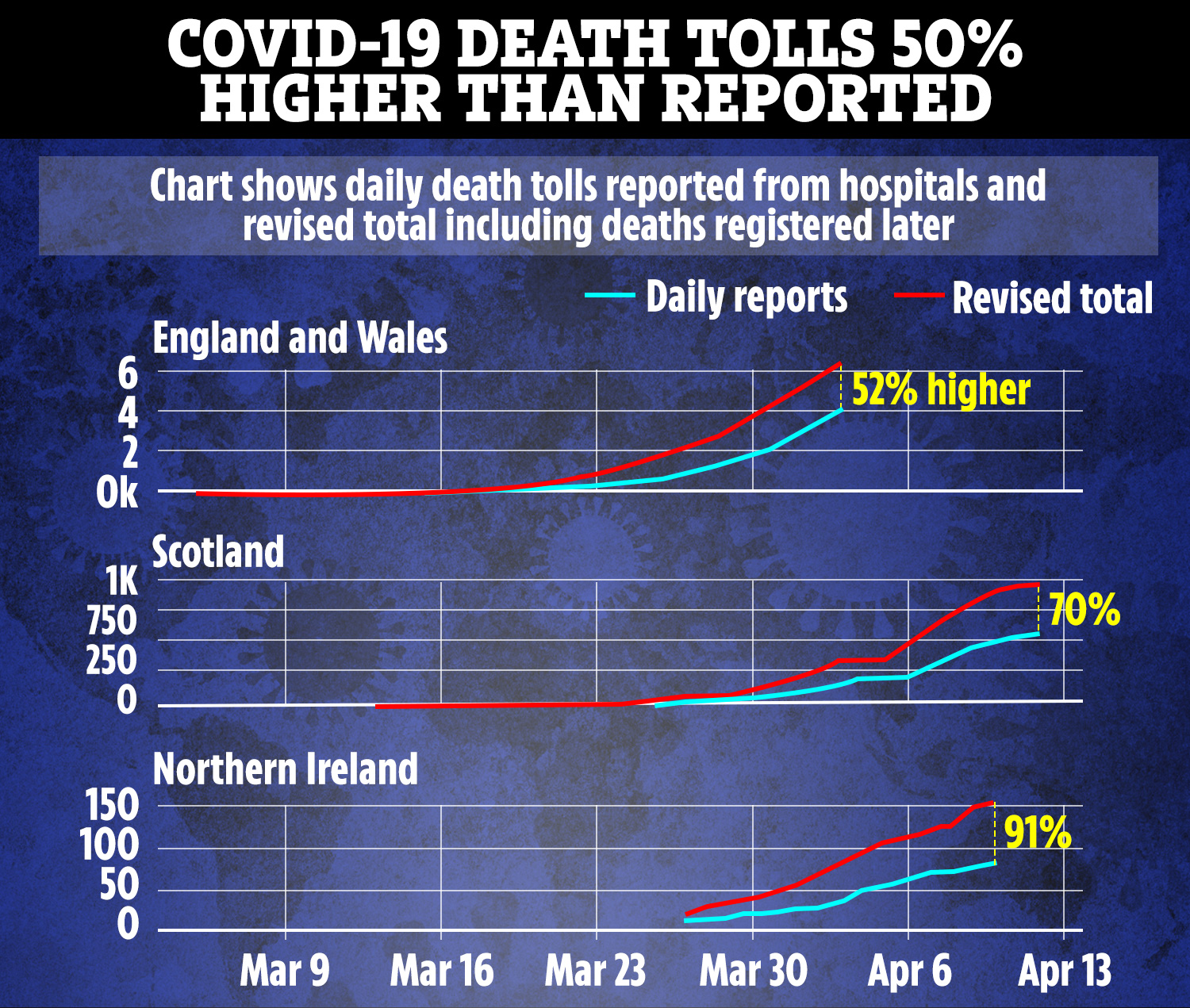 These are understood to be deaths in care homes, where many residents die before a doctor can examine them, or deaths from unrelated illness.

A similar situation is being reported in Scotland and Northern Ireland, with more excess deaths beginning to be associated with Covid-19.

In Scotland, where death registration is a faster process, coronavirus deaths equated to around 46 per cent of all excess deaths in the week up to April 3.

By the following week, it was almost 70 per cent.

Tom Dening, a professor of dementia research at the University of Nottingham, said there are a number of reasons why these unexplained deaths are occurring.

The first is that many of them are undiagnosed cases of Covid-19 – due to a lack of testing outside hospitals, he said.

He added: "There are probably multiple reasons for other deaths. These include people not feeling able to attend their GP surgeries, call an ambulance or attend A&E as they may have done in the past. Therefore, some serious conditions may present too late for effective treatment.”

Another possibility is that some people with serious conditions, such as cancer, are either unable or unwilling to attend hospital on the usual regular basis, so their treatment regimes may lapse.

Pre-existing conditions may also cause complications when it comes to recording the cause of death as it can be unclear whether the virus was the direct killer or that it exacerbated symptoms.

Jason Oke, a senior statistician at the Nuffield Department of Primary Care Health Sciences in Oxford, says there may well be more unreported cases where Covid-19 was involved in the death but the individuals were never tested.

Researchers and authorities may be able to fill some of these gaps in the future by tapping into the NHS’s 111 call log, he said.

He told Wired: “Obviously, if there's no trace of it, if they've never phoned 111, they've never contacted their GP, then I suppose they could get missed." 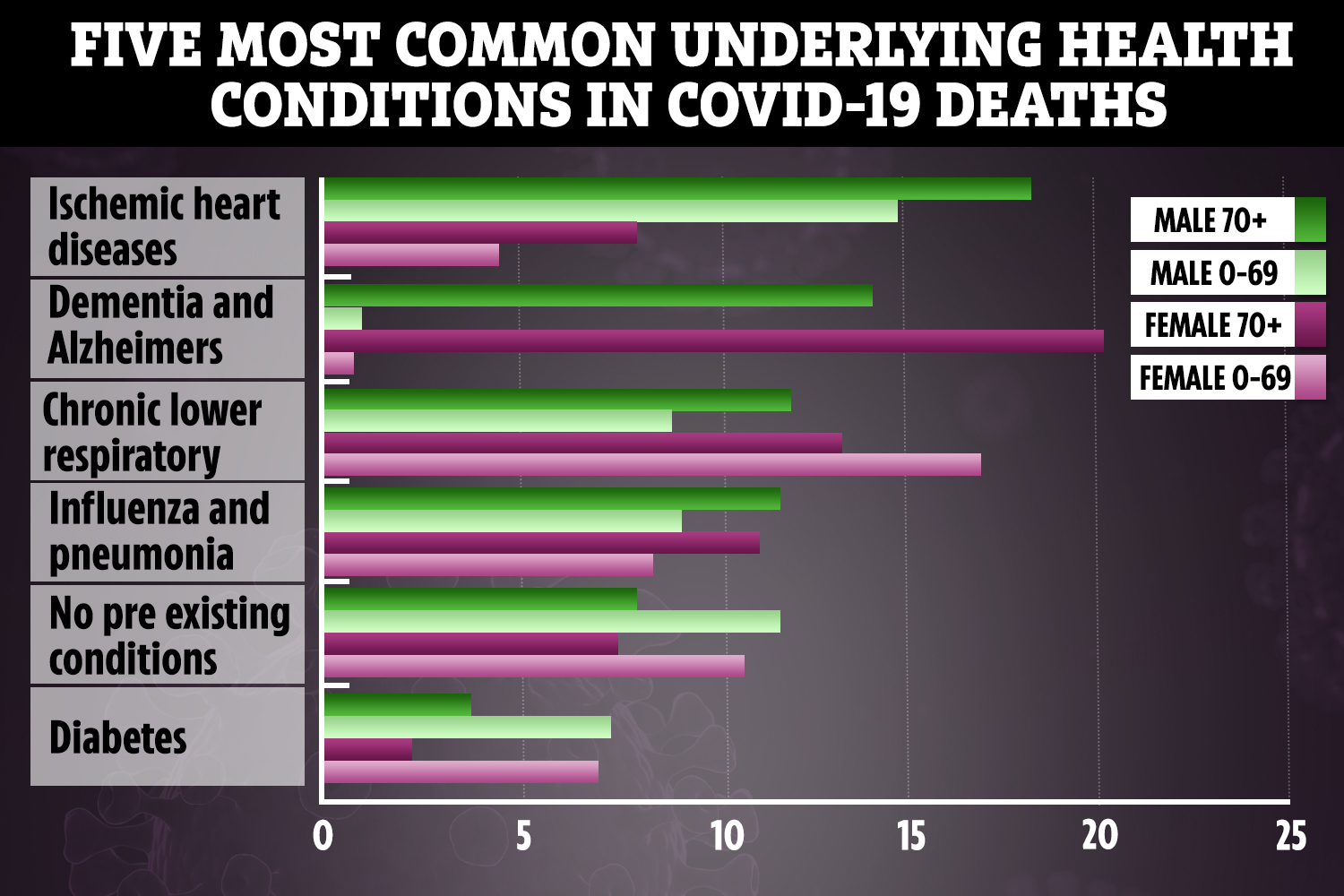 The ONS figures show 6,235 people had died of coronavirus by April 3, which is 15 per cent higher than previously reported.

The latest data shows there were 217 care home deaths linked to coronavirus – ten-times more than the 20 reported at the end of the previous week.

Industry bosses highlight the two week lag in reporting and claim the tragic toll among elderly care home residents is now likely to be in the “thousands”.

Experts reckon they could even account for half of all Covid-19 fatalities.

It comes as the UK coronavirus death toll today rose to 16,509 after 449 more fatalities were recorded in the lowest increase for a fortnight.

The last time the daily death toll was that low was two weeks ago on April 6 when 439 fatalities were reported.

While there is often a drop in Monday’s figures due to a lag in reporting over the weekend, the new tally comes as a government adviser yesterday said the UK had probably passed the first coronavirus peak.

However, infections have continued to grow with 4,676 positive tests bringing the total number of cases to 124,743, according to the Department of Health. 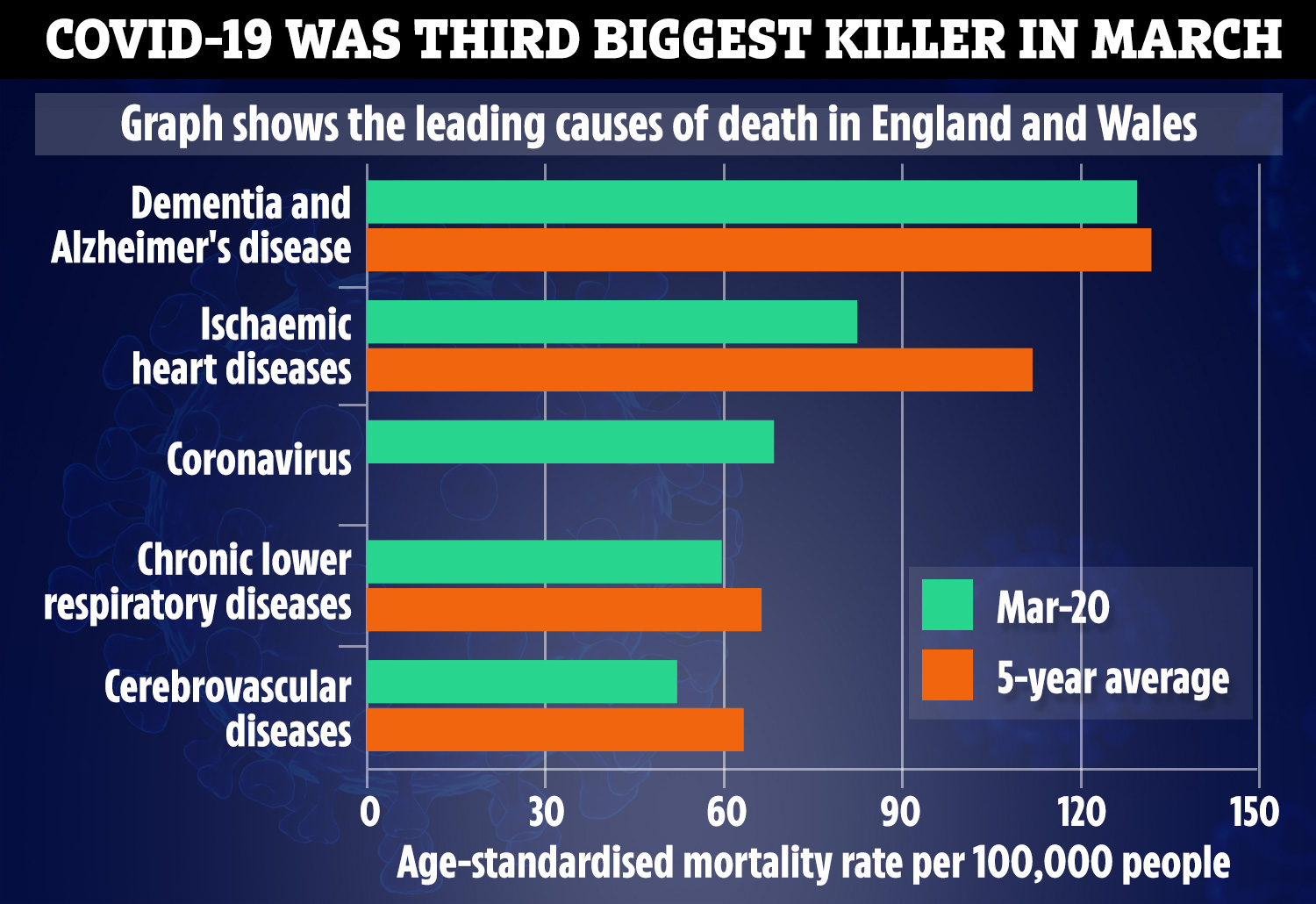 We are urging Sun readers to sign a petition calling for our NHS staff to be awarded the George Cross.

We are backing a proposal by Lord Ashcroft to honour our health heroes with the gallantry gong given for acts of bravery that did not take place in battle.

A No10 spokesman said: “The NHS is doing a fantastic job and the nation will want to find a way to say thank you when we have defeated this virus.”

SAS hero Andy McNab added: “The award of a George Cross would show an emotional appreciation.”

We are asking our readers to please sign the petition below.