A log of emergency calls has revealed that South Korean authorities took almost four hours to respond to the Halloween stampede that killed 156 people in Seoul’s Itaewon district.

South Korean Prime Minister Han Duck-soo vowed on Wednesday to hold police accountable for the deadly crowd surge, after transcripts showed they were slow to react to incoming calls.

The first emergency call was made at 6:34pm, a nervous caller warning that police needed to control the crowd before the crush of people turned deadly.

‘People can’t walk down here but people keep coming up. I feel like people are going to get crushed to death. I barely got out of it. I think you need to control the situation,’ the first transcript read.

Officials had earlier said the first call to the fire department about the crush was received at 10:15pm Saturday, but the transcripts show someone called the police emergency hotline at 6:34pm asking for help. 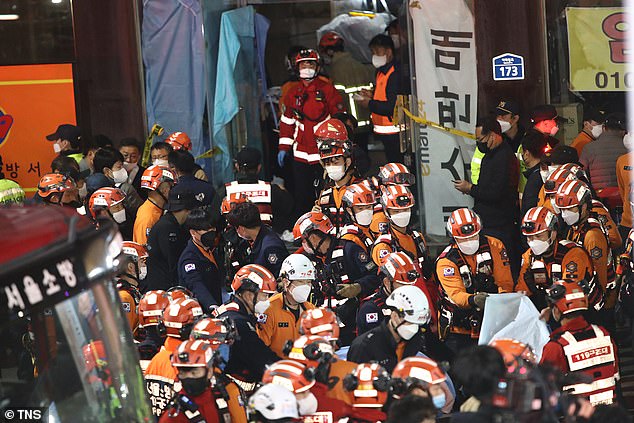 Emergency services are pictured gathering on October 30, the night 156 people were killed and 100 injured in a Halloween stampede in Seoul’s Itaewon. Officials said the first call to the fire department was received at 10:15pm on the Saturday night, but the transcripts show someone called the police at 6:34pm asking for help 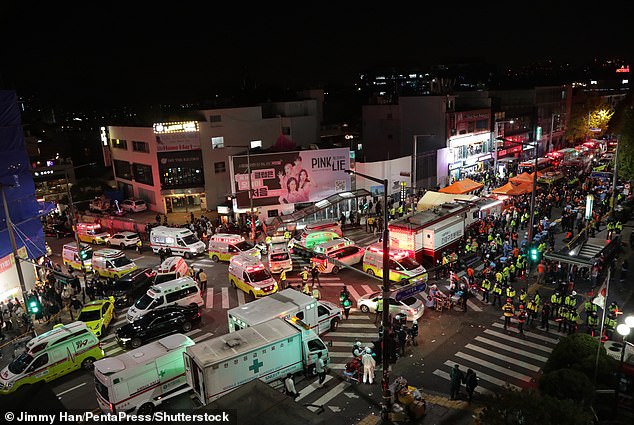 Responders are photographed after calls started coming through. As many as one hundred thousand people gathered to enjoy Halloween parties in the nightlife district of Itaewon. A wide-ranging probe is under way into the exact cause of the crush

What follows is a condensed transcript, obtained by AFP, of about a dozen of those increasingly desperate calls to police:

6:34 pm (0934 GMT) ‘This is getting really nervous with people coming up and down this alleyway. People can’t walk down here but people keep coming up. I feel like people are going to get crushed to death. I barely got out of it. I think you need to control the situation.’

8:09 pm ‘There are too many people here being pushed, trampled, hurt. It’s chaotic. You need to control this.’

8:33 pm ‘People are trampled on the streets here. This is getting dangerous… There’s no control and a three-way road is all blocked. I have a video shot. Can I send it to you?

8:53 pm ‘People are almost getting crushed to death… There are too many people… This is not a prank call.’

9:00 pm ‘Situation here is on the verge of falling into a major accident with too many people. You need to come to put it under control.’

9:02 pm ‘People are being pushed hard here and everyone is in panic… Please do something about making space here. I think people are going to die here.’

9:07 pm ‘I am at the risk of being crushed to death with so many people here… I please ask you to direct one-way traffic here.’

9:10 pm ‘Situation here is really serious. People inside the alley are getting pressed so hard… This is not just a store area. The whole alley is (in danger).’

‘I got it. We will deploy policemen there,’ a police responder told the caller.

9:51 pm ‘There are too many people here. Can you come out here as soon as possible for crowd control?’

10:11 pm ‘It looks like people are getting crushed to death there… total mayhem.’

An estimated 100,000 people had flocked to the area, but because it was not an ‘official’ event with a designated organiser, neither police nor other local authorities were actively managing the crowd.

‘When each citizen makes an emergency call, it is when they are very urgent and in dire need of help or action from the police,’ Prime Minister Han Duck-soo told a government meeting.

‘The government will sternly hold accountable those who were responsible as soon as the investigation is completed,’ he said.

A wide-ranging probe is under way into the exact cause of the crush, and an investigative team on Wednesday raided multiple police offices, including in the district where the disaster happened.

‘The special investigation team is conducting a raid on eight agencies including the Seoul Police Agency, Yongsan Police Station and the Yongsan Gu Office,’ a spokesman for the national police agency told AFP.

The government also said Wednesday it would revamp the police’s 112 emergency call service.

‘The government will do its best to create a safer society by using this accident as a lesson,’ said Park Jong-hyun of the Ministry of the Interior and Safety.

The emergency call transcripts show how desperate members of the public repeatedly flagged dangerous overcrowding for several hours before the crush happened.

A handful of top officials including the police chief, Seoul mayor and the interior minister issued public apologies on Tuesday, admitting they had failed to prevent the fatal disaster.

The ruling party on Wednesday proposed launching a special committee including opposition parties and independent experts to investigate the crush.

‘There should be answers as to why police made a wrong judgment,’ said Chung Jin-suk, interim leader of the People Power Party, according to Yonhap news agency.

‘Minimising, covering up and manipulating to stave off responsibility will never be forgiven,’ Lee told a party meeting.

‘The attitude of top government officials is not that of those who are trying to take responsibility.’

South Korea is observing a week of national mourning until Saturday, with entertainment events cancelled and flags flying at half-mast. 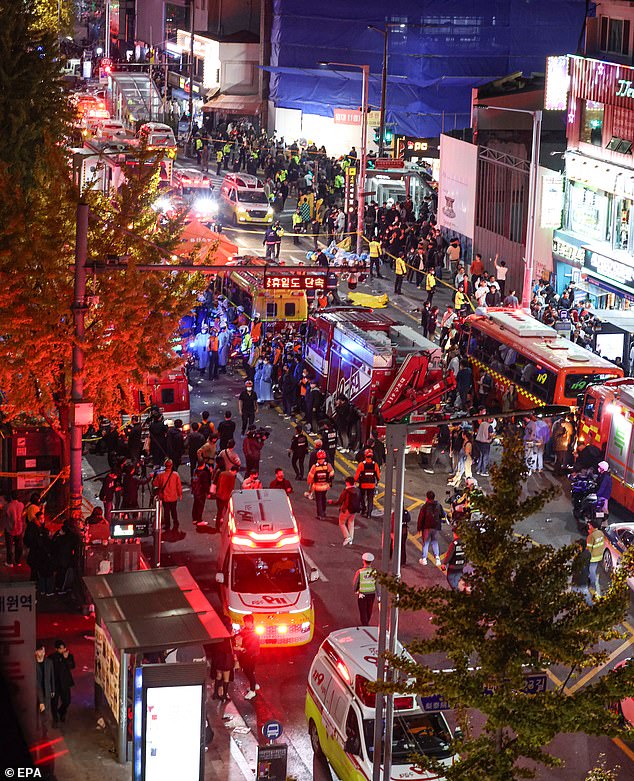