Fox News correspondent Bryan Llenas has the latest on protesters taking to the streets in New York.

The marchers started from Brooklyn’s Barclays Center sports arena around 7 p.m. ET before moving across the bridge.

At one point, the protesters took a knee and held a moment of silence on the bridge in deference to the two men killed by Rittenhouse last year in Kenosha, Wisconsin. Earlier Friday, a Wisconsin jury agreed with Rittenhouse that the killings were in self-defense.

But the New York crowd disagreed with the jury’s decision. 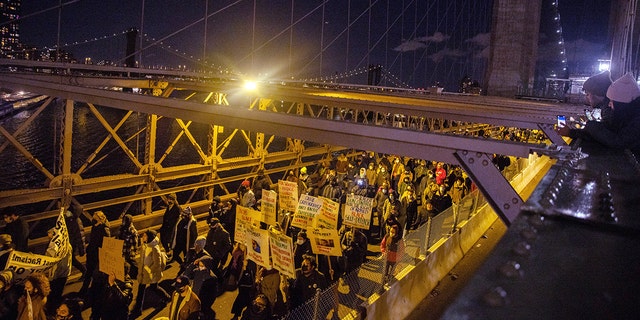 Demonstrators marched across the Brooklyn Bridge on Friday in protest of Kyle Rittenhouse’s acquittal.
(Associated Press)

The 18-year-old defendant had faced several felony charges, including intentional homicide, and years in prison, if he was found guilty of fatally shooting two men and wounding a third during Black Lives Matter protests and riots last year in Kenosha, Wisconsin. The unrest followed the police-involved shooting and wounding of Jacob Blake. 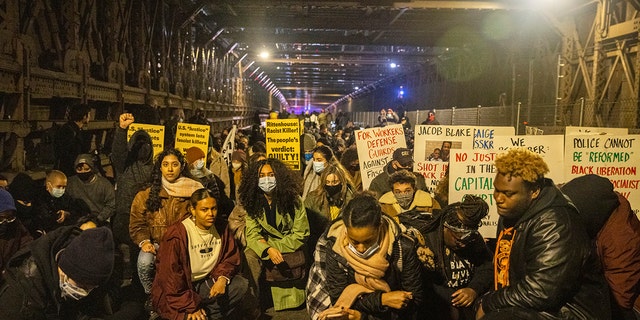 Rittenhouse was found not guilty on all of the charges he faced.

“This sets a scary precedent, you know, and I’m not, I’m not sure what to do as, like, a regular person so I just made this sign,” protester Phoebe Helander told the station.

A protest leader told demonstrators who gathered that they needed to stay engaged and come to future protests because Black lives were “still mattering and they’re still going to be shot down.”

The protest remained peaceful and no arrests were reported.

In Queens, at least five people were arrested for property damage.

“The NYPD takes its responsibility to protect the 1st amendment rights of peaceful demonstrators seriously,” the department wrote on Twitter. “Just as important is the safety of NYers & the protection of property from people breaking the law in the name of protest. As seen tonight in Queens, they will be arrested.”

The NYPD tweeted photos of a smashed windshield and graffiti on the back of someone’s vehicle that said: “F— you.”