Britons still back the Oxford-AstraZeneca Covid vaccine – as 75 per cent tell pollsters they consider it to be safe.

Officials have launched a campaign to maintain confidence in jabs after medical regulators advised that under-30s should be offered an alternative to the Oxford inoculation amid blood clot fears.

And, as the Health Secretary looked to dispel concern by insisting that spotting rare side effects shows ‘the safety system’ is working, a poll revealed that 75 per cent of Britons think the vaccine is safe to use.

While the results by YouGov show a drop of two percentage points since March, it ranks close to opinions of the Pfizer-BioNTech vaccine which 78 per cent dubbed safe, The Times reports.

Nearly two thirds of those aged 18 to 24 felt the vaccine was ok to use, while just 13 per cent of all people polled deemed the AstraZeneca jab unsafe. 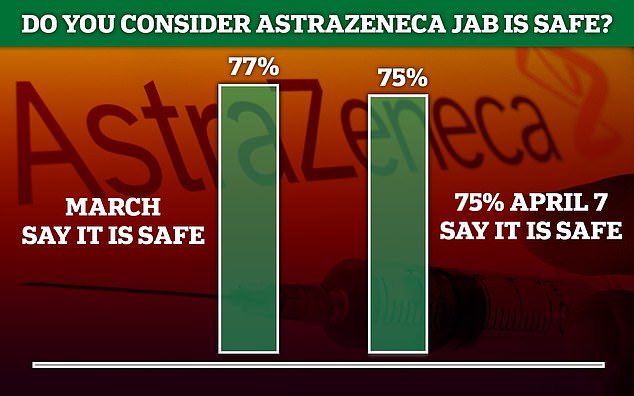 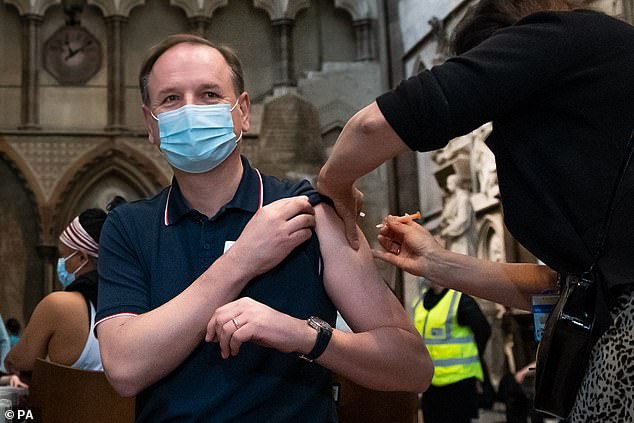 It comes after ministers urged Britons to ‘do the right thing for their country’ and get vaccinated – as figures revealed the jab has saved 10,400 lives.

Tens of thousands turned up at ‘heaving’ vaccine centres, calming fears that uptake could be dented by concerns over rare blood clots.

Mr Hancock said that, while getting Covid-19 could ‘essentially ruin your life’, the small risk of developing a blood clot from the jab was the same as from taking a long-haul flight. 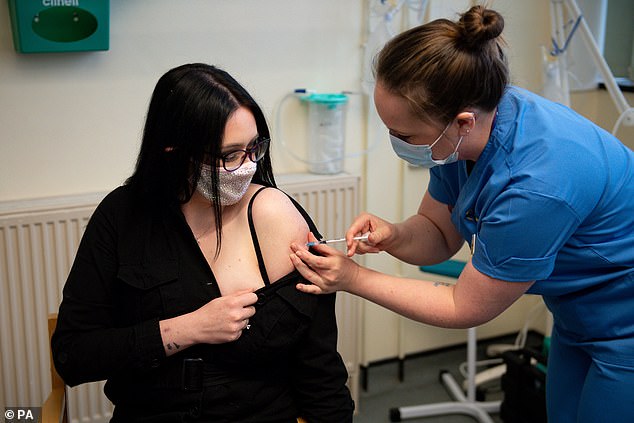 Elle Taylor, 24, an unpaid carer from Ammanford, receives an injection of the Moderna vaccine

By ELEANOR HAYWARD AND STEVE DOUGHTY FOR THE DAILY MAIL

Fewer than 100 virus cases a day are now occurring in the over-70s as almost all have immunity to Covid, official figures show.

Public Health England found that 93.5 per cent of people aged 70 to 84 tested positive for antibodies by mid-March – up from 41 per cent a month earlier.

Department of Health data found infections in the over-70s have fallen below 100 for the past two days – down from more than 6,000 cases a day in January.

The number of adults in their 60s with antibodies has trebled to 61 per cent in a month, PHE said.

Across all age groups, 46 per cent of the population in England now have antibodies to Covid.

Antibodies are made by the body following vaccination or infection and they protect against reinfection and serious disease.

The PHE report found weekly case rates and hospital admissions are falling in all regions and age groups.

Dr Yvonne Doyle, medical director at PHE, said: ‘We have come a long way since the start of the year, and the terrible peak we saw during the winter.

‘Whatever your plans next week, please remember to follow the rules and take up your vaccine when offered one. Let’s not blow it now.’

Yesterday another 3,030 cases and 53 deaths were recorded.

Data from the Office for National Statistics revealed the number of weekly coronavirus deaths has fallen 92 per cent from the second wave peak.

There were just 719 deaths from Covid-19 registered in the week ending March 26, down 24 per cent from the previous week and down from 8,433 in the final week of January.

And a new study by Public Health England found the rollout has prevented 10,400 deaths in over-60s since the first jab was given to Margaret Keenan on December 8.

PHE compared the number of Covid-19 deaths until the end of March with the expected number had millions of over-60s not been immunised.

Mr Hancock said: ‘That’s more than 10,000 families who haven’t suffered the loss of a loved one.

‘The science is clear – vaccines save lives. All three of our approved vaccines have been deemed safe and effective by our world-class independent medicines regulator.

‘The figures published today show why it’s so vital people get their second dose too. When people get the call, they should get the jab.’

On Wednesday UK medical regulators concluded the AstraZeneca vaccine was a ‘reasonably plausible’ cause of 79 cases of unusual blood clots, including 19 deaths.

The NHS has now cancelled thousands of appointments for those aged 18-29 who were booked in to get their first dose of the AZ jab.

Most under-30s are not yet eligible but those who are, such as unpaid carers, will be rebooked with a Pfizer or Moderna vaccine.

The new advice from medical regulators has led to fears younger adults could shun the jab.

Professor Jeremy Brown, a member of the Joint Committee on Vaccination and Immunisation, urged the young to get vaccinated so they can go on holiday and see relatives again. Despite the setback with the AstraZeneca jab, the Government is on track to meet its target of offering all over-50s their first dose by April 15.

Yesterday NHS data revealed 90 per cent of people in their 50s have now been vaccinated. So far 31.8 million people in total have had at least one dose of the vaccine, and six million both doses.

More than 500,000 jabs were delivered on Wednesday, despite concerns over a squeeze on supplies.

Officials are trying to ensure those who have had their first AZ dose still come forward for their second. Regulators have found no reports of clots after second doses.

Yesterday, there was little sign that warnings over the blood clots have knocked vaccine confidence. Professor Anthony Harnden, deputy chairman of the JCVI, insisted ‘the vaccination programme is going full steam ahead’.

A volunteer at the Tessa Jowell vaccination centre in East Dulwich, south-east London, said it had been ‘heaving’. She added: ‘It’s been constant all day. We have had really good turnout.’

Those getting their jab yesterday largely rejected fears over blood clots, although some younger adults did reject the AZ jab.

Mr Styring, 76, said: ‘The benefits of any jab outweigh the risks by a long way. I wouldn’t be concerned about the AstraZeneca. It’s a tremendous relief to be vaccinated. We’ll celebrate by hugging our grandchildren in a short while.’ 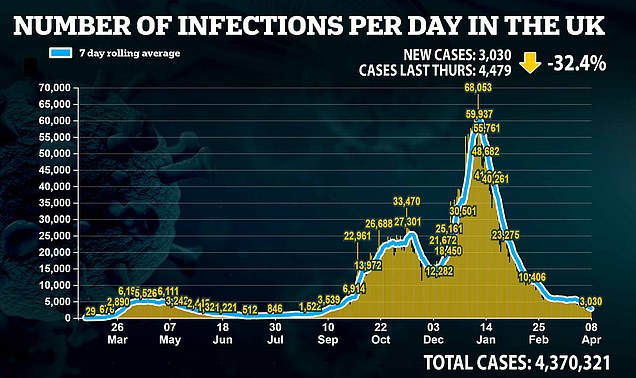 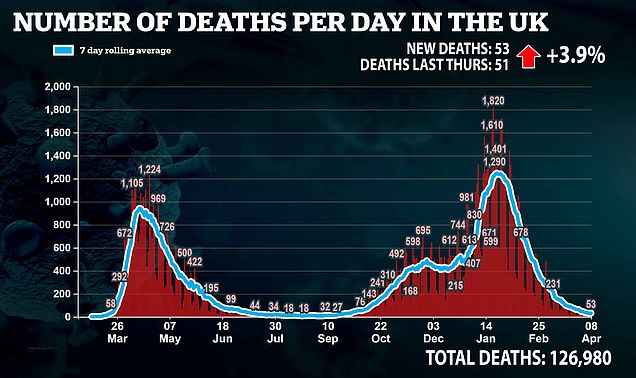 Health chiefs announced another 53 deaths, which was two more than the same time last week 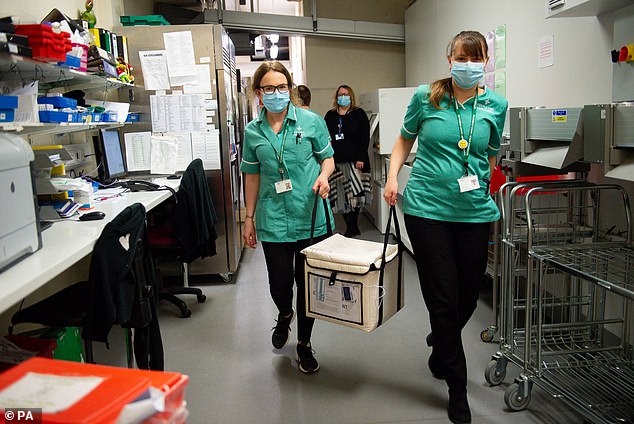 However, one 39-year-old woman walked away from her appointment in Ealing after seeing the only jab was from AstraZeneca.

Veronica, a finance administrator who did not want to give her surname, said: ‘I’m scared after seeing the possibility of what could happen. Many of my friends think the same. They are a bit worried.’

And one GP in Surrey, Dr David Triska, said some patients are now cancelling their AZ jab.

He said: ‘We have been inundated with consultations relating to headaches and people defaulting their AstraZeneca appointment to try to get another vaccine. We are reassuring them the balance of risk is in favour of receiving the vaccine.’