‘Britain benefited hugely from the Raj and needs to pay India back’: British mother stuck in coronavirus lockdown in Goa begs for UK government help as she and her four children run out of food and face ‘brutality’ on the streets

A British mother stranded in India fears her children will go hungry during the country’s strict coronavirus lockdown as they plead with authorities to fly them home.

Gabrielle Marshall, her husband and their four children have been living in Patnem, Goa, for six months after taking them out of school for a year.

But after President Narendra Modi banned people from leaving their homes with just four hours’ notice on March 23 and grounded all domestic and international flights, they are running out food and clean water and are desperate to get back to the UK.

She claimed that police are beating people for being outside and the few supermarkets still open are mobbed with crowds of people with no social distancing.

The mother-of-four is terrified of her family catching the virus and fears the death toll could be worse than Italy.

She told The Times: ‘Currently migrant workers are walking home via state highways and the virus will inevitably spread fast [given] the crowds gathering to collect food.

‘Hunger is more pressing compared to the fear of the virus for many. We need to be repatriated, and urgently, while we still have a window.’

The Marshall family originally planned to travel north to see other parts of India, but now they just want to go home.

She told the Today programme: ‘It’s the concern of getting food. Initially we were told we could get food from shops, but now the shops are closed.

‘There were reports of police beating people for being outside.

‘The food is beginning to get through after getting stuck at the border, but we’re scared to go out and get it over fears of police brutality.

‘When you do go to large shops, you’ve got 60 people outside one shop with very little sign of social distancing, which is a really worry in terms of health.’ 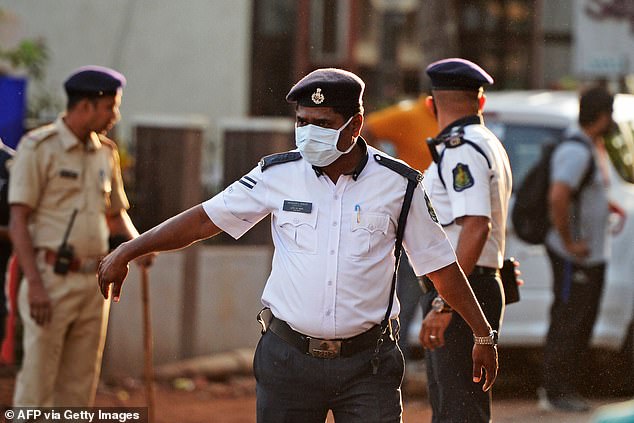 Police are pictured wearing facemasks in Goa, where British mother Gabrielle Marshall is stuck with her family 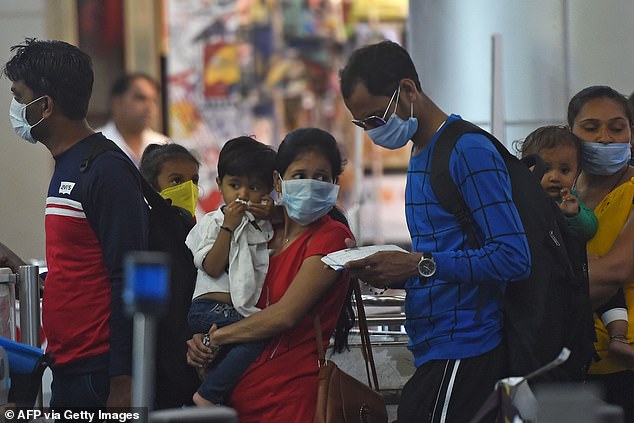 She added that clean drinking water is becoming very scarce, saying bottles in shops are almost impossible to find and they are unable to filter tap water properly.

There are 1,251 reported cases of coronavirus in India and 32 deaths from the infection.

But with reporting difficulties and migrant workers spreading the virus from urban areas to more rural parts, the actual figures are believed to be much higher.

Mrs Marshall said: ‘If you look at what’s happening in Italy, with a population over 1.3billion, the numbers here are going to be more like 1million.

‘Our concerns really are health – if we get sick – how are we going to get help, with such a low ratio of doctors to people.’

Their other worry is how they’re going to get back to the UK.

She added: ‘They [Foreign and Commonwealth Office] have been saying for two weeks now that they’re working on it.

‘What the hell does ‘working on it mean’. Why is there this problem with picking up the British people? 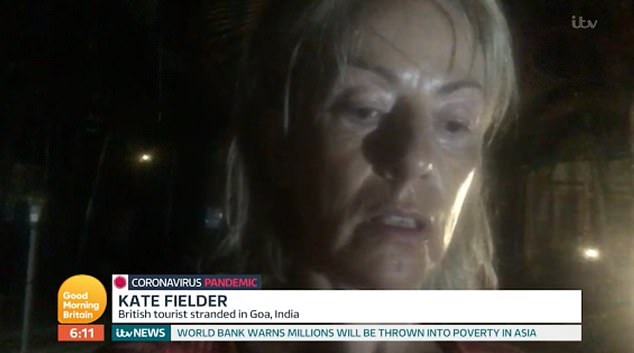 ‘I have friends that left on the German flight, next it’s the Poles.

‘It would be really helpful for our state of mind to know what they’re doing and when they’re going to do it.

‘I know of four people who think they might have the virus in this area.

‘There’s no testing. The numbers are just going to get bigger and bigger.

‘Getting enough food is not a problem the west have to deal with. Yes they have coronavirus but they don’t have to worry about starvation.

‘We have a humanitarian crisis on our doorstep. The British Government benefited hugely from the Raj financially and needs to start paying India back.’

There are thousands of Britons currently stranded abroad amid the global coronavirus crisis.

Kate Fielder is also stuck in Goa and told Good Morning Britain today: ‘The Russians, the Poles, the Germans, the Italians and the Israelis ahve all been repatriated.

‘All the meanwhile, I’ve just heard a load of nonsense about what Dominic Raab is going to. But the reality is I’m still stuck here.’

FCO advice to those stuck in India reads: ‘We are working with the Indian authorities and airlines to support British nationals who want to leave India and return to the UK.

‘To support this we need to collect information on British nationals currently in India to advise when commercial flights to the UK become available.’

He said the UK government will now step in to provide ‘special charter flights’ from parts of the world where commercial flights are no longer in operation.

The government has struck a partnership deal with British Airways, Easyjet, Jet2 and other airlines to provide the planes for the effort, he added.

Speaking at the government’s daily coronavirus press conference at 10 Downing Street yesterday, Mr Raab said: ‘Under the arrangements that we are putting in place we will target flights from a range of priority countries, starting this week.’

But Mr Raab said in countries where commercial flights are still in operation, the instruction is still for Britons to buy tickets home ‘as soon as possible’.

‘Where commercial routes remain an option, airlines will be responsible for getting passengers home,’ he said.

‘That means offering alternative flights at little to no cost where routes have been cancelled.’

MailOnline has contacted the Foreign and Commonwealth Office for comment.

A dive-obsessed British family relocated to Thailand a week before coronavirus chaos closed down the country –  and now they are homeless and unemployed.

Lauren Edwards immigrated to Koh Phangan with husband Greg Wiseman, 45, and their two boys Ifor, three, and Gryff, one, on March 2.

Having worked on the island as dive instructors in 2015, the pair thought they knew what island life would involve.

But three days after Greg started his job as a dive instructor, all the island’s businesses closed due to coronavirus. 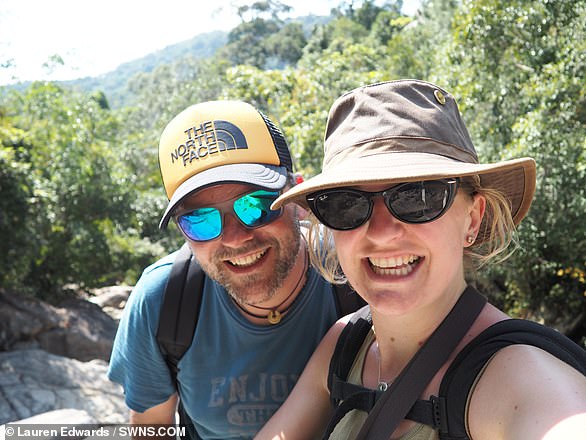 Lauren Edwards immigrated to Koh Phangan with husband Greg Wiseman, 45, (pictured together) and their two boys Ifor, three, and Gryff, one, on March 2

Lauren, 29, said: ‘It’s kind of Chinese whispers at the moment – it’s hard to get reliable information so we are on a beach and kind of in a little bubble at the moment, and trying to think of what to do next.’

‘We were living in Devon and decided to just have a complete change so we sold everything. We really wanted to do something fun and adventurous before the boys got to the age where we were really stuck, like they needed to be at school.

‘Initially we decided to do a little bit of round the world travel – we thought that Greg could dive in places and earn a bit of money, and I could teach some English.

‘Then he got offered the job back with the company we had worked for before and we were like ‘okay, we’ll go and base ourselves there for a while.’

‘We know the island – we know that there’s infrastructure, we know there’s hospitals and pharmacies so it was kind of piece of mind with two young children, knowing where we’re going. 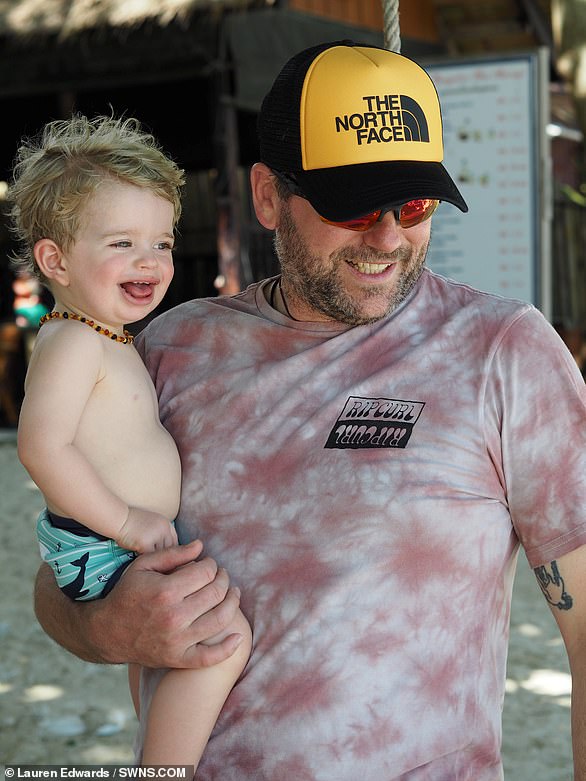 ‘That’s what brought us here – knowing roughly where we were going. Our plan after this, if we had funded ourselves, would be maybe to go on to somewhere else.

‘But three days after he started work, everything got shut down. Now we’re not sure what it’s going to bring – if we use all the money that we had put by then we will just have to come home.

‘The plan was to be self-sufficient – we planned on earning some money. But it’s deadly quiet – the beach that we’re living on, Thong Nai Pan Yai, 20 resorts are spread along that little village and one of them is left open.

‘For a while we thought we’d ride it out and then it got much more serious back in the UK and we weren’t that sure what to do. However we thought if we go home, we have no home.’ 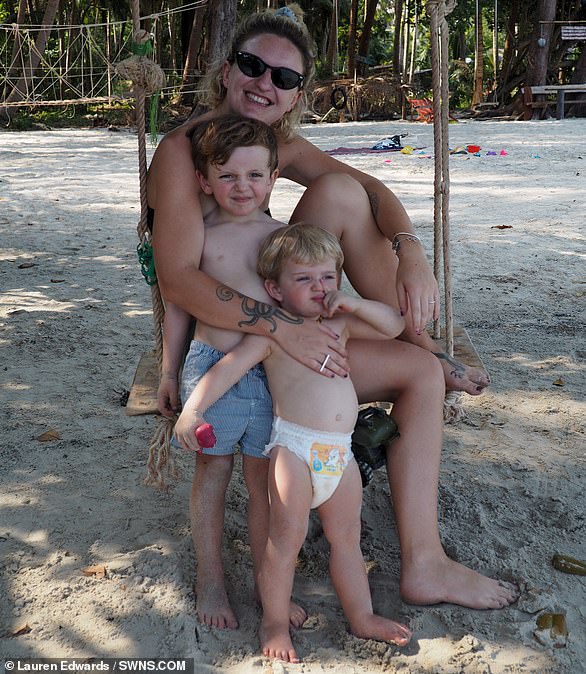 After three weeks the pair decided it was best to return to the UK – but they had sold everything ahead of the move, including their home in Exeter and their car.

Living with their family was not an option either.

Lauren said: ‘My mum has been working at a school, but obviously now they’re locked up.

‘And Greg’s parents are in their mid-70s so we couldn’t really go to them.

‘So we just decided that we might be better to stay here – as far as we know, there’s only been one case of coronavirus on the island.

‘We’re trying to make ends meet here by teaching a little bit of English online, but it’s sort of $8-$10 dollars a day.

‘We can cover a little bit of our costs but it’s hard – it’s hard to know what to do. We go in waves – we go from thinking ‘we’re in the best place, this is fantastic, we’re doing the right thing for the boys and we’re safe.’

‘And then we think ‘what happens after all of this, what happens in 30 days or if we’re stuck here for two or three months.’ We’ll have no money left by that point.’

The pair have been able to extend their visas, they claim thanks to a letter from the British Embassy that asks for British citizens to be allowed to stay an extra 30 days. 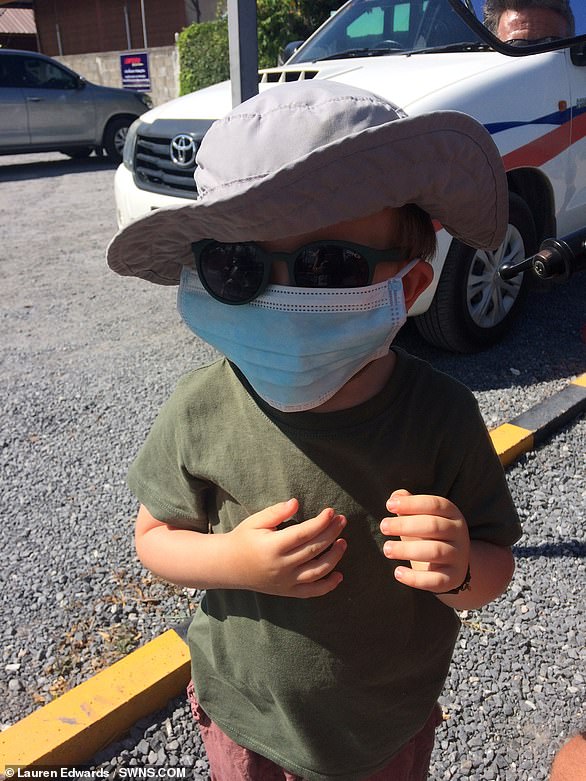 Little Ifor, three, is pictured wearing a facemask to protect himself against the virus

However this came with a £500 price tag – meaning the pair are now eating into the money they had saved to set up their life on the island.

Although Lauren claims the locals have helped them massively: ‘We have got a little house on the beach, purely because the local people have been so amazing.

‘They know that we were here to work and that all fell through. Everyone has been so kind – someone has given us a house for a quarter of what it would be going at.

‘All the restaurants have now closed down but they are delivering food to everybody.

‘We’re really being looked after and it feels like a really nice place to be – but obviously that could change because when businesses start closing down, there isn’t really any government help.

‘Things could potentially turn nasty quite quickly – we don’t really know what the next few weeks hold.’

For the pair, the ideal scenario would be to stay on the island, with business returning to normal.

‘In an ideal world, we will stay here and in a couple of months it will all blow over.

‘The borders will reopen and the dive job will be available again. Realistically after this, I know the economy is going to be really bad and so who knows?

‘We don’t want to come back to the UK because we have nothing there now. We gave up everything. For us to come back, we’d be starting absolutely from scratch.’