Britain should pursue the Chinese government through international courts for £351 billion in coronavirus compensation, a major study into the crisis has concluded.

It comes as 15 senior Tories led by former Deputy Prime Minister Damian Green write to Boris Johnson to demand a ‘rethink and a reset’ in relations with Beijing.

The first comprehensive investigation into the global economic impact of the outbreak concludes that the G7 group of the world’s leading economies have been hit by a £3.2 trillion bill that could have been avoided if the Chinese Communist Party had been open and honest about the outbreak late last year.

Britain’s slice of the compensation sum includes the full cost of Chancellor Rishi Sunak’s economic bailout and hike in NHS spending in response to the crisis. The landmark study also directly highlights crunch British policy decisions made earlier this year – such as not cancelling flights from London to Wuhan in January – that were hampered or directly affected by misinformation from China and the acquiescent World Health Organisation. 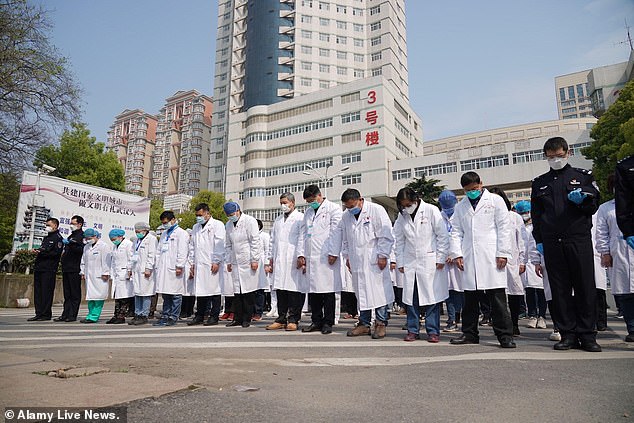 Britain should pursue the Chinese government through international courts for £351 billion in coronavirus compensation, a major study into the crisis has concluded. Pictured: Medical workers in Wuhan pay tribute to those who have died from the virus

The report, to be published tomorrow by the Henry Jackson Society, a British foreign policy think-tank, says there is evidence that China directly breached international healthcare treaty responsibilities, and outlines ten legal avenues major nations could take to pursue damages from them.

Now China has responded by deploying an advanced and sophisticated disinformation campaign to convince the world that it is not to blame for the crisis, and that instead the world should be grateful for all that China is doing. ‘The truth is that China is responsible for Covid-19 – and if legal claims were brought against Beijing they could amount to trillions of pounds.’

Legal avenues include bringing a case at the Permanent Court of Arbitration at The Hague against China for breaking sanitary commitments, going to the UN and International Court of Justice, or the World Trade Organisation.

On the back of the report, four former Cabinet Ministers and 11 other Conservative MPs have jointly written to the Prime Minister to accuse China and demand a ‘rethink’ in relations. Mr Green and ex-Ministers Iain Duncan Smith, David Davis and Owen Paterson say they are ‘concerned about the damage to the rules-based system caused by China’s non-compliance with international treaties.’ 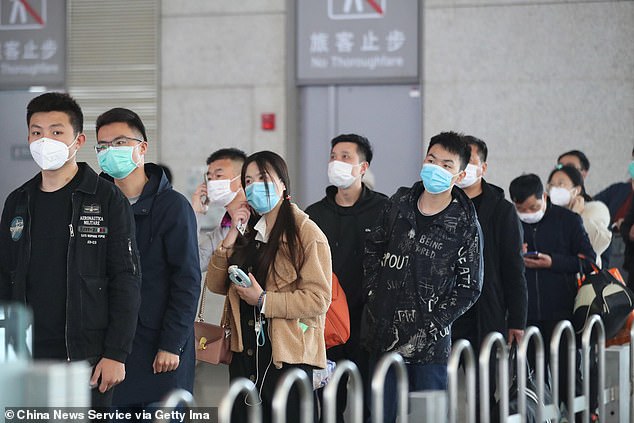 The first comprehensive investigation into the global economic impact of the outbreak concludes that the G7 group of the world’s leading economies have been hit by a £3.2 trillion bill that could have been avoided if the Chinese Communist Party had been open and honest about the outbreak late last year. Pictured: people wear masks in Shanghai

Their letter reads; ‘Legally binding international healthcare regulations require states to provide full information on all potential pandemics. It appears likely that in its early response to the outbreak, the uphold its obligations.

‘This omission allowed the disease to spread throughout the world with extraordinarily serious consequences in terms of global health and the economy. The cost to the UK may be, as a Henry Jackson Society report now suggests, over £350 billion.’

And they demand: ‘Once the crisis has passed, we urge the Government to rethink our wider relationship with China. Over time, we have allowed ourselves to grow dependent on China and have failed to take a strategic view of Britain’s long-term economic, technical and security needs.’

Last night Bob Seeley, a member of the Commons select committee on foreign affairs and who is another of the signatories, said: ‘Once we are through this crisis, we need to reassess our ability to deal with non-traditional threats to our society, be they economic, political or, in this case, a pandemic. We can’t go through this shock again without being better prepared.’

Last week the Chinese Embassy in London launched an astonishing rebuttal of reports in last weekend’s Mail on Sunday that Downing Street had been warned that China’s coronavirus figures were ‘out by a factor of 15 to 40’.

They said British government officials had said the ‘reported remarks do not represent government position’ and the Britain had ‘spoken highly of China’s contribution to the global response’. A No10 source said they were not aware of any conversations taking place. The Chinese Embassy declined to be interviewed by the MoS yesterday.

The trail of misinformation

January 13: First official Whitehall response to Covid-19 – a meeting of the New and Emerging Respiratory Virus Threats Advisory Group (NERVTAG). WHO reports, based on Chinese data, claim no evidence of medics contracting the disease, only 41 cases and no ‘significant’ human-to-human transmission. All of this was untrue. But NERVTAG concludes ‘based on current available information’ that ‘risk to the UK population is considered: Very Low’ and does not recommend shutting borders.

January 21: WHO decides it is not possible to say if disease came from animals and had ‘some’ human-to-human transmission, or had ‘self-sustaining human transmission’. The latter is true and – by this stage – well known in China. NERVTAG moves threat to ‘low’ but notes that it was concluded by the WHO that the ‘currently available data’ did not make it possible to distinguish between the two scenarios.

January 28: NERVTAG recognises, based on a WHO Emergency Committee meeting of January 22, that human-to-human transmission is occurring and says that in a ‘large amount of the data’ from China, provincial information is not given.

January 30: NERVTAG warns that ‘China may not be diagnosing milder cases’. The following day coronavirus reaches the UK.