Dominic Cummings was today branded a liar by No10’s top behavioural scientists for accusing them of being opposed to lockdown rules in March last year.

The former No10 adviser claimed in an explosive meeting with MPs that members of a SAGE sub-group were wrong because they suggested long lockdowns wouldn’t work due to ‘fatigue’ that would see people give up on sticking to restrictions.

A meeting in March last year saw advisers on the SPI-B panel warn that restrictions may be harder to enforce over longer periods of time but experts admitted there was little evidence.

Boris Johnson repeated in his pre-lockdown press conferences in March 2020 that he wanted to make sure decisions were taken ‘at the right time’ and not too soon.

Mr Cummings today said the assumption that people would tire of obeying the rules was ‘obviously completely wrong’.

Members of SPI-B today hit back at Cummings’s claim and said he ‘does not appear to understand the role of SPI-B not the contribution of behavioural scientists’.

One member said SPI-B made it clear fears about crisis fatigue should not be taken as the group’s view nor used as an influencing factor in Government decisions.

A SPI-B file from March 12 showed the group was worried it would be portrayed this way and said: ‘We are concerned our comments about the difficulty of maintaining behaviours should not be used as a reason for not communicating with the public about the efficacy of the behaviours.’ 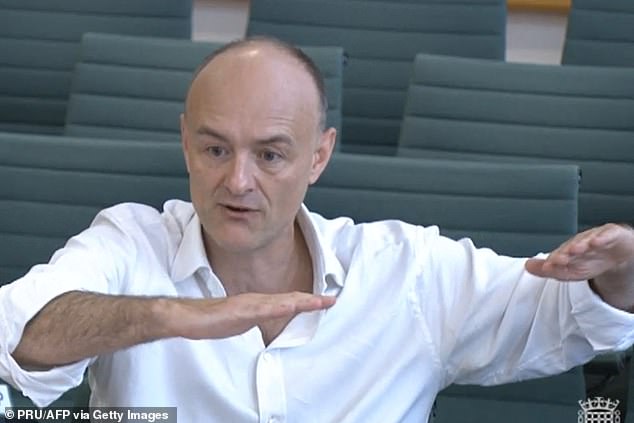 Professor Susan Michie, a psychologist at University College London and member of the Scientific Pandemic Insights Group on Behaviours said today: ‘Cummings does not appear to understand the role of SPI-B nor the contribution of behavioural scientists on that group.

‘SPI-B is not asked to comment, and has not commented, on what interventions are effective or when they should be triggered.

‘Instead, the group is asked to provide advice aimed at anticipating and helping people adhere to interventions that are recommended by medical or epidemiological experts.

‘It also considers the likely or possible impact of various measures or scenarios.’

She added the group had made it clear that ’empirical evidence was limited’.

The retort was echoed by Professor John Drury, a psychologist at the University of Sussex, who added: ‘Cummings implicated SPI-B in the flawed fatigue rationale for delaying measures against the pandemic… the SPI-B paper from March 2020 clarifies that fatigue should not be an interpretation of any SPI-B recommendations.’

SPI-B includes psychologists and social scientists advises the Government on how people think, behave and might react to certain situations.

It warned in a meeting on March 13 that ‘experience suggests it is harder to comply with a challenging behaviour over a long period than over a short period’ – but admitted there was no evidence in the context of lockdowns.

MATT HANCOCK  SAVAGED AND BRANDED A ‘LIAR’ IN DAMNING MEETING

Dominic Cummings accused Matt Hancock of ‘criminal, disgraceful behaviour’ during the early days of the Covid pandemic today as he launched an astonishing broadside at the Health Secretary.

During a no-holds-barred attack on the senior Cabinet Minister he accused him of being a serial liar whose behaviour directly hindered the Government’s ability to tackle the pandemic last year.

In a rollercoaster appearance in front of MPs today Mr Cummings outlined a series of failings by Mr Hancock and the Department of Health and Social Care.

Mr Cummings told a joint committee of MPs today: ‘One thing I can say completely honestly is that I said repeatedly from February/March that if we don’t fire the Secretary of State and get testing into somebody else’s hands, we’re going to kill people and it’s going to be a catastrophe.’

During the evidence, which even took the MPs on the Commons Health and Social Care and Science and Technology Committees by surprise, Mr Cummings said: ‘Like in much of the Government system, there were many brilliant people at relatively junior and middle levels who were terribly let down by senior leadership.

‘I think the Secretary of State for Health should’ve been fired for at least 15, 20 things, including lying to everybody on multiple occasions in meeting after meeting in the Cabinet room and publicly.

‘There’s no doubt at all that many senior people performed far, far disastrously below the standards which the country has a right to expect. I think the Secretary of State for Health is certainly one of those people.

‘I said repeatedly to the Prime Minister that he should be fired, so did the Cabinet Secretary, so did many other senior people.’

He added that Mr Johnson ‘came close’ to removing Hancock in April last year. Pushed on why he didn’t, Mr Cummings said: ‘That would be speculation on my part. There is certainly no good reason for keeping him.’

Mr Johnson’s spokesman today said the PM had full confidence in the Health Secretary and tonight Mr Hancock hit back at the claims made about him.

A spokesman said: ‘At all times throughout this pandemic the Secretary of State for Health and Social Care and everyone in DHSC has worked incredibly hard in unprecedented circumstances to protect the NHS and save lives.

‘We absolutely reject Mr Cummings’ claims about the Health Secretary.’

Minutes from the meeting read: ‘There is some evidence that people find quarantining harder to comply with the longer it goes on.

‘The evidence is not strong but the effect is intuitive. There is no comparable evidence for social distancing measures, but experience suggests it is harder to comply with a challenging behaviour over a long period than over a short period.

‘There is no strong evidence for public compliance rates changing during a major emergency. There is, however, a link between public anxiety and protective behavioural change.

A separate file from March 12 said: ‘We are concerned that our comments about the difficulty of maintaining behaviours should not be used as a reason for not communicating with the public about the efficacy of the behaviours.’

And it was used by some experts as an explanation for why the UK didn’t lock down sooner.

A consultant psychologist in London, Emma Citron, told the New Scientist in March last year: ‘If they ask people to self-isolate now and curtail public gatherings or they close schools, then people can become fed up with strictures and simply stop conforming to them.’

In Boris Johnson’s own TV speeches shortly before the first lockdown in March, he hammered home the importance of starting restrictions ‘at the right time’ to avoid doing them unnecessarily.

‘So we must not do things which have no or limited medical benefit, nor things which could turn out to be counterproductive.’

Mr Cummings today slammed fears about the message and claimed they had slowed down Britain’s movement into lockdown, although he denied saying that SPI-B were ‘charlatans’.

He told MPs: ‘Just to correct that I didn’t say that everybody involved with SPI-B were charlatans and that’s not the case.

‘The problem is that in this field of behavioural science there are a lot of charlatans and anybody who’s been involved with the clinical world knows that the whole field is riddled with duff studies, memes that people believe are true but aren’t true, and there is no doubt whatsoever that there’s a critical part of the false groupthink.

‘The problem is that in this field of behavioural science there are a lot of charlatans and anybody who’s been involved with the clinical world knows that the whole field is riddled with duff studies and memes that people believe are true but aren’t true – and there is no doubt whatsoever that there’s a critical part of the false groupthink.

‘One of the critical things that was completely wrong in the whole official thinking in SAGE and in the Department of Health in February and March was, first of all that the British public will not accept a lockdown, secondly the British public will not accept what was thought of as an East Asian-style track and trace type system and the infringements of liberty around that.

‘Those two assumptions were completely central to the official plan and were both obviously completely wrong.

‘In the first half of March this was raised sometimes in the Prime Minister’s office and me and others were literally pointing at the TV screen of Lombardy [Italy, the first part of Europe hit by the pandemic] and saying look at what’s happening in Lombardy.

‘We’re getting text messages on our own phones from our own families saying “what’s going on?”. This assumption that the public basically aren’t that frightened and don’t want to have a lockdown is false and we should abandon it.’