Austria will test EVERYONE at retirement homes: 130,000 residents and care workers will be screened for coronavirus in new ‘central focus’ of testing strategy

Austria is planning to test every person at retirement homes for coronavirus, the government announced today after a series of care home outbreaks across Europe.

Health minister Rudi Anschober said testing at care homes would be the ‘big, central focus’ as Austria begins to loosen the lockdown and enters ‘phase two’ of the crisis.

The new policy means that 130,000 people will be tested at 918 retirement and care homes across Austria, including every staff member, the minister said.

Those tests alone will nearly double the nationwide total of 162,816 tests carried out so far in Austria, which has a far higher rate of testing per head than Britain.

The Green politician also declared the country’s lockdown a success after the daily growth in new infections fell below one per cent.

Anschober contrasted the infection rate unfavourably with that in Britain, which had the worst rate on a graph he showed to journalists today. The minister said the UK rate was ‘frightening’ European policymakers. 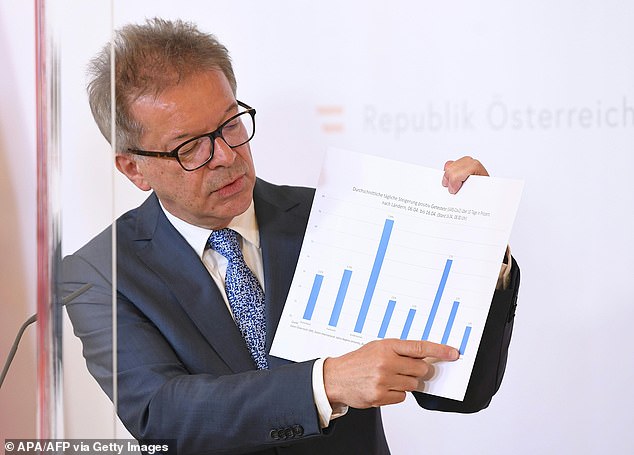 Austrian health minister Rudi Anschober, pictured at a press conference in Vienna today, says Austria will test everyone at retirement homes. The graph he is holding highlights a low infection rate in Austria (the furthest column right) and a high one in Britain (third from left)

Speaking at a press conference in Vienna today, the minister said ‘international experience’ showed that care homes were a major source of virus cases.

‘The big, central focus of the next weeks will be the testing of all workers and residents of retirement and care homes,’ he said.

‘Why are we doing this? Simply, international experience shows that this area is the area with the greatest risk.’

Studies from across Europe showed that a high number of coronavirus deaths were linked to care homes, the minister said.

Some countries have banned visits to care homes to stop the virus spreading to older people, who are typically more vulnerable to the disease.

There have also been widespread reports across Europe of care home outbreaks which have not been fully documented in official figures.

Unions, health workers and relatives in Lombardy, the worst affected region in Italy, have reported the death of scores of patients who were never tested for the virus.

France’s death count has surged after it began including numbers supplied voluntarily from homes, but these figures are not complete. 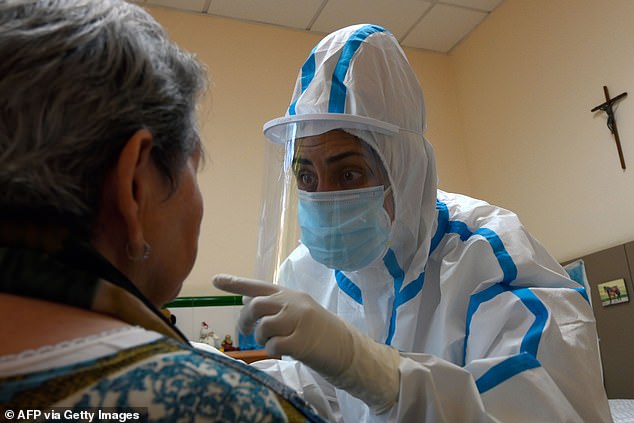 Care homes have been a worrying source of virus cases across Europe (pictured, a medical worker takes a sample from a care home resident in Spain yesterday)

The minister was responding to reports that as many as half or even two-thirds of care homes had suffered a virus infection.

On the testing of care workers, Mr Hancock said: ‘1,500 were tested the day before yesterday, which is the latest figures that I’ve got.’

Another 4,100 have been referred to testing, which means ‘the test is immediately available to them’, he said.

However, Britain has not pledged to test everyone at care homes in the way that Austria has.

Some 918 care homes and retirement homes across Austria will be tested ‘comprehensively,’ Mr Hancock’s counterpart said. 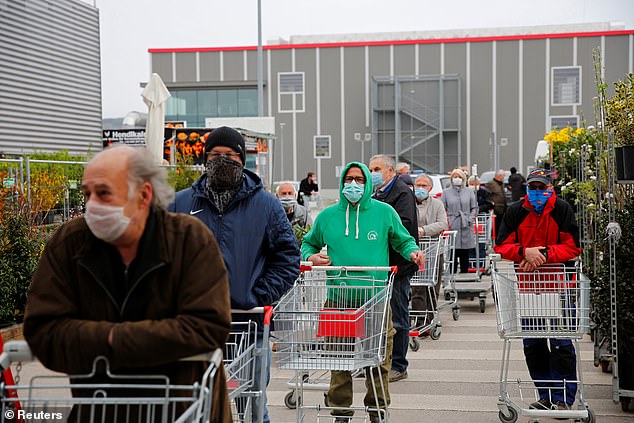 Customers push trolleys outside a hardware store in Eisenstadt on Tuesday, after the Austrian government allowed some shops to re-open with a view to opening others on May 1

Put another way, Austria has tested around one in 54 people for coronavirus compared to Britain’s rate of one in 159 people.

So far Austria has reported just 410 deaths in total, fewer than some larger countries are suffering each day.

Anschober told reporters the daily increase in cases was now 0.9 per cent, which he said was the lowest rate in Europe.

The care home testing policy will require a further 130,000 tests, almost as many as have already been done.

Ministers say they will also be testing workers at shops which have re-opened this week to assess whether the loosening of the lockdown has caused new infections.

Austria allowed small shops to re-open from Tuesday with a view to opening larger ones on May 1 if there is no surge in infections.

It has said it will be on the lookout for any acceleration in infections and will delay its step-by-step loosening of its lockdown if necessary.

Austria also has some lingering hotspots of infection under quarantine, including the ski resorts of Ischgl, St Anton am Arlberg and Soelden.