While the legal framework for a transfer does not exist, New Zealand Prime Minister Jacinda Ardern has left open the chance that Brenton Tarrant could be sent home to Australia to serve his term.

On Thursday, Tarrant admitted guilt for last year’s massacre, when he travelled to two Christchurch mosques and opened fire during Friday prayers. 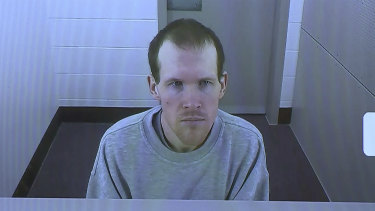 In this image made from a video, Brenton Harrison Tarrant appears in court via video link on Thursday.Credit:AP

The man, who was raised in Grafton, NSW, was convicted on 51 counts of murder, 40 counts of attempted murder and one count of terrorism after his surprising change of heart to his plea.

He is expected to face life in prison, however sentencing is unlikely to take place for some time.

New Zealand High Court Justice Cameron Mander signalled his intent to delay sentencing until New Zealand’s state of national emergency has been lifted, to allow survivors and families of victims to attend the hearing.

The country is currently under a severe lockdown as the Ardern government attempts to fight the spread of the coronavirus.

On Friday, Ardern said she would countenance a move only after the sentencing.

"This needs to run its course. Victims still haven't seen the terrorist in this case be sentenced. For them there is still a way to go," she said.

"Let's make sure that first justice is seen to be done before we talk about what happens potentially beyond New Zealand."

A spokesperson for Australian Attorney General Christian Porter said the two governments were not talking about the switch.