The U.S. Army has started to weed out unvaccinated soldiers by blocking their re-enlistment, including Reserve troops and Guardsmen.

Secretary of Defense Lloyd Austin on Aug. 25 directed all military branches to ensure service members receive the vaccine as COVID case numbers surged over the summer.

Fox News obtained a Nov. 16 memorandum from Secretary of the Army Christine Wormuth detailing how commanding officers should flag soldiers who refuse COVID-19 vaccination orders, which will allow the service to retire the troops or separate them “upon expiration of term of service.” 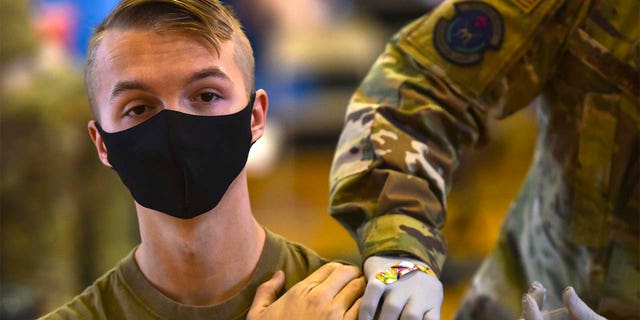 In this Feb. 9, 2021 photo provided by the Department of Defense, Hickam 15th Medical Group host the first COVID-19 mass vaccination on Joint Base Pearl Harbor-Hickam. By the thousands, U.S. service members are refusing or putting off the COVID-19 vaccine, as frustrated commanders scramble to knock down internet rumors and find the right pitch that will convince troops to take the shot. Some Army units are seeing as few as a third agree to the vaccine, others are higher. (U.S. Air Force Tech. Sgt. Anthony Nelson Jr./Department of Defense via AP)
(AP)

Flagged troops will also see suspension from “favorable personnel actions,” according to the memo. Such actions include but are not limited to reassignment and promotion, attending military or civilian schools, and earning decorations and awards, according to Wormuth’s memo. Soldiers refusing the vaccination will be given a General Order of Reprimand unless they are given a religious or medical vaccine exemption.

“In conjunction with this policy, I authorize commanders to impose bars to continued service … for all Soldiers who refuse the mandatory vaccination order without an approved exemption or a pending exemption request,” said the memo signed by Secretary Wormuth.

Soldiers will remain flagged until they are fully vaccinated, receive an approved medical or administrative exemption, or are separated from the Army.

Separation is a term used to describe a person leaving active duty, but not necessarily leaving the service entirely. 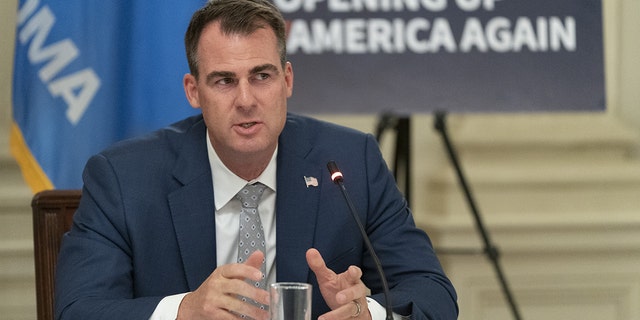 Kevin Stitt, governor of Oklahoma, speaks during a meeting with U.S. President Donald Trump and governors in the State Dining Room of the White House in Washington, D.C., U.S., on Thursday, June 18, 2020. Trump today seized on a pair of Supreme Court defeats on gay rights and immigration this week to rally his conservative base, pledging to redouble his efforts to transform federal courts. Photographer: Chris Kleponis/Polaris/Bloomberg via Getty Images
(Chris Kleponis/Polaris/Bloomberg via Getty Images)

The issue of vaccinating some parts of the military – particularly the National Guard – has led to heightened tension between state and federal officials regarding who has authority over what troops.

Oklahoma Gov. Kevin Stitt recently told his state’s National Guardsmen that they do not need to comply with President Biden’s vaccine directive.

Unless federally mobilized, the Guardsmen will not have to become vaccinated for COVID-19, according to an order issued Thursday by new Adjutant General Thomas Mancino. No negative administrative or legal action will be taken against Guardsmen who refuse the COVID-19 vaccine.

Stitt recently appointed Mancino to replace Adjutant General Michael Thompson, who had lead the Oklahoma National Guard since 2017, The Oklahoman reported. By comparison, Thompson had supported vaccination for most Guardsmen, with some exceptions. 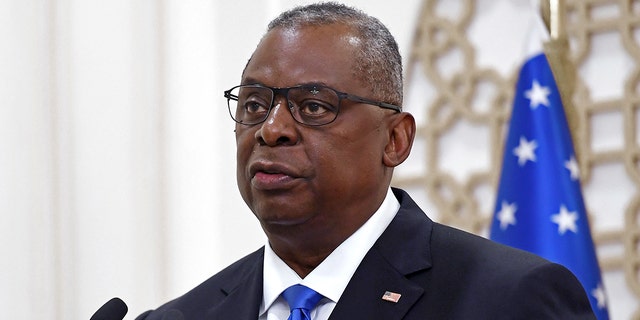 “This policy is not anti-vaccine. I and the Governor are both vaccinated,” Mancino said in a statement published on Saturday. “I encourage all our Oklahoma Guard Members to get vaccinated if they choose to do so. We want to educate and inform our Soldiers and Airmen so that they can make an informed decision regarding the DoD Vaccine Mandate.”