Now coughing is a crime: Anyone who deliberately splutters at emergency workers while claiming to have coronavirus faces two years in prison

Anyone caught deliberately coughing at emergency workers while claiming to be infected with coronavirus could face up to two years in prison.

People who cough at NHS staff and police officers using Covid-19 ‘as a weapon’ will be charged with common assault by the Crown Prosecution Service.

Assaults against emergency workers can be punished with up to two years in prison, as police are given sweeping powers to enforce Boris Johnson’s lockdown.

Max Hill QC, Director of Public Prosecutions, said: ‘Emergency workers are more essential than ever as society comes together to tackle the coronavirus pandemic.

‘I am therefore appalled by reports of police officers and other frontline workers being deliberately coughed at by people claiming to have Covid-19.

‘Let me be very clear: this is a crime and needs to stop.

‘The CPS stands behind emergency and essential workers and will not hesitate to prosecute anybody who threatens them as they go about their vital duties.’ 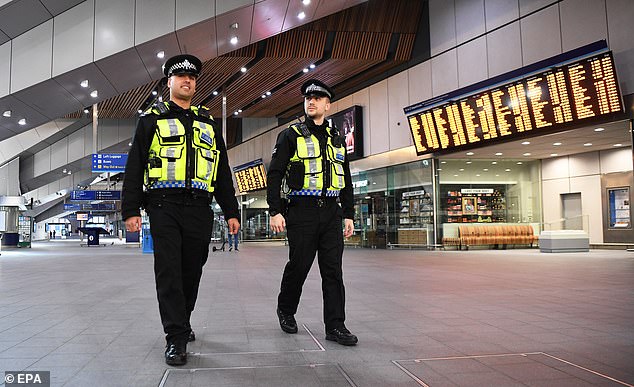 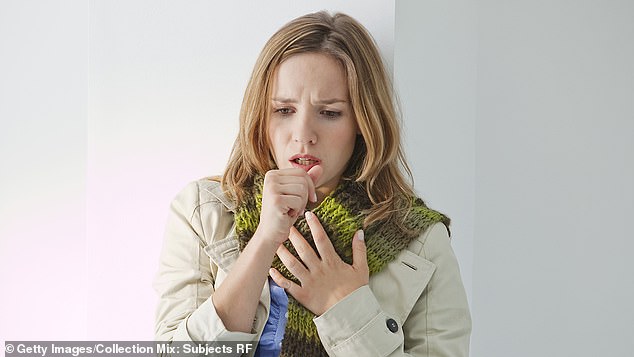 Assaults against emergency workers can be punished with up to two years in prison, as police are given sweeping powers to enforce Boris Johnson’s lockdown (stock) 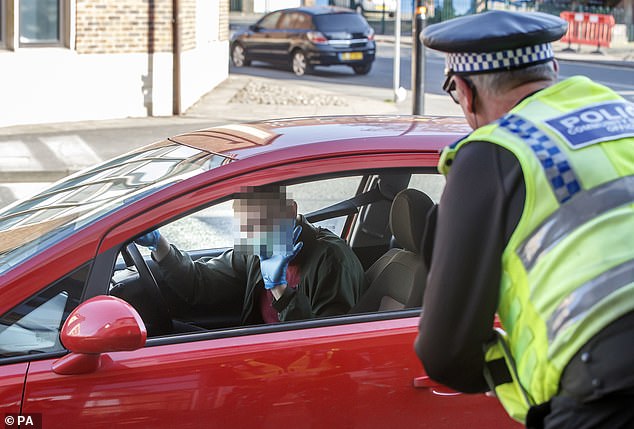 It comes after two suspects were convicted of coronavirus-related crimes yesterday, in the days following Mr Johnson’s unprecedented shutdown.

Darren Rafferty, from Dagenham, east London, admitted three counts of assaulting an emergency worker after claiming to have coronavirus and directing coughs at Met Police officers arresting him for GBH at Barkingside Magistrates’ Court.

The 45-year-old will be sentenced at Snaresbrook Magistrates’ Court next week.

David Mott, from Blackburn, Lancashire, was sentenced to 26 weeks in prison yesterday after threatening to spit at police officers.

Officers asked him what he was doing out with two others after the PM placed Britain under de facto house arrest on Monday. 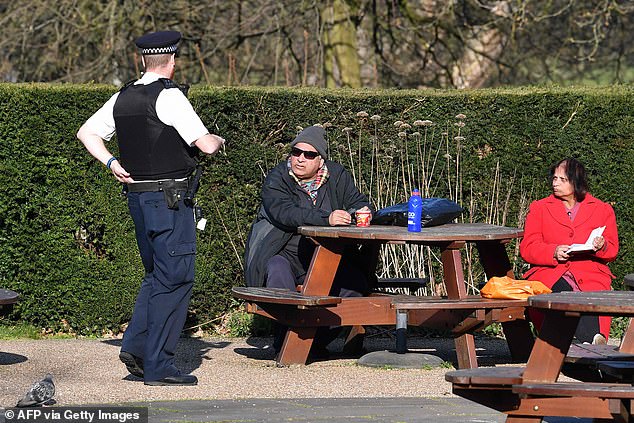 A police officer speaks to a couple in Greenwich Park, London, to enforce social distancing rules after the PM’s lockdown – announced on Monday night – escalates

West Yorkshire Police officers also reported being coughed and spat at by a large group of youths at a serious incident on Saturday night.

Man jailed after spluttering over police officer in Covid-19 age 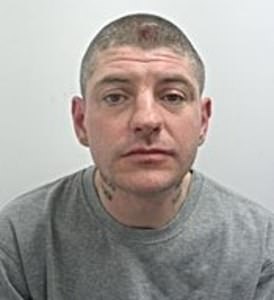 David Mott, who coughed over police

A man who spat at a police officer after being stopped to be given advice about social distancing for Covid-19 has been jailed for 26 weeks.

David Mott, 40, of no fixed address, appeared at Blackburn magistrates yesterday where he was sentenced for offences including using threatening behaviour towards a police officer.

Mott was also charged with possession of an offensive weapon and possession of a controlled class B drug. He was arrested after being stopped whilst out in a group following the Government guidelines to stay at home.

Officers carried out the stop and check on Green Lane, Padiham, on a vehicle containing three individuals, including Mott, on March 24 when Mott became abusive ‘coughing and spitting’ at the officers on several occasions.

His crime was called ‘particularly offensive and dangerous public order offence at this particular time coughing and spitting towards an officer’ by the court.

An RSPCA office rescuing a stranded swan in Hull was told ‘have corona b***h’ as a gang of youths spat in her face after she asked them to move away.

New coronavirus-related crimes have been slammed by human-rights advocates fearful of the new powers afforded to police and the state.

Liberty group called the incoming Coronavirus Regulations ‘without doubt the biggest restriction on our individual and collective freedoms in a generation’.

Director Martha Spurrier warned people of ‘the extent of its powers, and how long they can be in place for’.

She claimed: ‘It gives the authorities new powers to detain any one of us that they deem to be potentially infected with the coronavirus. It also removes vital safeguards in care standards, leaving many people who are already at risk, such as disabled people, at further risk, not only of poor care but also of potentially inhumane treatment.

‘The breadth of this legislation is also extraordinary. It runs to more than 300 pages and includes some spectacular restrictions, including powers to rearrange or cancel elections.’

Ms Spurrier added: ‘We’ll beat this virus, but these measures must be a last resort in that battle and these powers must be removed as soon as possible.

‘We cannot and must not sacrifice all of our hard-won rights and freedoms.’

In November 2018, the Assaults on Emergency Workers Offences Act was brought into power to bring stricter punishments for anyone who abuses frontline staff. Since then, the CPS has prosecuted 20,000 such cases.

‘An attack on them is an attack on us and on the state, and it should be punished more severely than an attack simply on an individual victim’.